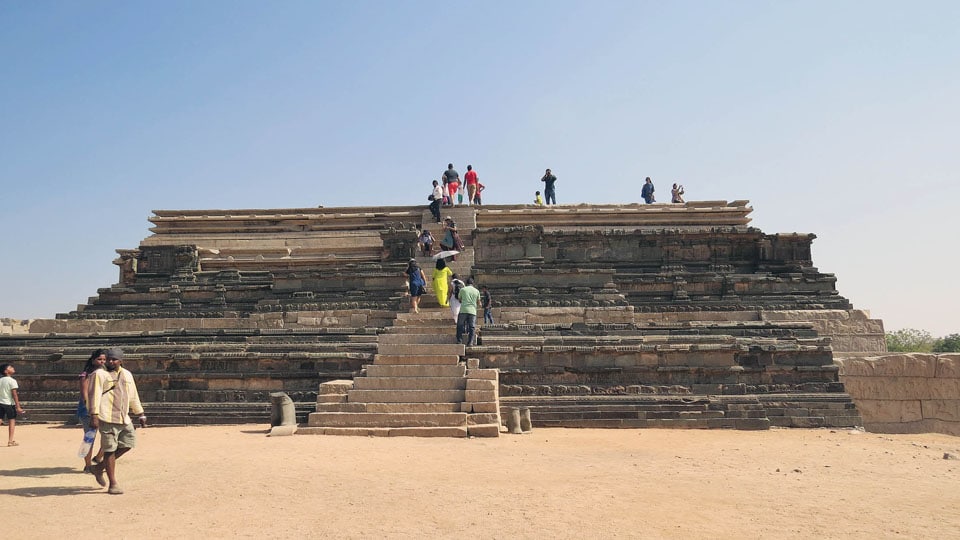 Dasara is one of the most popular festivals in India but celebrated in a variety of ways in different parts of the country. The underlying factor is victory of good over evil, which has been our motto from the Puranic times to the present. In fact, every country in the world has this as its aim and it should be so, even if there are different political systems and ideologies. This also strengthens our ideology of unity in diversity.

The word ‘Navaratri’ is of greater antiquity as compared to the word ‘Dasara.’ The word Dasara is derived from the Sanskrit word ‘Dashahara’ meaning ten days. They are calculated from ‘Shukla Padya’ to ‘Dashami’ of the month of ‘Ashvayuja’ of each year in Hindu cyclic calendar. Actually Navaratri is the festival of Mother Goddess. This Goddess amalgamated all power and prowess from no less than Gods Shiva, Vishnu and Agni to protect the good from the evil. Thus was born Devi, the indomitable energy personified, who performed her task and brought joy to the good.

The Goddess assumed the nine forms as follows:

Thus the Goddess assumed these nine forms (nine days) and accomplished her task. Each one of them is worshipped on the nine days with special pujas in almost all the temples. This is more so in Tamil Nadu, Andhra, Kerala and Karnataka.

Mysuru being the home of the successive Maharajas, the worship is more popular in temples of Mysore Palace and other temples including Sringeri.

Vijayanagar is considered as the golden period of South Indian history. This is historically true because of the large number of gold coins minted and issued by these rulers and also for the devotion they had towards the Goddess. Fortunately, many foreign travellers visited the Navaratri of Vijayanagar period and have left behind their appreciating testimony of this festival. Foreign visitors who saw the Navaratri of Vijayanagar period are Persian traveller Abdul Razzak (1442-43) when Devaraya II was the King. He admired by saying at each stage and each chamber presented a new and charming sight. He has also described the various acrobatics.

Under this background, the Dasara of Vijayanagar period in general and Krishnadevaraya in particular may be described. Dasara was performed with great pomp. It lasted for nine days and that year it started on 12th September of 1520 AD. The Palace had a gate opening to the verandah and over this was a tower of the same height. Wooden scaffoldings were mainly erected for this purpose.  A big idol of the Goddess was kept on the large dais and opposite to it was another dais where was kept the throne. The wood work is covered with silks of many colours and had a painting of lion. The silver and gold plates were studded with rubies and sea-pearls. All round were kept golden images of Gods and Goddesses.

The king came to this house of victory and performed worship with the help of Brahmin priests. Then came dancing girls, dancing to the tune of music. The king took a basketful of flowers and worshipped the horses first and the elephants next. After this he went into the place where brahmins were seated and took blessings from them. Then again he prostrated before the Goddess. Then the captains of the army walked up to Krishnadevaraya and performed salam to him. With this, the religious ceremony came to a close for the morning.

In the afternoon, all people occupied their seats in the arena to witness the ceremony consisting of the works by wrestlers, dancing girls, elephants, riders with shields, javelins etc. Brahmins, officers and relatives of the king entered through a special gate. Then came Saluva Thimma, the great Minister who took control of the situation.

When everything was done properly, Krishnadevaraya came and sat on the throne. He had put on the white dress covered with flowers of gold embroidery, jewels, pearls and diamonds. An assistant held the royal insignia. The chauri-bearers fanned the king. The chauris had golden handles.

Then nobles and feudators came one by one, touched the feet of Krishnadevaraya and gave valuable presents which the king graciously received. Traveller Domingo Paes was amazed at the rich presents, as well as the ornaments worn by the king. Wrestling was another important item which was witnessed by the people. The wrestlers fought unto the last. First aid was given to the seriously injured.

When it became dark, the entire arena was lit by many types of lights and hence it looked like a day. Many entertainments were shown to the king and people also enjoyed them. Different sorts of fireworks were displayed. Then came the State umbrella of the king. Parade of the horses was highly attractive. These horses seem to have been brought from Portugal. That is the reason they looked strong and sturdy and were capable of hard work not only in ceremonial parades but also in wars. After all this, the king retired to the Palace. The brahmins took back the idol into the Palace. Thus Krishnadevaraya celebrated Navaratri for nine days.

On the tenth day which was the Vijayadashami Day the king held a review of all his forces. This also helped the king to understand the readiness of the army in case of any aggression by enemy kings. The entire Dasara was so absorbing and interesting that people from the city as well as nearby places made preparations and came to the place. The officers arranged food and shelter to all of them in different houses or tents. This also showed that Krishnadevaraya was gentle and kind and arranged every need of his subjects.

Domingo Paes was provided with a good and trained horse to move about. He had to turn right, left, back and front and he fell from the horse out of giddiness. This only speaks volumes for the grand procession of the Dasara. Before closing this note it may be said that the same type of Dasara continued during the successors of Krishnadevaraya also; but this grandeur was not seen. That is the greatness of Krishnadevaraya’s Dasara.

However, the same procedure was followed by other dynasties including the Maharajas of Mysore with suitable changes to suit the needs. Thus Vijayanagar Dasara made a great impact on the successive centuries also. Perhaps that grand spectacle was never repeated in later years. That is the greatness of Vijayanagar Dasara.

Dasara Pages from History Prof. A.V. Narasimha Murthy Vijayanagar Period
The Road not to be taken
Of Common Salt and Common Sense !