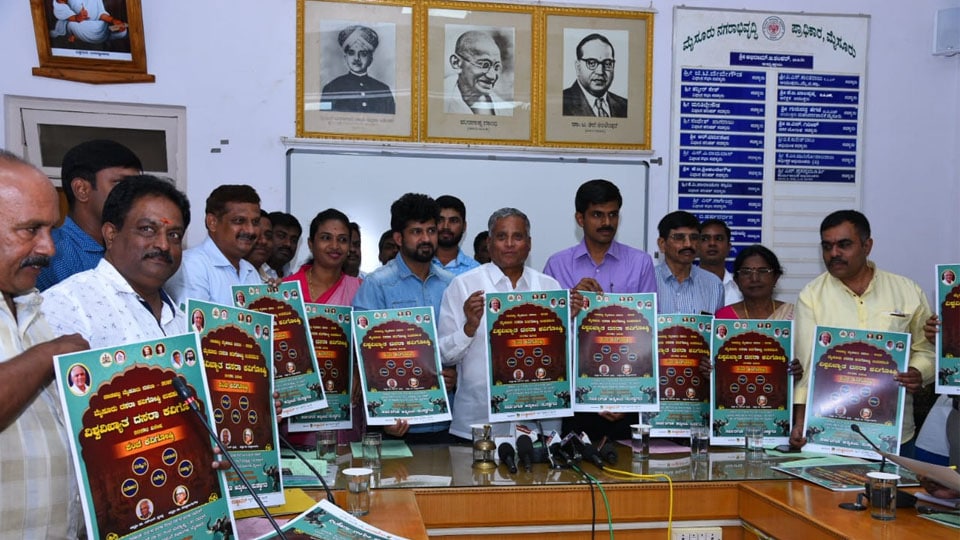 Speaking after releasing the Dasara Kavigoshti poster at MUDA Auditorium, he said that opportunities would be given to four selected poets from Mandya, Chamarajanagar, Hassan and Kodagu districts to present their poems during the event and eight poets would be selected from Mysuru to render poems penned by them.

While four poets from districts under Mysuru division would be rendering their poems in the first four categories, Vikyata will witness poets from all 31 districts of the State taking part in the event and rendering poems in respective local languages such as Kodava, Tulu, Konkani, Lambani and others.

This year’s Kavigoshti will be inaugurated by noted poet Dr. Doddarange Gowda on Oct. 2 at Jaganmohan Palace and the event will be held between 9.30 am and 1.30 am everyday, he added.

The Sub-Committee has also invited local talents such as Amma Ramachandra,  Sri Harsha, Keerthana Vijaykumar, B.V. Pradeep, B.V. Praveen, Shashikala, Dundiraj, Nagesh Kandegala and others to render famous poems during the five-day event. A souvenir of Dasara Kavigoshti would be released during or after the poet’s meet. The souvenir will be printed through Publishers’  Association in city.

This year, the organisers have ensured that the honorarium to poets reached on time. Payments to the poets will be made online on the spot as soon as the completion of the event, said Manjunath. MP Pratap Simha, Committee Vice-President Chikkamma Basavaraj and DC Abhiram G. Sankar were present.

Dasara Kavigoshti
Collection of discourses to be released on Sept.26
First batch of additional Police force to arrive in city on Sept. 27