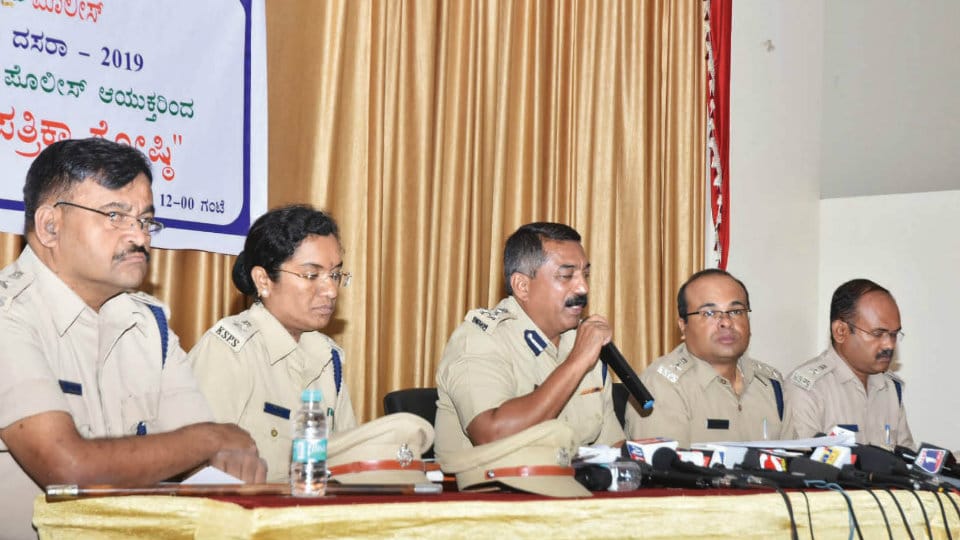 First batch of additional Police force to arrive in city on Sept. 27

Mysuru:  With Dasara festival just five days away, the first batch of additional Police force to provide security to city comprising Police personnel from various districts, will be arriving in city on Sept. 27.

The first batch comprising about 2,000 Police personnel from other districts will arrive on Sept. 27 and the second batch is expected to arrive in the first week of October.

The Police personnel, who will be part of Dasara security in the city, will be accommodated in schools, colleges, community halls, Kalyana Mantaps, lodges etc.

Addressing a press conference at a private hotel in city this morning, City Police Commissioner K.T. Balakrishna said that Dasara security will be done in two phases — from Sept. 29 to Oct. 5 and from Oct. 6 to Oct. 8.

He further said that a total of 8,407 Police personnel including 2,978 Police personnel from city, 4,429 Police Officers and staff from various districts and 1,000 Home Guards would be deployed for Dasara security.

Police personnel, who will be providing security at Mysore Palace and at Torchlight Parade Grounds in Bannimantap would be provided with Body Worn Cameras and the footages would be recorded at the Mobile Command Centre.

Bengaluru CCB Police personnel, Narcotics Control personnel of the CID and Officers and staff of the Crime Division from across the district will be deployed to prevent crimes. Sixteen Fire and Emergency Services teams and 16 ambulances will be stationed at all Dasara programme venues and anti-social elements have been warned during Rowdy Parade not to indulge in anti-social activities.   Information books and booklets

A booklet of Karnataka State Police Band pertaining to its formation, development and achievements is being prepared and information books to visitors containing information about various tourists spots in and around Mysuru, hotels, transportation, emergency service centres etc. is also being prepared.  Booklets containing instructions to the public and on the role of Police in successful celebration of Dasara is also being brought out.

20 Police Help Desks will be established at 20 places in city to help visitors in providing information about Dasara from Sept. 29 to Oct. 8. The Help Desks will function from 9 am to 10 pm and Pravasi Mithras of the Tourism Department, Tourism students and NSS Volunteers would be deployed at the Help Desks.