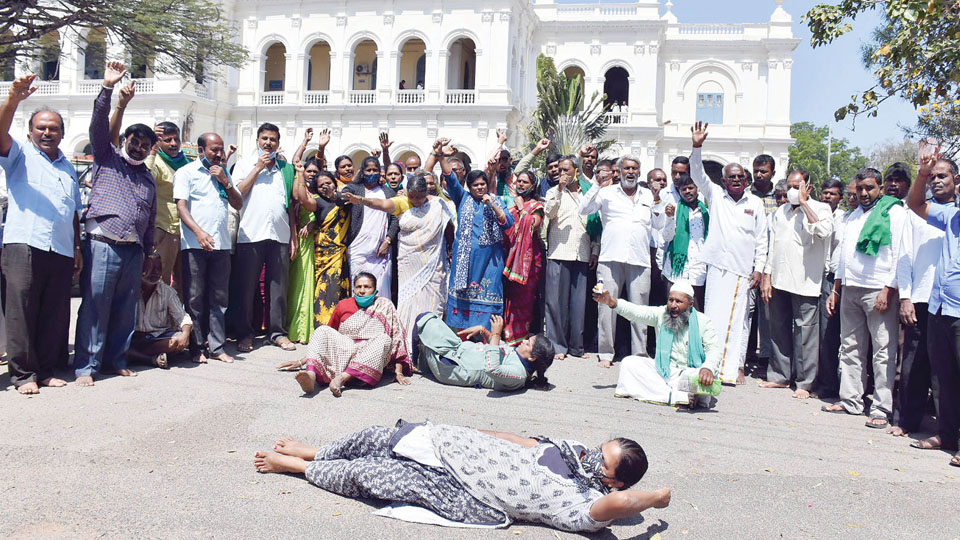 Mysore/Mysuru: The indefinite stir launched by depositors of Green Buds Agro Company in front of the Deputy Commissioner’s (DC) Office in city protesting against what they called ‘official apathy’ in returning their deposits, entered the second day today.

Green Buds Agents and Investors Welfare Committee President Lakshmidevi said that the DC and other authorities should take a serious note of their plight. She threatened that the depositors would commit suicide at the protest site itself by consuming poison if the authorities failed to resolve their issue by today evening.

The company had its head office in Mysuru and had 72 branches across the State. It provided job opportunities to nearly 40,000 youth and netted more than two lakh customers. It shut down suddenly and the depositors lost the invested money.

Even as the protest was on, Hussain Peer, one of the cheated investors from Ballari district, attempted to consume poison but the Police prevented him from taking the extreme step and shifted him to K.R. Hospital.

Committee General Secretary Baradanapura Nagaraj said that the DC should visit them to hear out their problems. Claiming that officials have ignored the issue, he warned that the investors will gather in thousands before the Vidhana Soudha in Bengaluru when the Budget Session of the Assembly begins and stage an indefinite dharna.

Addressing the protestors on the first day yesterday, farmer leader and Karnataka Sugarcane Growers Association President Kuruburu Shanthakumar, who is spearheading the protest, claimed that Green Buds had cheated over 2 lakh depositors across the State to the tune of over Rs. 200 crore.

Pointing out that though the State Government in 2016 had ordered the officials to confiscate the properties of the company and return the deposits to investors after auctioning the properties, he said that the officials are apathetic in implementing the order which has caused a lot of hardship to depositors.

Accusing the Assistant Commissioner of undue delay in submitting investor and seized properties documents to the Court, Shanthakumar maintained that the cheated investors had filed a case eight years ago and no substantial progress has been made on return of deposits since then.

Deputy Commissioner Rohini Sindhuri, who visited the protest site last evening, went back in disappointment after the protestors alleged that the authorities were not serious and were only giving false promises so far.

Later, Assistant Commissioner Venkatesh assured the protestors that a report will be submitted to the Court in 45 days. But not paying heed to the promise, the protestors continued their stir and cooked food at the spot.