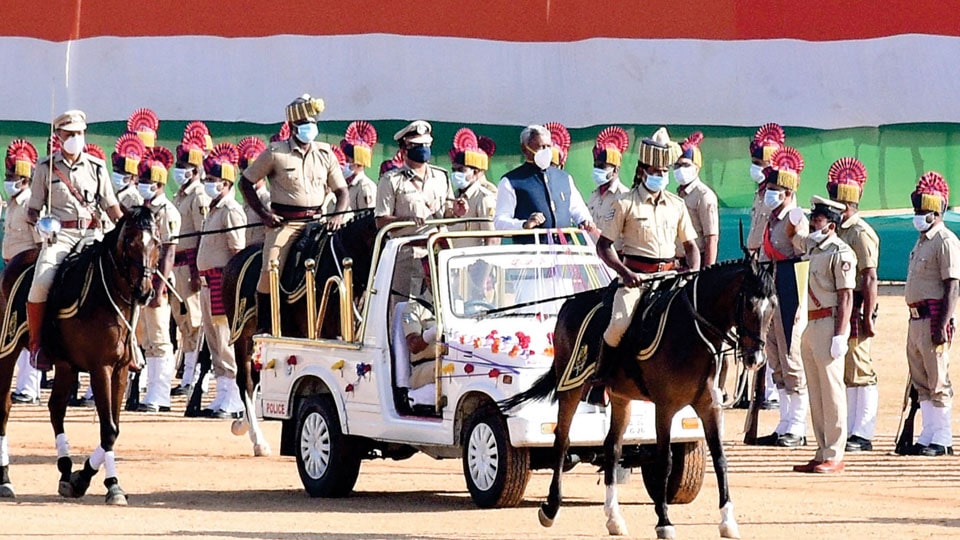 DCs to stay overnight in villages, address problems on spot

Programme to be launched next month: District Minister announces at Republic Day event

Mysore/Mysuru: In a bid to take the administration to door steps of rural people, the State Government will launch a new programme ‘Jilladikarigala Nade Halli Kade‘ (Deputy Commissioner marches towards villages) from February to find solutions on the spot, said Co-operation and Mysuru District Minister S.T. Somashekar.

He was speaking after unfurling the National Flag at Torch Light Parade Grounds in Bannimantap here as part of the 72nd Republic Day celebrations here yesterday.

The celebration was scaled down due to COVID-19 and the number of contingents in the march-past had been restricted to just two, Police and Home Guards. Cultural programmes, presented by the school children every year, did not take place this time due to the threat of the pandemic. The Minister inspected the parade and received the guard of honour.

Speaking on the occasion, Minister Somashekar said, as part of this novel programme, the DCs, along with heads of various Departments, should visit villages, stay back in villages and try to solve local problems on the spot. This would prevent villagers from frequenting the DC’s office to get their works done. It would be launched next month across the State, he said adding that villagers must take advantage of the same by getting their problems redressed at local level.

Saying efforts were on for overall development of district, the Minister said that the contagion that had gone out of control a few months ago, was now under total control, thanks to the good management by the district officers who conducted record number of RT-PCR test. The Corona Warriors deserved full complement from the State Government for working day and night. As many as 42,000 vials of Covishield vaccine had arrived in city with which almost all healthcare workers had been vaccinated so far. Karnataka has been in forefront in COVID-19 management and Prime Minister Narendra Modi has complimented the State for successfully launching ‘Atmanirbhar’ scheme.

Explaining the importance of Republic Day, Somashekar said it was the first national festival of new year and every citizen must celebrate it with a sense of proud. It was also the day of implementation of the Constitution on 1950. The country has got the excellent Constitution, thanks to efforts of Dr. B.R. Ambedkar. After review and amendments, the Constitution was accepted on Nov. 26, 1949 and came into effect from Jan. 26, 1950.

The Minister said that the Government of India has been supporting all projects of the State since last six years. As much as Rs. 1.16 lakh crore has been earmarked to be spent on improvement of National Highways in the State. Under Kisan Samman, the Centre was paying an incentive of Rs. 6,000 to each farmer and the State Government was giving Rs. 4,000. The Department of Co-operation has set a target of disbursing Rs. 15,300 crore loan to 24 lakh farmers through the Department. Already, Rs. 12,500 crore loan had been disbursed to 19.5 lakh farmers. “I am personally visiting all District Credit Co-operative banks to see its implementation,” he added.

He said ‘Swachha Sarvekshan’ survey was on to decide on the ‘Clean City’ in country and Mysureans must respond to it positively by keeping their surroundings clean. As part of protection of cleanliness, tender process was on for establishing Solid Waste Treatment Plants at Kesare and Rayanakere at an estimated cost of Rs. 41 crore. Works are expected to begin soon, he added.

On this occasion, the Minister distributed laptops to three students of Government Schools who scored highest marks in SSLC 2020 exams.