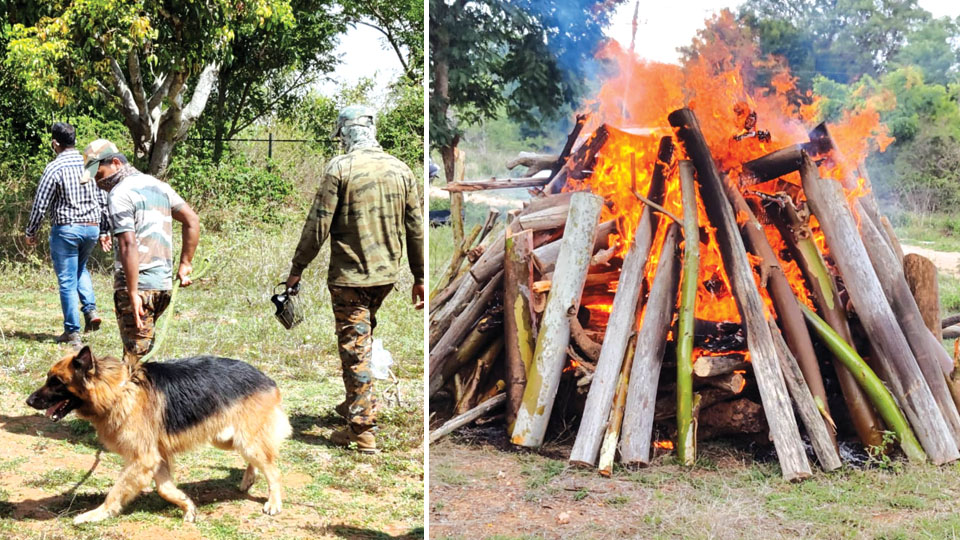 Mysore/Mysuru: The Police and the Forest Department have taken the case of killing three leopards in Mysuru seriously. The felines were found dead yesterday in a poisoning case.

Teams have intensified their investigation to nab the miscreants involved in this heinous crime. This is for the first time that an incident of leopard poisoning has taken place in Mysuru area.

The carcass of the leopardess and her two cubs were found by a few villagers in the early hours of yesterday morning at a coconut and mango plantation in Belavadi. Poison-laced food in a plastic packet and a half eaten carcass of a dog were also found nearby.

Early reports yesterday had indicated that someone wanted to kill a dog by poisoning and the leopards were killed as the felines had consumed the dead dog meat. Later it turned out that the dog was killed intentionally and after its death, pesticides were poured on its carcass. The leopards died after consuming the pesticide-laced dog carcass.

After registering a case under the Wildlife Act, post-mortem was conducted and the samples of the dead leopards were sent to the Forensic Science Lab (FSL) and Institute of Animal Health and Veterinary Biologicals in Bengaluru. The carcasses were cremated in the presence of Forest officials.

Meanwhile, the officials, who had summoned Police sniffer dogs and the dashing German Shepherd Rana of Bandipur, pressed them into service. Rana, along with the Police dogs, who began their search, went to a house and stopped there.

The officials said that though it appears that the leopards had died of poisoning, the exact reason would be known only after receiving the reports from the two laboratories on Monday or Tuesday. Rana, the terror for poachers, smugglers and other forest criminals, has retired from service, but considering his ability and capabilities his service has been extended and is housed in Bandipur Tiger Reserve.

During his service at Bandipur, he had solved many poaching and smuggling cases, by tracing the miscreants at their homes besides rendering his services in tracing elusive tigers, which had created menace in villages bordering the forest.

Karnataka Forest Department leopard
COVID Lockdown: Chief Secretary instructs Cops to arrest those arguing with them
Mines and Geology Dept. to part with 30 percent of its revenues for COVID management