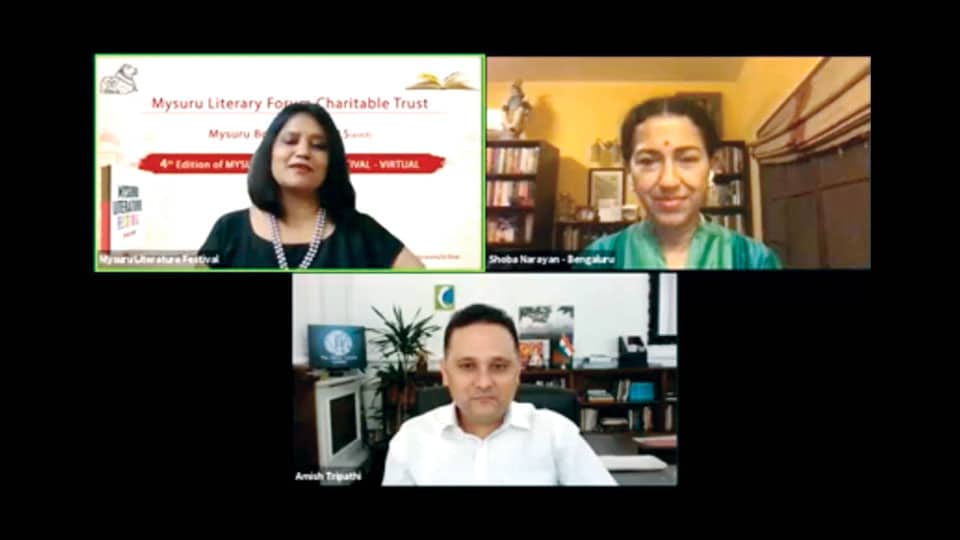 Mysore/Mysuru: “We have a historical baggage today where we have suffered horrific and brutal invasions and we have not even made peace with it or spoken honestly about it. Unfortunately the debate on this is stuck at two extremes,” said Amish Tripathi, writer, author, columnist and diplomat.

He was in conversation with journalist and author Shoba Narayan at the concluding session of the Fourth Mysuru Literature Festival 2020 virtual session organised by Mysuru Literary Forum and Charitable Trust and Mysuru Book Clubs-2015 last evening. He was speaking from London on his book “Suheldev: Silent Hero of History.”

“There is a certain amount of poison that exists in our society today and in the debate on that we are struck between two extremes. One side wants us to believe that the foreign invaders before the British rule were wonderful men who played sitar and sang ghazals. But this is not true, they were horrific individuals,” he said.

Tripathi said, “While one section is not ready to speak frankly on the brutal foreign invasions and the sufferings at the hands of marauders, the other section blames the present-day people, fellow Indians, for the crimes committed by foreign invaders. Thus, there is a need to tell plain truth.”

Talking about his book ‘King Suheldev,’ he said that he was influenced by the King because he was a devout worshipper of Lord Shiva like he (Tripathi) himself was and also like the greatest emperor Rajendra Chola.

“I was both inspired and saddened. King Suheldev from a subaltern caste puts together people from all caste and religions and inflicts such a devastating defeat on the Turks. What an inspiring story. But at the same time I was saddened how come I have not heard of him. In any other country, there would have been statues in all corners. He actually existed about a thousand years ago. My book is a historical fiction based on actual facts. He was from Shavasthi, close to Ayodhya (my father’s family is from Benares) and I hadn’t heard about him. Hence I decided to write about it to tell modern India,” he said.

Alluding to the subaltern caste and higher caste, Tripathi said that India is the only country which has existed from the pre-Bronze age culture and said that there were many great rulers including the Marathas who belonged to the subaltern caste and not the Kshatriyas and Dr. B.R. Ambedkar in his book “Who were the Shudras?” said that castes were neither birth-based nor rigid even 1,500 years ago. Only later did castes become rigid and a weakness for India as it promoted divisions, resulting in defeats in the hands of foreigners.

A question and answer session followed. Book Clubs 2015 Founder Shubha Sanjay Urs welcomed and proposed a vote of thanks.