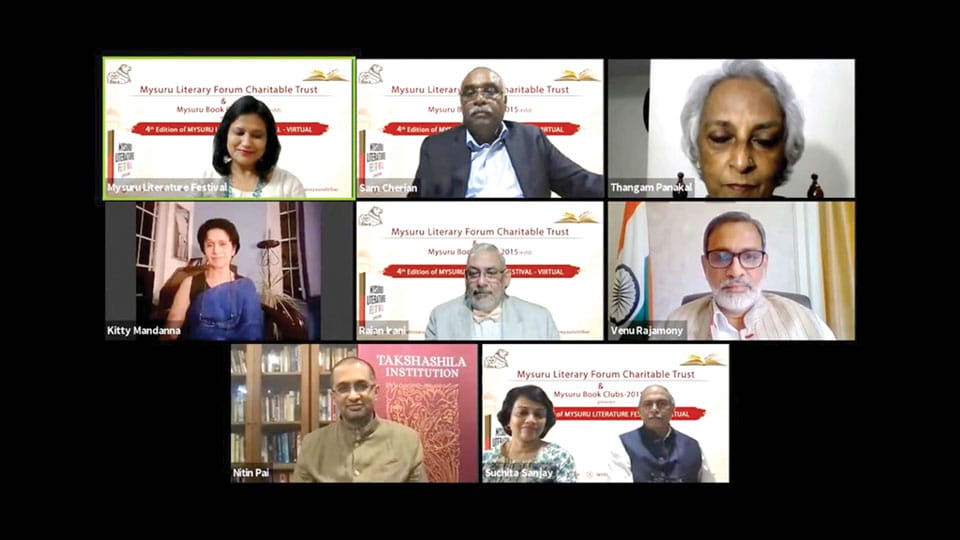 Mysore/Mysuru: India has a potential to grow and conscious efforts to label the country as a Super Power is not proper as India has still a long way to go, said Indian Ambassador to The Netherlands  Venu Rajamony.

He was speaking at a session on ‘Turning Diplomatic Experience into Chronicles,’ as part of Mysuru Literature Festival 2020, hosted by Mysuru Literary Forum and Charitable Trust and Mysuru Book Clubs – 2015, on the seventh day, last evening.

The session was moderated by Co-Founder and Director of Takshashila Institution Nitin Pai and Mysuru Literary Forum and Charitable Trust Chairperson Shubha Sanjay Urs was present.

“India should be an argumentative nation but not a violent one. To be a Super Power, we need to eliminate poverty and every citizen must have access to good healthcare and education. Our economy must be a true success story. More importantly, we must live in harmony within diversity,” he said.

He was cautious to note that world sees India as an under-performer. “We haven’t performed to the full extent of our abilities and there is much to be done. There are many who come and tell me that India must be a Super Power. I disagree with them and conscious effort to be labelled as Super Power. Our economic story must be a true success story by removing poverty,” he said.

“The prestige and respect of India is steadily rising across the world. Our success as a democracy, on our economy, extraordinary human resources, people who have gone abroad have done exceedingly well. There is also the popularity of Yoga, music, Indian writers, food, soft power is also slowly permeating more areas of the world, have all added to our country’s prestige and respect,” he said.

He stressed that we should be an argumentative Indian than a violent one especially in the land of Buddha and Mahatma. An Indian is seen as a tolerant Indian rather than a violent Indian, he added.

Dwelling on right to expression that has been enshrined in the Indian Constitution, the diplomat said that the right safeguards democracy. “India is a great democracy. We have a free press; everything can be criticised. Our Constitution is one of the best in the world. It offers protection to minorities. People can go to court. No one should dilute or snatch away the right to express or speak his/ her opinion. Opinions and views make a democracy more vibrant. Action must be taken on people who burn books and any attempt to curtail freedom of speech must be opposed,” he opined.

The diplomat, during the course of the session, recalled his visits to Mysuru and mentioned the beauty of Brindavan Gardens, Sri Ranganathaswamy Temple that resembles Sri Ananthapadmanabhaswamy Temple in his home town of Thiruvananthapuram.

On COVID-19, Rajamony said that he was a victim of the pandemic as two of his books could not be published.

“The pandemic world over has affected the publishing industry as well as writers. It is important to stand up and support both of them and in my view the Mysuru Literature Festival is doing this by organising the festival and lending support. I would urge citizens to support every literature festival and all aspects of the book industry,” he said.

Revealing how his book ‘What we can learn from Dutch’ which was about water management and to be released in Kerala received a setback as the publishers had faith in the book to do well, he said.

Stressing on the importance of gifting books instead of useless souvenirs, he called upon the people to make gifting books a habit instead of giving flowers and fruits. However, he noted that some people are giving plants, which was much better practice.

Disclosing how difficult it is to become a writer as he himself struggles a lot to write with many corrections and drafts, he said as one of the writers put it, earning a living as a writer is most difficult with the possible exception of wrestling with an alligator.

Author, columnist and diplomat Amish Tripathi will be on the panel ‘Suheldev – Silent Hero of History’ at 7 pm today. Author and columnist Shobha Narayan will moderate the session.