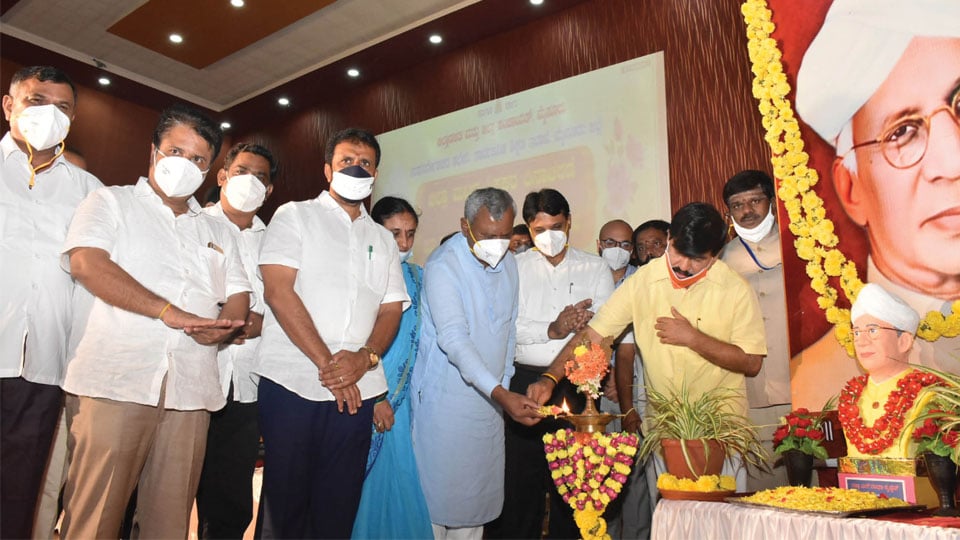 Mysore/Mysuru: Co-Operation and District in- charge Minister S.T. Somashekar inaugurated Teachers’ Day celebration organised jointly by Zilla Panchayat and the Department of Public Instructions at a programme held at Teresian College in city this morning. Teachers’ Day is celebrated to coincide with the birth anniversary of former President Dr. S. Radhakrishnan.

Speaking on the occasion, the Minister remembered the contributions of Dr. Radhakrishnan and called upon the teachers to emulate him. “Teaching profession is very noble as it will carve out the future of students. Education is very important to drive away darkness from society. It was heartening to note that thousands of teachers were imparting education to lakh of students under the ‘Vidyagama’ scheme, a Government of Karnataka scheme which is also called Learning Enhancement Programme, in view of COVID-19 crisis,” he said

Somashekar complimented teachers for successfully conducting of SSLC and PU examination amidst Corona crisis and said they drew the attention of the entire by actively involving in the examination duty and also for carrying out the evaluation of answer scripts. There is a big responsibility on the shoulders of teachers to mould the kids as responsible and useful citizens of the nation. “My big salute to all  teachers for your self-less service to the society,” The  Minister said.

MLC Marithibbegowda compared teachers to Corona Warriors and thanked them for their active participation in ‘Vidyagama’ scheme. The success of this scheme will go to teachers for their active involvement. It has come to his notice that teachers are not allowed in many villages by people fearing COVID-19. The Corona situation is expected to become normal in next two to three months, he added.

He said Karnataka has taken a bold step to implement National Education Policy aimed at overhauling the current education system. By doing it, Karnataka will become the first State in the country to embrace this new policy.

On the occasion, the Minister felicitated a number of teachers in recognition of their services.