Home » News » A society that does not celebrate its artists, writers is soulless 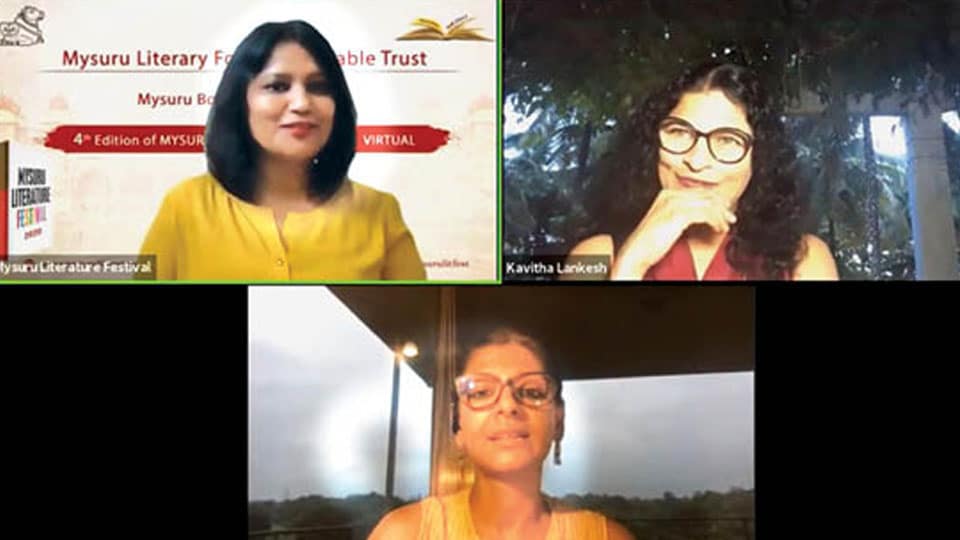 A society that does not celebrate its artists, writers is soulless

Mysore/Mysuru: Critically-acclaimed actress well known for her performances in over 40 films in 25 languages like ‘Fire’, ‘Earth’ and ‘Bawander,’ Nandita Das, is well-known for playing unconventional roles, and for speaking up on issues she strongly feels about.

Speaking in a virtual session on ‘Feisty and Fearless,’ held as part of Mysuru Literature Festival 2020, hosted by Mysuru Literary Forum and Charitable Trust and Mysuru Book Clubs – 2015, on the fifth day last evening, Nandita Das opined that artists have the responsibility to keep the conversation alive on issues in the society.

“A society that does not celebrate its artists, writers is soulless. Art and activism are needed and for me they come together. My art is my activism. My activism is expressed through my films, my writings, my talks and my other choices. I make no distinction between work and life. We create too many straight-jacketed compartments. Conversations must be kept alive for a society to thrive and the role of artists and creative beings is vital here,” she said.

“Yes, over time people’s response to issues has changed, but all problems in the world can be solved through conversation. Such conversations should neither enrage sections nor polarise them. The focus and tone must be inclusive,” Nandita Das opined.

Nandita Das entered Bollywood in 1996 with Deepa Mehta’s film ‘Fire’ with Shabana Azmi, as a co-actor. Along with path-breaking films like ‘Earth’, ‘Fire’ and ‘Bawander’, she had a brief stint in mainstream films in ‘Aks’ with Amitabh Bachchan. Apart from acting, Nandita has done direction and writes her own scripts.

“Acting gave me a rich experience of doing challenging roles with filmmakers like Adoor Gopalakrishnan, Mrinal Sen, Rituparno Ghosh among others. I find filmmaking most fulfilling. When I acted in ‘Fire’, it became controversial, but it also started a conversation about LGBTQ rights. And it was before Article 377 was finally abolished. I wonder if such a film could be made in the present polarised time,” she wondered.

Not to settle scores

She was emphatic that she does not make preachy films to settle scores. Obviously she was referring to ‘Firaq’, her first film that explored the aftermath of the 2002 riots in Gujarat. In the age of 24-hour TV, these riots were more disturbing in their impact. She finally went with a group to Gujarat and spoke to people whose lives were ravaged. Senior journalist Kuldip Nayar persuaded that she come with them.

“Firaq was not meant to polarise but describe the human stories that were affected by violence. I want to engage and not polarise,” she said. Explaining that she lets stories come to her than seize on an issue, Das narrated the long process of research that went into ‘Manto’.

“You need the compulsion to tell a story. Stories never came to ‘Manto’ and he did not go in search of stories. It was challenging to create the Bombay and Lahore of the 40s and more important was to weave in his most celebrated stories into the narrative,” she added.

“You need to go into these stories and come out into his life. We should not underestimate the audience,” she cautioned. The critical success of ‘Manto’ proves that a non-mainstream film can reach hearts and minds. Pakistan censor authorities found that film was critical of partition and so could not be shown there,” she revealed.

On filmmaking, the acclaimed actress said, “Filmmaking often becomes all science and not art. Ideally, it is a partnership between the producer and director — more so now when a filmmaker needs to confront any form of discrimination on the basis of a given identity.

The session on ‘Wafts of Melody’, this evening at 7 will be attended by musician Ustad Amjad Ali Khan and moderated by Roopa Pai. Register at: http://www.mysuruliteraturefestival.com/registration. Watch on YouTube at: https://m.youtube.com/channel/UC5H93tCm_27YSlSmCKTzYBQ?feature=applinks