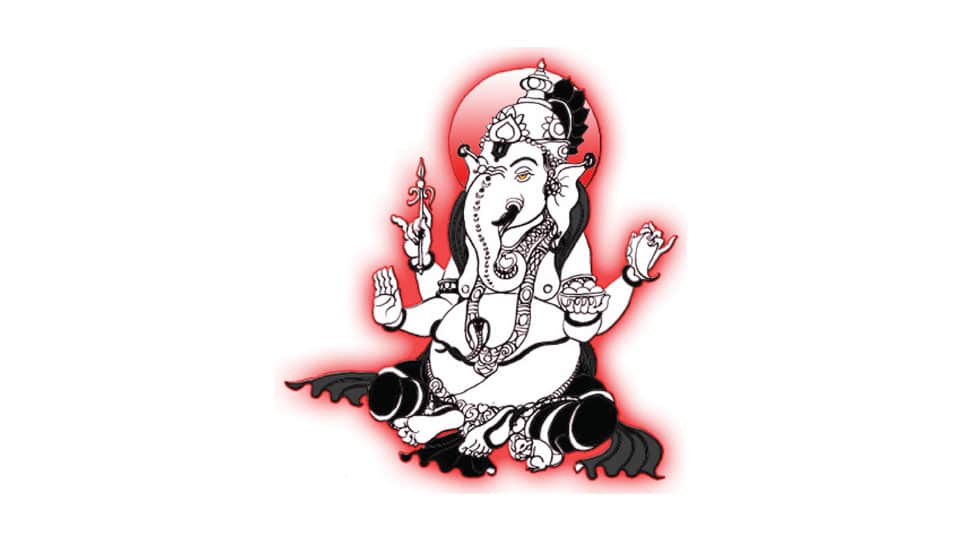 Rainy season is considered an inauspicious time. The sun is making its journey south; the days are becoming shorter and the nights colder; the earth is wet, worms and snakes are wriggling out, the walls are damp, and there is moss in every corner… it is Chaturmaas, the four months when sages don’t travel, stay indoors and tell stories of Gods. As rains start to wane, the earth covers in green, and brings forth her son, the one who will remove all obstacles as the seasons begin their march towards harvest time. That son is Ganesha, Gowri’s Ganesha, seated on her lap, corpulent, elephant-headed, cute and powerful.

Ganesha is Gana-esha, foremost of Shiva’s Ganas. While the rest of the Ganas — creatures known as Yakshas and Pramathas and Bhutas — are fearsome and forbidding with their unusual forms, loved, included and understood only by Shiva, their ascetic-master, Ganesha has been able to delight us all — inspiring artists to create and recreate him in various shapes, each one joyful in mood and awe-inspiring in expanse.

If Shiva has his way, there would have been no Ganesha, no harvests, no obstacles, and no world — just snow-covered desolate peaks where everyone meditates in silence. He is the destroyer — destroying the world through indifference. But Goddess Shakti will have none of it. She wants the ascetic to open his eyes, pay attention and engage with things worldly.

As Kali, she dances naked and as Gowri she prays fervently, forcing Shiva, the hermit, to become her husband, Shankara, the householder. This happens in Shivaratri before the rains, before the passionate nights of summer, in spring, after the winter mists have parted and Holi has been celebrated.

And then, soaked in rain, she asks him to give her a child — for through children is death conquered and continuity assured. But a much-married Shiva does not see the point of children. “Why produce children and accept mortality? Why not renounce the flesh and embrace the immortal soul?” he wonders. The compassionate Goddess explains, “Because life is soul and flesh, stillness and movement. Living is about dealing with dying, about celebrating this realm of cradles and crematoriums, of frustration and excitement, of laughter and tears, of growth, of discovery. It is this tempest of the sea that makes us yearn for the tranquillity of the mountains.”

A son is born

Shiva does not understand. He shuts his eyes and withdraws. Not one to give up, the Goddess collects the rubbings of the turmeric paste she has anointed herself with and moulds herself a doll and places it on a betel leaf — and behold, a son is born, Vinayaka, Vi-nayaka, the one born without a husband. And she loves him and asks him to guard the entrance to her cave. He becomes the Lord of Muladhara Chakra, the base chakra, the guardian who will lead us on that occult journey called Tantra that reveals the mysteries of the Goddess. When Shiva returns to the cave of the Goddess he is surprised to find a doorkeeper, one who does not recognise him and one who he does not recognise.

The Guardian God blocks the path of the ascetic, an obstacle separating God from Goddess. For the first time, the self-contained Shiva experiences rage and restlessness and even a little bit of jealousy. A fight follows in which Vinayaka is beheaded. Shiva experiences momentary triumph followed by guilt when the Goddess wails at the sight of her beheaded son. Sorrow turns to fury and Shakti demands that her son be resurrected, else Gowri will become Kali and spread her tongue and swallow everything in a single gulp.

Shaken, Shiva orders his Ganas to fetch the first beast they encounter in the northern direction. Why northern? North is the direction of resurrection, growth, permanence, as against the south, which according to Vaastu, is the realm of Yama, of Rakshasas, of death, decay and destruction. The Ganas encounter Airavata, the bull-elephant of Indra, the rain God. His head is placed on the severed neck of Vinayaka and the boy is resurrected. This ‘twice-born’ son is named Ganapathi by Shiva, the Lord of the Ganas, and his son.

The arrival of Ganesha made Shiva feel various emotions; without realising it, the indifferent ascetic had grown attached to the Goddess, and was not willing to share her with anyone. By killing and resurrecting the son of Gowri, Shiva had become a father, a member of society, and a true householder. Ganesha thus represents the union of material wisdom (the Goddess) and spiritual ideal (Shiva). His form unites worldly wealth (pot-belly) and divine power (elephant). It enhances wealth generation (serpents) and stops wealth decay (rats).

It is not without meaning that Ganesha’s head is that of Indra’s elephant. Indra is the rain God. The cutting of his elephant’s head marks the end of the rain and the beginning of a great harvest. Incidentally, Indra according to Vaastu is Lord of the East. Thus while travelling north, the Ganas found a creature of the east, making Ganesha the Lord of the north-east, the most auspicious corner of the house, the corner of the Gods, the corner of Ishan, who is Shiva.

Ganesha’s trunk to the left & right

In art, when Shiva is half a woman, the Goddess makes up the left half of his form while he retains the right half. On the left is the heart, of intuition, of feeling. The right side, the opposite side, is the side of the head, of the thinking, of intellect and of the soul. When Ganesha’s trunk points to his heart, he is closer to his mother, the sensual Goddess, who embraces material reality. But when it points to the right, he is closer to his father, the intellectual mendicant who wants to shut his eyes to the world.

Ganesha’s image with trunk pointing to his heart is popular in households because it shows a Ganesha comfortable with the world of matter, senses and emotions. Ganesha with his trunk curled to his right, is more ascetic in nature, hence not kept inside homes, and preferably enshrined in temples; the most famous of these is Mumbai’s Siddhi Vinayak. The two tusks of Ganesha represent aggressive masculinity; this is tempered by breaking one of the tusks, to write the story of man — the Itihasa called Mahabharata, a story of passion, of human weaknesses. All this shows a compassion and consideration for imperfect man.

In Ganesha’s hand is a Modaka which is essentially a sweet mixture packed in a conical pack made using steamed flour. It looks like a bag of money. Its roots are in ancient statues of Yakshas, especially of their king Kubera, who holds such money purses and is the guardian of treasures. Ganesha has many other Gana or Yaksha characteristics. He has the pot belly, very much like the Laughing Buddha. It is the symbol of prosperity. The snake wrapped around it protects the prosperity and ensures its renewal, much as the snake renews its skin at regular interval. Ganesha’s rat may be depicted in films as a cute mouse but it is a bandicoot, a fearsome pest that is impossible to control. It symbolises the problems of our lives that only Ganesha, Lord of the threshold, the remover of obstacles, can keep out.

Symbol of sensuality and sensory control

When a bull elephant is in heat during mating season, it sheds a fluid from its temples; this is called Mada in Sanskrit meaning the fluid of sensory intoxication from which comes the word Madan or the God of love and Madira, the Hindustani word for wine. This makes the elephant the symbol of sensuality. In folklore it is said, that when an elephant stays celibate, the retained semen transforms into a jewel that sprouts from its head. It is the symbol of Siddha, power earned through sensory control. Ganesha’s head thus is both the symbol of sensuality and sensory control because one is not sure, if Ganesha is married or single.

In Maharashtra, he is said to have two wives: Riddhi and Siddhi, Goddesses of material and intellectual growth. Scholars have traced these two wives to Kubera, the king of Yakshas, once again reconfirming that Ganesha has his roots in these ancient fertility Gods.

Thus various symbols, with potent metaphysical themes, telescope into the form and narrative that is Ganesha. They speak a profound truth in a language that bypasses the rational mind and connects intuitively with the soul. It is this silent language that we — a generation bombarded with unsubtle ‘Breaking News’ — are longing perhaps to hear.

That is why we are so drawn to him, going to the extent of turning him into celluloid cartoons and plastic China-made dashboard displays. And Ganesha does not mind, so long as we appreciate the realm of his mother, and aspire for the realm of his father.