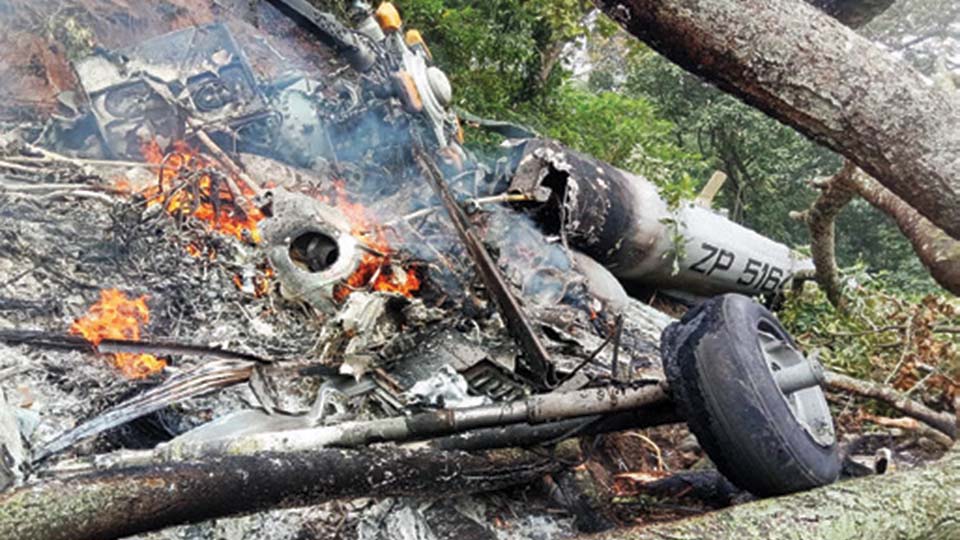 General Rawat’s wife Madhulika Rawat was killed. The crash took place shortly after the Russian-made Mi-17 V5 chopper took off from the Air Force base in Sulur, Coimbatore, for Wellington in the Nilgiri Hills.

The helicopter was already making its descent and would have landed in 10 more minutes. It came down around 10 km from the nearest road, forcing emergency workers to trek to the accident site. Reports of the crash emerged around 12.20 pm.

Videos showed wreckage scattered on a hillside and rescuers struggling through thick smoke and fire to locate bodies. Charred bodies were pulled out by locals and cops from under mangled metal and fallen trees.

General Rawat, 63, took charge as India’s first Chief of Defence Staff in January 2019. The position was set up with the aim of integrating the three services – the Army, the Navy and the Air Force. Many former army chiefs expressed grief; they described the Mi-17 double engine chopper as a very stable aircraft used for VVIP flights.

Visuals from the site showed massive flames and locals helping with the immediate rescue operations. Official sources said all the injured people on board the Mi-17V5 helicopter have been evacuated from the spot of the accident. The Chief of Defence Staff was on his way to the Defence Staff College in Wellington.

The helicopter, carrying a few senior officials, was on its way from Sulur in Coimbatore to DSC in Wellington where Rawat, along with Chief of Army Staff M.M. Naravane was slated to participate in an event later, the sources added. The chopper crashed in the forest area, reportedly due to poor visibility following heavy fog, they added.

The IAF said. “Gen Bipin Rawat, CDS was on a visit to Defence Services Staff College, Wellington (Nilgiri Hills) to address the faculty and student officers of the Staff Course today,” it said. The last rites of General Rawat will be performed in New Delhi. PM Narendra Modi chaired the Cabinet Committee on Security (CCS) meeting at 6.30 pm in the wake of the Coonoor helicopter tragedy.

Paying rich tributes to Chief of Defence Staff Gen Bipin Rawat, Prime Minister Narendra Modi said on Wednesday that he was an outstanding soldier and a true patriot who greatly contributed to modernising India’s armed forces and security apparatus. Gen Rawat’s passing away has saddened him deeply, the prime minister said.

In his condolence message, Modi said he was deeply anguished by the helicopter crash in which Rawat, his wife and other personnel of the armed forces died. They served India with utmost diligence, Modi said, adding that his thoughts are with the bereaved families.