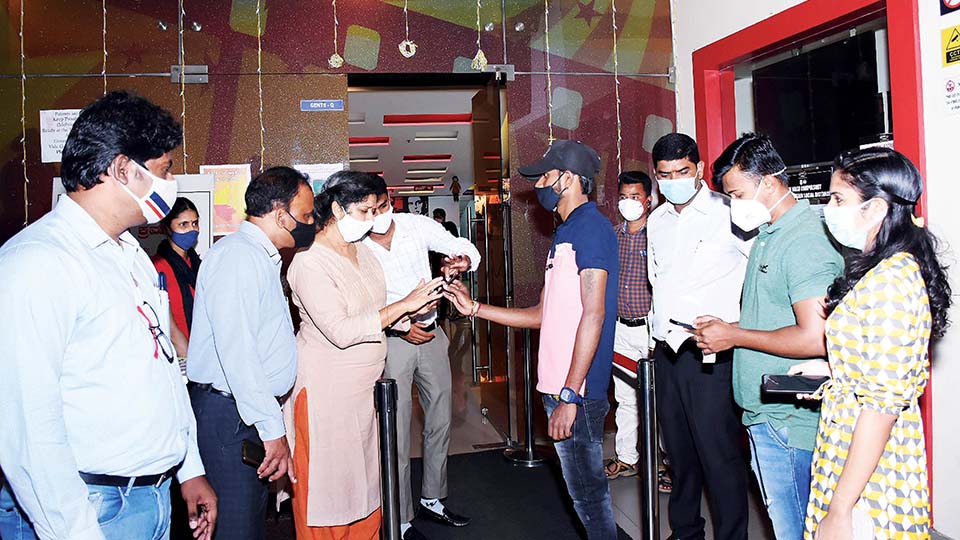 Keep your masks on; MCC checking squads are here

Mysuru;  With the second wave of the pandemic petering out, instances of people being fined for not wearing masks have considerably decreased and this gave the people an impression that COVID-19 has gone away. But with the threat of third wave and the more contagious Omicron variant, the Mysuru City Corporation (MCC) has reintroduced checking squads to ensure full compliance of the face mask rule.

If one is caught without wearing masks, a fine of Rs. 250 is levied in city areas while Rs. 100 is being collected beyond the city limits.

The MCC teams will coordinate with the Police to enforce the mask rule. First it will be awareness and next will be fine.

“We have reintroduced checking squads and they have started doing the rounds in places where the density of the population is high. We are also concentrating on people who have gathered in front of tea shops and bakeries as chances of the virus being spread from there are more,” said MCC’s senior Health Officer Dr. D.G. Nagaraj.

“Instances of penalisation had come down because in the last two months there was a lot of improvement in the COVID situation. We have decided to reintroduce the penal action as people have become complacent and are repeatedly ignoring the warnings,” he added.

Teams have been formed in all the nine zones of the MCC and we are pursuing the issue with renewed seriousness and intensity, he added.

The State Government has made two doses of vaccination mandatory for those who want to visit malls, shopping complexes and cinema halls.

READ ALSO  COVID Vaccine Fest to be held once a week, says Minister

Accordingly, the MCC has directed owners and managers of commercial establishments to assign staff to screen and verify the vaccination certificates of all customers and ensure only those double vaccinated are allowed to enter the premises.

As per the MCC order, customers and staffers have to wear a mask and follow social-distancing norms at all times. Teams and health officials are undertaking surprise visits to malls, theatres, supermarkets and other commercial establishments to check violations and if any violation is spotted, action is being initiated under the Disaster Management Act, 2005, and other relevant legal provisions, Dr. Nagaraj said.

Meanwhile, the Omicron variant, believed to be highly transmissive, has got people rushing to the mobile vaccination units launched by the MCC, Health Department and the District Administration.

After Dasara, despite vaccines being abundantly available, there were limited numbers at centres as the fear of the infection had eased. However, with the new variant and the resultant restrictions coming into place, demand for vaccines has gone up.

“Ever since the Omicron variant has surfaced, there has been a steady increase in people coming to vaccination centres and mobile units. Prior to this, despite efforts made by the administration, the turnout was low. However, in the past two to three days, the demand for vaccines, both first and second doses, has gone up,” Health Officers told Star of Mysore.