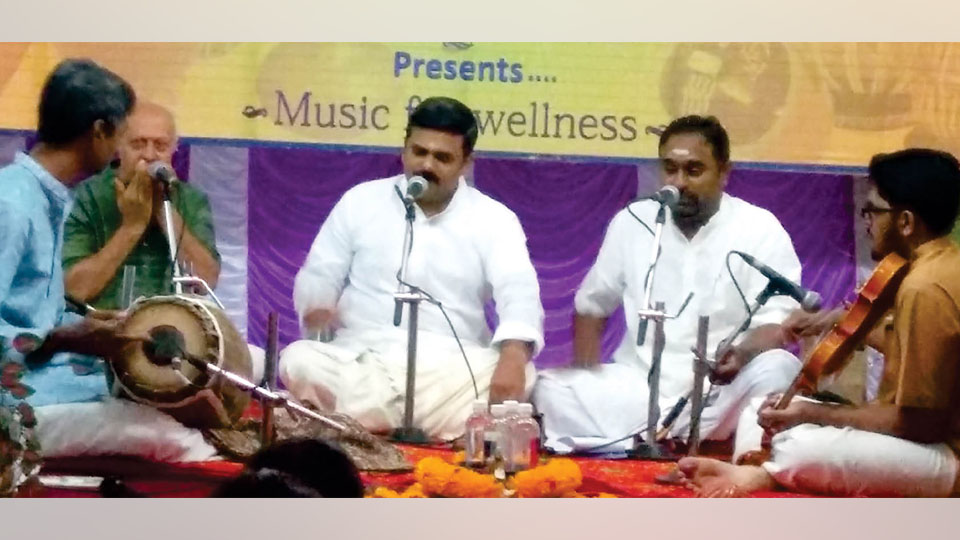 RAAGA Music Academy, Mysuru, which is just four years old, ranks among the leading Sabhas in city. With its perceived objectives of upholding the traditional values in Karnatak music, RAAGA encourages young and budding artistes by providing a platform for them at their auditorium in Kuvempunagar.

With its beautiful  ambience and a chamber like atmosphere, music reverberates 3rd Saturday of every month in this place which is rightly   called “Melody.”

Thus, the 21st of July witnessed an excellent vocal duet performance by young Vidwans Dr. Harish Narayan and Sivaram Arunchalam, both from Chennai. The duo are disciples of  the senior most Vidwan in city, T.P. Vaidyanathan, who has groomed and moulded their music in the last more than 20 years.

A rarely heard Attatala varnam of Patnam Subramani Iyer in Poornachandrika sung in three speeds, gave a bright start to the evening’s concert. Next followed one of Thyagarajas thematic  kritis, ‘Shobhillu Sapthaswara’ in Jaganmohini and the brisk and short Neraval and Kalpana swaras at “Dhara Ruk-saamaadulalo” proved a forerunner to what was to follow.

Muthuswami Dikshitar’s ‘Ekamresa Nayike’ in Karnataka Shuddhasaveri was sedate and soft on the ears. This was followed by the sub-main piece in Kedaragowla. Harish Narayan developed  the raga beautifully, concluded by Sivaram Arunachalam though with a weak voice here and there. The krithi ‘Venugana Loluni’ of Sri Thyagaraja was well-sung and the Neraval and Kalpanaswaras at ‘Vikasita Pankaja — vadanulu’ showed the duo’s grip over their music.

‘Sarasamukhi’ in Gowdamalhar, both raga and kriti composed by Harikeshanallur Muthiah Bhagavatar preceded the main piece of the evening, RTP in raga Saveri.

After an elaborate and well-developed raga and tana in a leisurely way, they took up the Pallavi as if to thank the Gods for the bountiful rains in Karnataka this year. The pallavi ‘Cauveri Ranganai Ninai, Saveri Raga Priya’ (in Tamil) was very appropriate, which they presented in Trikala with Neraval, Kalpanaswara, Koraippu and a fine and simple Muktaya.

Young Keshava on violin, a new find by RAAGA, also claimed the attention of the listeners with his soft and melodious accompaniment. Vid. Radhesh on mridanga and  Vid. Ramesh on morching who gave excellent percussion support did a thrilling ‘Thani’ after the RTP. It was heartening to note that the duo’s performance was marked by a compactness with a good coordination, free of any gimmicks and at the same time, maintaining classicism.