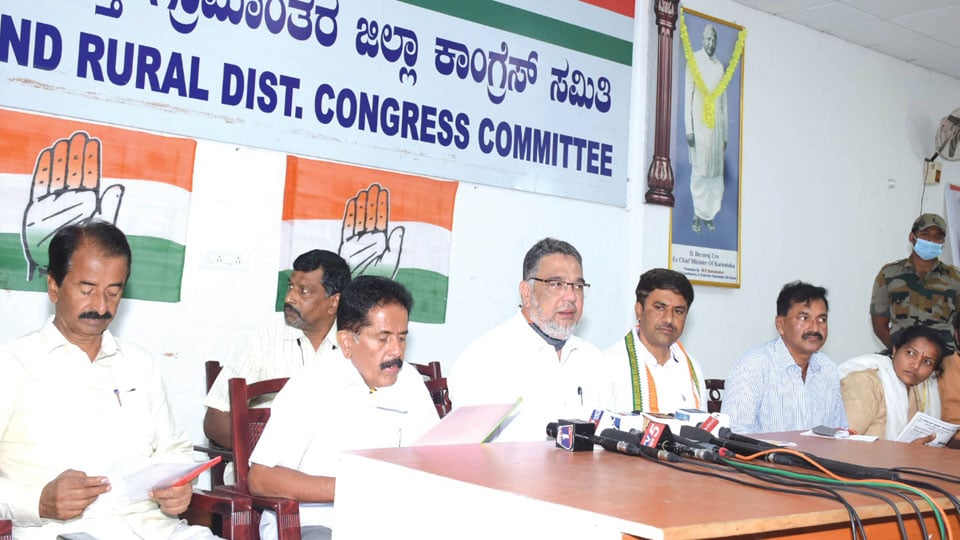 Mysore/Mysuru: Accusing BJP MP Pratap Simha of inciting communal hatred over the issue of evacuating   unauthorised places of worship constructed at public spaces, city Congress leaders maintained that the evacuation is being undertaken by the District Administration following a Supreme Court order.

Addressing a press meet at Congress Bhavan here on Thursday, NR MLA Tanveer Sait said that the evacuation is going on as per a Supreme Court order of 2013 and those in a responsible position should know what to speak about and when.

Alleging that Pratap Simha has been issuing statements on the evacuation of a place of worship on D. Devaraj Urs Road that can incite communal feelings, he charged the MP of misleading people and engaging in vote bank politics.

Maintaining that the MP had ‘directed’ the Deputy Commissioner on the evacuation issue at the KDP Meeting chaired by the District Minister at the ZP Hall on Wednesday, Sait asserted that the issue of evacuation of a memorial on D. Devaraj Urs Road is now in the Supreme Court and that the MP must not make irresponsible and insensitive statements that disturbs peace and harmony in the society.

He also said that the MP as an elected representative, should stand up for the safety and security of citizens and not incite them against each other by raising communal issues and spreading hatred.

Former MLA Vasu said that the Supreme Court has ordered evacuation of unauthorised places of worship at public places and the District Administration is carrying out evacuation based on the order.

Taking strong exemption to the remarks of MP Pratap Simha, he said that no one is above the law and the MP should understand this and behave in a responsible manner.

Another former MLA M.K. Somashekar said that the MP should first read the 2013 SC order before issuing any statements on evacuation. Contending that the BJP must feel ashamed for the attitude of its MP, he alleged that the MP was issuing statements that are communal in nature, rather than discussing burning problems and developmental issues at meetings.

Questioning  the Centre’s National Monetisation Plan (NMP), he alleged that the Centre was out to sell profit making Government establishments to a few corporates, under the pretext of leasing them out.