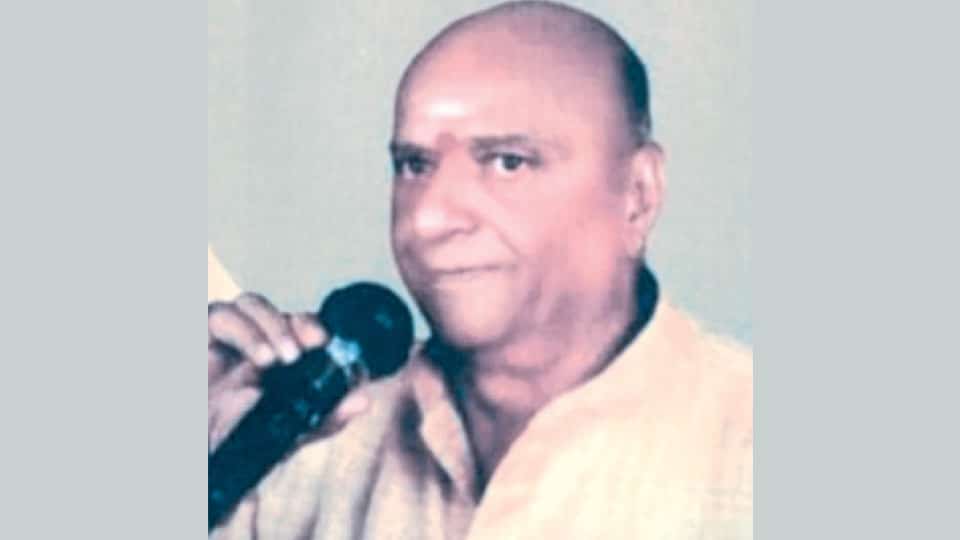 Mysore/Mysuru: City’s renowned announcer and campaigner N. Chandrashekar (71), passed away yesterday night at Ranebennur, following a heart attack. Popularly known as ‘Mike Chandru,’ he leaves behind his wife Sulochana and a host of relatives and friends.

A resident of J.P. Nagar here, Chandru had gone to Ranebennur to meet his ailing sister where he collapsed in the bathroom last night. Though he was being rushed to a hospital, he breathed his last mid way.

His body was brought to his residence in city this morning, where it was kept for the public to pay their last respects. Last rites were performed at the foot of Chamundi Hill this afternoon.

It may be recalled that the Department of Posts, Mysuru Division, had released a Special Cover on ‘Town Crier’ Mike Chandru in the year 2018 recognising his unique skill in the profession of announcement for various cultural, sports and political events.

A native of T. Narasipur, Chandru was a popular mike announcer for over five decades and was sought after by many programme organisers, irrespective of cultural events, musical nites, orchestra or even political rallies.

He was proficient in several languages like Kannada, English, Hindi, Tamil, Telugu and Malayalam. He was a regular announcer at Dasara exhibition and had served many orchestra troupes.

Chandru began his journey as a theatre artiste and had worked with several troupes such as Amara Kala Sangha, Kalapriya and Samudaya to name a few. He had even acted with famous actor late Hirannaiah in his popular play ‘Lanchavathara.’

During elections, he started creating awareness on compulsory voting in villages that had even attracted the attention of BBC, which even interviewed him.