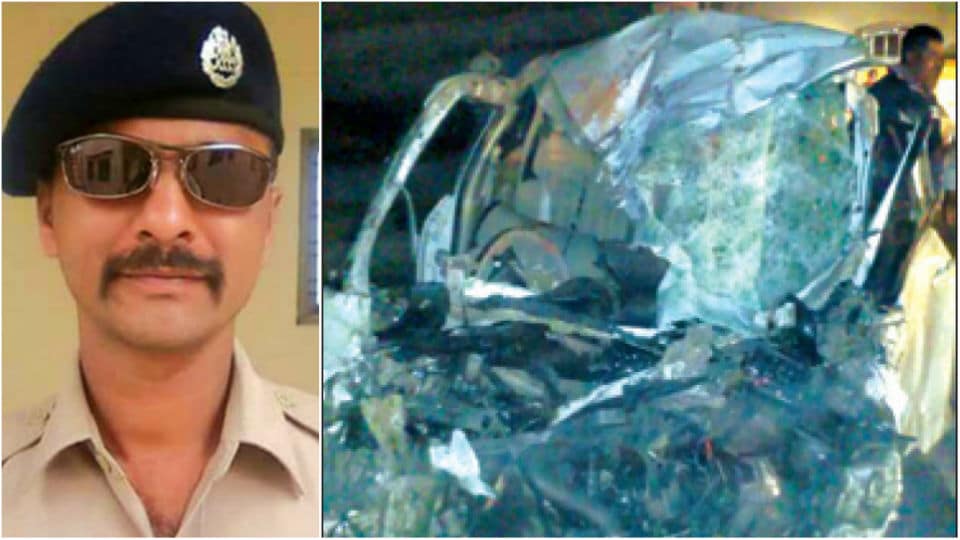 Lokayukta SP S. Ravikumar and his driver Kirankumar were killed in a demonic accident that occurred near Ramohalli village on Bengaluru-Mysuru Highway in Bengaluru Rural district yesterday evening.

While Ravikumar (34) succumbed to injuries while being taken to Rajarajeshwari Hospital on the highway, his car driver Kirankumar (33) died on the spot.

It is reported that the accident occurred when a Bangaluru-bound tipper went out of control, crashed into the median, over turned and landed on the Maruti Swift Dzire (KA-01 G-5856) in which Ravikumar and Kirankumar were returning to Mysuru.

It is learnt that Ravikumar had left for Bengaluru on Tuesday to take part in a meeting at the office of Lokayukta ADGP Dr. Parashivamurthy.

Kumbalagodu Police, who have registered a case, are on the lookout for the absconding tipper driver.

A native of Sasalu village near Doddaballapur, Ravikumar, a 2008 batch KSPS Officer, had assumed charge as Mysuru Lokayukta SP 16 months ago  after serving as ACP in Amruthahalli Sub-Division in Bengaluru and Panambur Sub-Division in Mangaluru.

Kirankumar, a native of Arakalgud in Hassan district, attached to the City Armed Reserve, was working as the official driver of Ravikumar.

Ravikumar, who married four years ago, had recently celebrated the naming ceremony of his daughter in a grand manner.