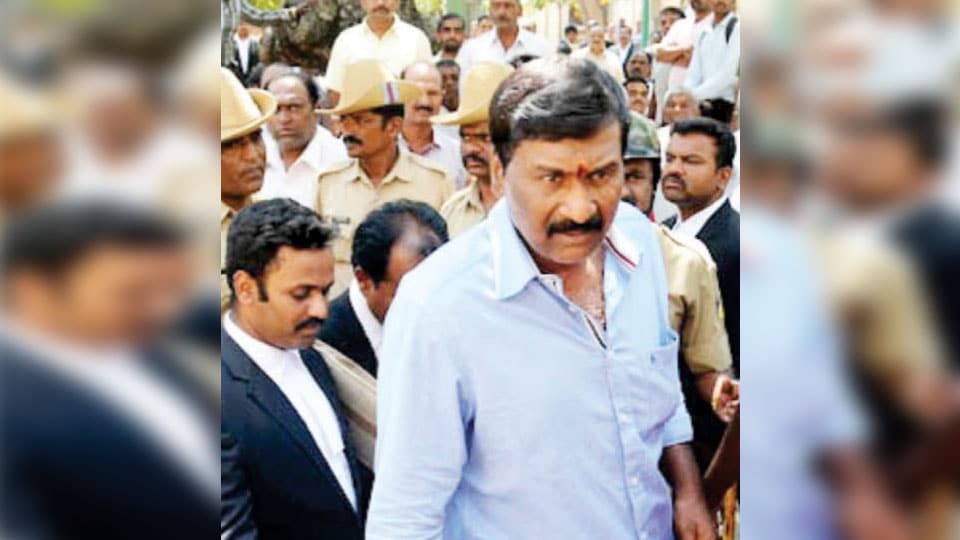 A fresh case has been slapped against history-sheeter brothers C. Mahadesh alias Avva Madesha and his brother C. Manjunath alias Manja, who have been sentenced to life imprisonment in the sensational double murder case in Hunsur. The latest case was booked against them for abusing and behaving inappropriately with Police Officers inside a Court.

Yesterday, the brothers were produced before the Principal District and Sessions Court in connection with the murder of history-sheeter Devendra alias Devu at Paduvarahalli on May 5, 2016. After producing them before the Judge, the Police were escorting them back when their (Madesha and Manjunath) followers and supporters surrounded to speak to them.

At this point, Lakshmipuram Police Inspector Siddaraju and his team, who were looking after security measures inside the Court, intervened and asked Madesha and Manjunath not to interact with their supporters as they were under judicial custody. The Inspector and his team prevented the crowd, numbering over 100, from meeting the brothers. Enraged by this, Madesha and Manjunath abused the Inspector with foul language.

Both brothers face charges under the provisions of Karnataka Control of Organised Crimes Act (KCOCA) 2000. According to the Police, Madesha and Manjunath spoke inappropriately to the Officers on duty when they were not allowed to talk to their supporters.

As the brothers were abusing the Police Officers, their supporters too ganged up and started hurling abuses. Soon, Madesha, a former JD(S) Corporator, and Manjunath were escorted back to the Police vehicle. The Police had to resort to mild lathi-charge to disperse the crowd.

Based on the directions from senior Police Officers, Lakshmipuram Inspector Siddaraju has lodged a complaint and cases have been booked against Madesha, Manjunath and their supporters under IPC Sections 504 (Intentional insult with intent to provoke breach of the peace) and 353 (Assault or criminal force to deter public servant from discharge of his duty).

The Police have videographed the entire incident and Officers said that the accused have been lodged in jail and a body warrant of the accused will be sought after three days to investigate the latest case. Madesha and Manjunath were among 15 inmates brought from Chamarajanagar, Ballari and Dharwad jails to Mysuru yesterday for hearing.