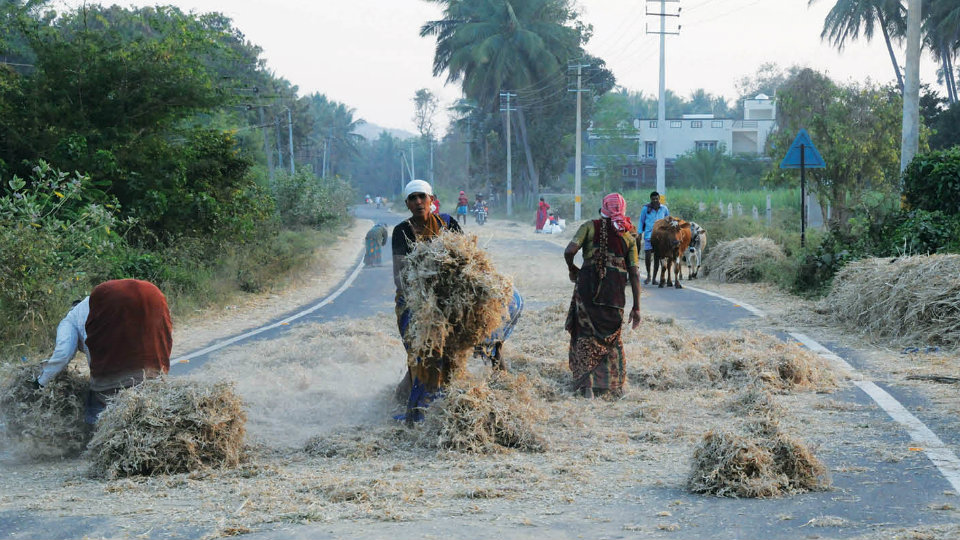 Mysuru: Come harvest time, road travellers in many parts of Mysuru do their bit and add the final touches to the farmers’ calendar of agricultural operations by running their buses, lorries, cars and bikes on harvested crops spread out on roads to be threshed.

While some are taken by surprise, others ponder appreciatively on the resourcefulness of farmers. Most, however, are dismayed at having to slow down and negotiate the piles of grain stalks stretching ahead of them.

Threshing is the process of loosening the edible part of grain (or other crop) from the husks and straw to which it is attached. It is the step in grain preparation after reaping and before winnowing, which separates the grain from the chaff. Threshing does not, however, remove the bran from the grain.

However, the tradition of threshing paddy, horse gram, jowar and ragi crops on roads to separate the crop from sheaves has caused much inconvenience to drivers (at times accidents) on roads and highways. As the vehicles pass the roads laid with crops, they skid and due to dust they can’t see vehicles that are moving ahead, resulting in accidents.

Farmers spread straws on roads, forcing vehicles to flatten them. In some places, farmers heap straws on the roadside, too, forcing drivers to inch their vehicles forward. Very often, straw gets entangled with the wheels of the vehicles, sometimes causing them to slip off the road. Motorcyclists face this danger most of the times. There are instances where the straws have caught fire due to the friction between the vehicle tyre and the asphalted road.

But farmers argue that this is the best way to remove the crop from the stalks. “Earlier, we used to get a lot of labourers to do the work and crops were carried to the threshing yards where they would be beaten to wooden logs to separate the crop from the stalk. Later, the winnowing process would be taken up. Now due to severe shortage of labourers, we are forced to do this on asphalted roads,” said Narayanappa, a farmer who had spread out his horse gram crop on  Bandipur-Mangala Road.

Every harvest season, Narayanappa works on the roads along with his family. While he and his 21-year-old son Shankara spreads out the horse gram crop on the roads, his daughter and wife collect and separate the chaff from the grain. Once the process is complete, the crop is filled into gunny bags and taken for the market to sell.

It may be recalled here that last year, following a series of accidents due to paddy threshing on roads, Mysuru Police had warned farmers not to use the roads for farming activity.