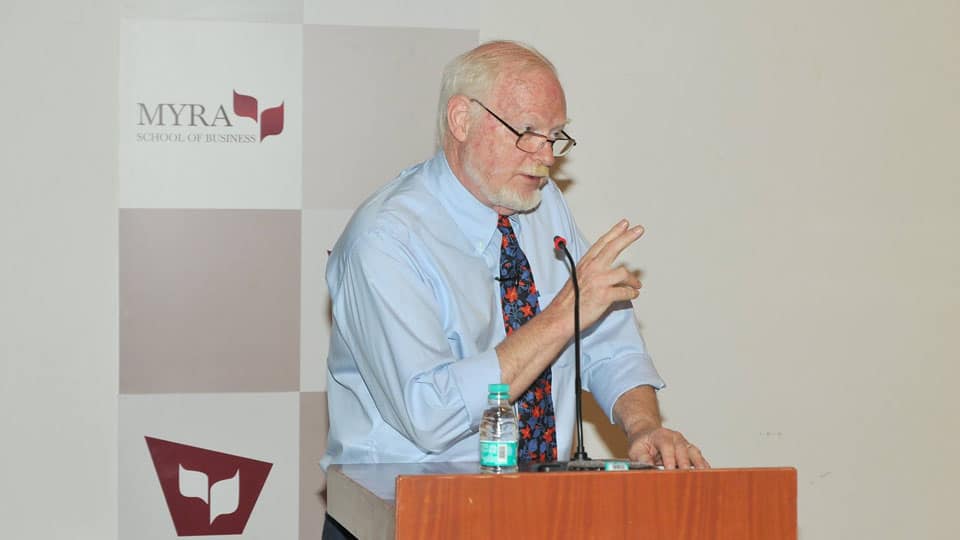 Dr. James Manor knows more about Mysuru and Karnataka than most of the local residents. An erudite scholar who has published over ten books on development and governance, Dr. Manor has closely studied Mysore State in the pre-independence era and has also observed the progress of Karnataka in a democratic India.

In his address, Dr. Manor traced the progressive policies of Mysore State starting from the times of Maharaja Krishnaraja Wadiyar. He was emphatic that the progress the State has shown today is largely due to D. Devaraj Urs who had the vision, right ideas and political acumen to empower the downtrodden communities and to strengthen the institutions, towering over caste-based political adversaries.

Known as a social reformer, Devaraja Urs introduced reservation for backward classes and stood as a champion for poor and downtrodden. He even included poor Vokkaligas to the backward class. His aim was to provide progressive redistributive pro-poor policy, Dr. Manor explained.

“Devaraj Urs made several key changes that brought not only relief, but also restored a sense of dignity to the people of Karnataka cutting across religions and caste. He gave a voice to the oppressed and he was the very few politicians who addressed the pressing question of social justice,” Dr. Manor opined.

He pioneered private participation in engineering and medical education which later led to IT boom in Bengaluru. He created caste-based groups for progress and became a master of political chess game. He introduced land reform acts and curbed excessive implementation of Indira Gandhi’s emergency practices, he said.

“Nurturing the Government as a progressive and constructive force, the late CM enabled equitable distribution of wealth through land reforms and reservations, and helped the backward and oppressed classes get into mainstream economy. He was also an astute political leader, and he could win against powerful caste-based communities by leveraging smaller OBC communities,” he said.

Dr. James Manor’s depth and width of understanding of Indian politics, democracy and development was on full display when he answered questions from participants. He revealed that a larger-than-life picture of Devaraj Urs adorns his office at London.