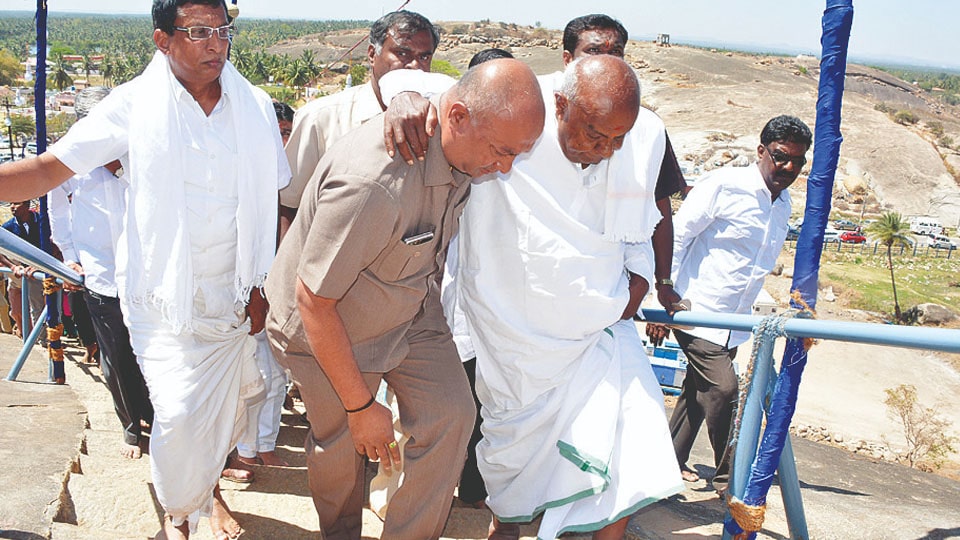 Deve Gowda gets zero, must quit

When will Sri H.D.  Deve Gowda realise that people are fed up with his politics?  His own followers are fed up. Many have quit and joined the BJP, including the President of the JD(S) Karnataka unit, A.H. Vishwanath.  In last week’s by-elections, 15 seats were at stake. The BJP got 12 and Congress 2. One seat went to an independent, leaving Deve Gowda’s party with a big 0.

Not that this was a principle-based ideology-based election.  In fact the very reason for the election was the mass resignation of Congress-JD(S) MLAs for the usual reasons. We don’t know how many BJP crores rolled in the process.  What we know is that the BJP described all the resigned MLAs as “future Ministers.” With money calling from one side and power from the other, BJP partisans rode to victory.  We might think that it will be difficult for the ruling party to give Minister positions as promised to all defector-turned-winners. But our democracy is so elastic that it will be no problem unveiling a 70-member or 100-member Cabinet.

As a Vokkaliga, Deve Gowda was supposed to garner easily the votes of this important and numerically significant community.  But 60 percent of Vokkaligas were found to have voted for the BJP earlier. This would have been on the basis of one bargain or another, a game the party in power can play with good effect.  Nevertheless, voters’ rejection of JD(S) this time shows that Deve Gowda’s selfish politics has reached a point of no return.

One reason is that he has nothing to offer. He imagines that he has an aura.  This is the consequence of that accident of circumstance that put him in the Prime Minister’s chair once upon a time.  He could not stay there even for one year. Yet those fluke ten months gave him a Prime Minister fixation that was both comic and dangerous.  He was convinced that the country wanted to be led by not only him but also his sons, grandsons and                   even daughter-in-law. Unfortunately, his appa-makkala vision did not give him the mileage Indira Gandhi got with her amma-makkala business.

According to the principles laid down by our ancient sastras, Deve Gowda has reached the age that qualifies him to enjoy the peace of vanaprastha.  At 86, he is ten years older than Yeddiyurappa, 15 years older than Congressman Siddharamaiah and nine years older than Congress leader Mallikarjun Kharge. He is not in the prime of health either, although he has been anxious to prove that he is: Last year he climbed the 400 steps to  Shravanabelagola temple, just because the much younger Siddharamaiah had ventured up those steps a week earlier. He had also arranged for television cameras to broadcast his performance of yoga on his bed. These brave feats would not cut a day from his age or negate the health problems he faced such as blood pressure fluctuations and chronic diabetes.  He looks older than he is and more tired that he should be.

With both the Congress and the JD(S) fielding candidates in a Constituency, the BJP gained because anti-BJP votes were split.  The negative record of Yediyurappa (the only party boss in the State who was put in jail for corruption) was overcome by the absence of a credible alternative. Yediyurappa has got a boost with the latest BJP victory, but it is known that the BJP high command has started looking for an alternative. Whether the Congress will have the imagination to cash in on the BJP’s dilemma is unsure. Even if it has the imagination, will it have the personnel?  The Siddharamaiah leadership has formally resigned in shame. A credible younger line of leaders has not been in sight.

A sensible way forward would be for the zero-winner JD(S) to wind up and let a two-party system emerge.  But, of course, this will not happen because Deve Gowda’s ego will not allow it. Which means that the State of Karnataka will have no opportunity to replicate the kind of miracle that has given Maharashtra a new lease of life; incompatibles like the Congress and the Shiv Sena came together because there was a sharp tactician like Sharad Pawar making the moves.