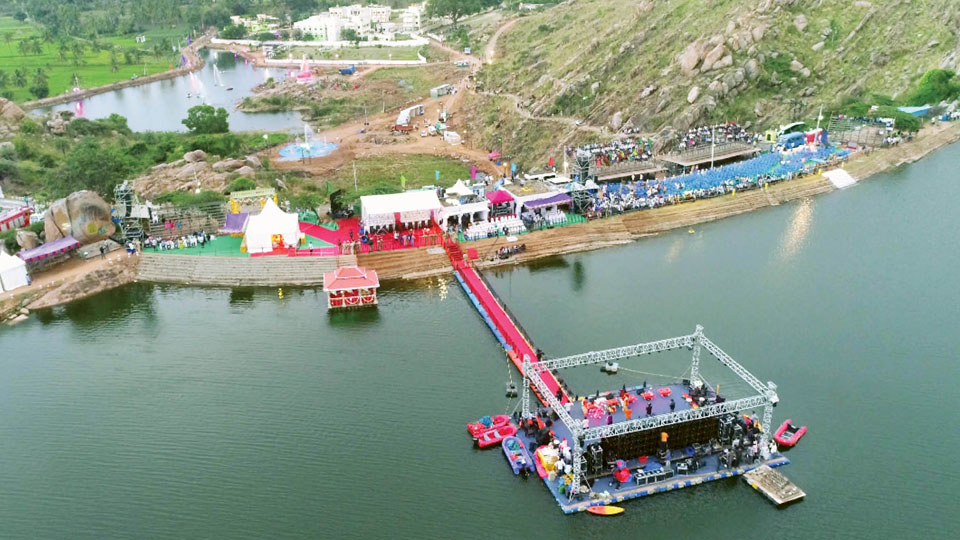 Scenic Thonnur Lake to be developed as Tourist Spot

With the scenic Thonnur Lake at Kere Thonnur village in Pandavapura taluk filled up to the brim, MLA C.S. Puttaraju offered bagina to the Lake recently.

Speaking on the occasion, Puttaraju said that the Lake, formed ages ago in 11th century, was providing water for about 850 acres of land. The MLA assured to develop the Lake fully.

He recalled that during the three-day Thonnur Lake Festival held in November last year, the then Chief Minister H.D. Kumaraswamy had assured to develop the Lake as an attractive tourist spot and had also released a fund of Rs. 10 crore.

For the first time, the Lake festival was organised on a huge floating platform, specially made by a Mumbai firm, right in the middle of the Lake. The platform had seating capacity for about 500 people to stage cultural programmes at the historical spot in Pandavapura.

He said that Sri Ramanujacharya had stayed at the place and developed the area too. He disclosed that it is proposed to provide a hanging bridge between the two hillocks on the banks of the Lake and added that a boating pond on the lines of the one in Brindavan Gardens at Krishna Raja Sagar (KRS) would also be formed.

Significance of the place

From Srirangapatna, a 20-km drive takes one to Pandavapura (which has a hillock that was said to be a favourite of the Pandava matriarch Kunti and hence the name Kunti Betta) to Kere Thonnur, an ancient place with many stories as well.

The blue aqueous beauty, Thonnur Lake is nestled in picturesque environs. The Lake area encompasses the Tipu Caves, the Padmagiri hillock with its turtle rock that is much sought after by rock climbers, and Ramanuja Gange, a small waterfall.

The Lake, a vast expanse of water, it is believed, was designed and built as a gorge between rocky hills, under the guidance of Sri Ramanujacharya who named it Tirumala Sagara.

The Lake, it is claimed, has medicinal properties and that its water has never dried up since its creation, even in severe drought conditions. According to records, when Tipu Sultan visited the Lake, he saw pebbles through its clear waters, and named the lake Moti Talab, or the Lake of Pearls.

One of the legends even gives it a different name — Kere Thondanur or simply, Thondanur, which was a provincial capital of the royal Hoysalas. This story goes that Kere Thonnur was once ruled by a King called Bitti Devaraya. When his daughter fell ill and no one could heal her, the King — a staunch Jain — sought the help of some Vaishnava scholars who had come visiting.

It is said that Ramanuja, one of the visiting scholars, healed her by merely looking at her. The grateful king is believed to have become a follower of Vishnu from that moment onwards.