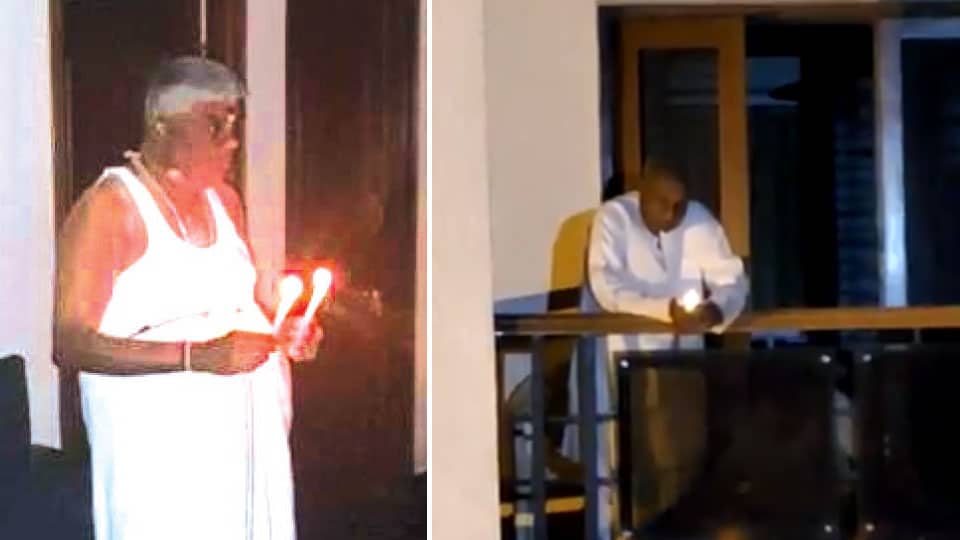 Bengaluru: In Karnataka, Governor Vajubhai Vala, Chief Minister B.S. Yediyurappa, his Cabinet Ministers and lakhs of the ruling BJP’s cadres joined the people in lighting the lamps. “Vala lit the lamp at 9 pm on the roof terrace of Raj Bhavan,” said a communiqué from the Governor’s office.

“It is again resolved that we are one and will fight against corona together,” he said.

JD(S) Supremo and former Prime Minister H.D. Deve Gowda also switched off lights, lit lamps and stood for 9 minutes at the balcony of his residence here.

“Gowda has promised to cooperate with the Government in fighting the virus when Modi spoke to him earlier in the day from Delhi,” a party spokesman said.

Deve Gowda’s second son, who is known to be a firm believer in astrology, H.D. Revanna, responded to Modi’s call and had posted a photo holding two candles.

Ironically, his third son and former Chief Minister H.D. Kumaraswamy slammed Modi for indulging in theatrics and making the people light lamps when they were facing hardship due to the lockdown.

“Has the PM slyly asked the nation to observe a candle light vigil on the eve of Foundation Day of BJP? April 6 being its Foundation Day, what else can explain the choice of date and time for this event? I challenge the PM to offer a credible scientific and rational explanation,” he tweeted.