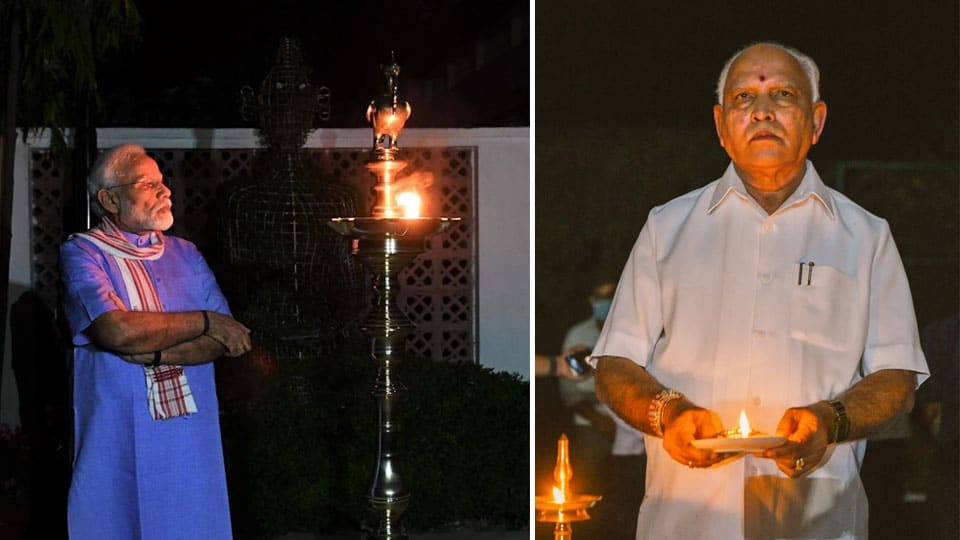 New Delhi: Crores of Indians across the country including Mysuru, Karnataka’s cultural capital, switched off lights at their homes and lit candles and diyas or turned on mobile phone torches last night, responding to Prime Minister Narendra Modi’s appeal to show the nation’s “collective resolve and solidarity” in its fight against Coronavirus with this symbolic gesture.

Switching of the lights in their houses people stood up to PM’s call for unity. Interestingly, people rose above their political inclination to respond to Modi’s appeal.

Much before the designated time of 9 pm, people turned off lights at their homes while lamps and candles lit up the streets as people stood in their balconies and at entrance doors in unison. Fireworks, sounds from beating of thalis, conches, whistles and Police sirens were also heard.

At many places the air resonated with the sounds of devotional songs, mantras and national anthem, in scenes similar to the ones seen across the country on Mar.22 when Modi had sought to rally Indians by asking them to come out briefly at 5 pm to show gratitude to health and other essential service providers.

Modi, who had on Friday urged people to turn off lights at their homes for nine minutes at 9 pm to display the country’s collective resolve and solidarity to defeat the virus, posted on Twitter his own pictures of lighting lamp. People continued to stay outside while maintaining social distancing much beyond the nine minutes.

Earlier in the evening, scores of people were seen uploading pictures of preparations with diyas and candles to observe the nine minutes. People said that the atmosphere all around gave them a feeling like ‘Deepavali’ with the sounds of crackers and the vibrant lights of diyas.

Many were even seen dressed up in ethnic wear in the balconies holding on to the trays of diyas, while many people in some areas were seen holding their cell phones with the torches on facing towards the sky. Many people also sounded the conch and played mantras in their portable speakers and phones while the lights were turned off inside their homes.