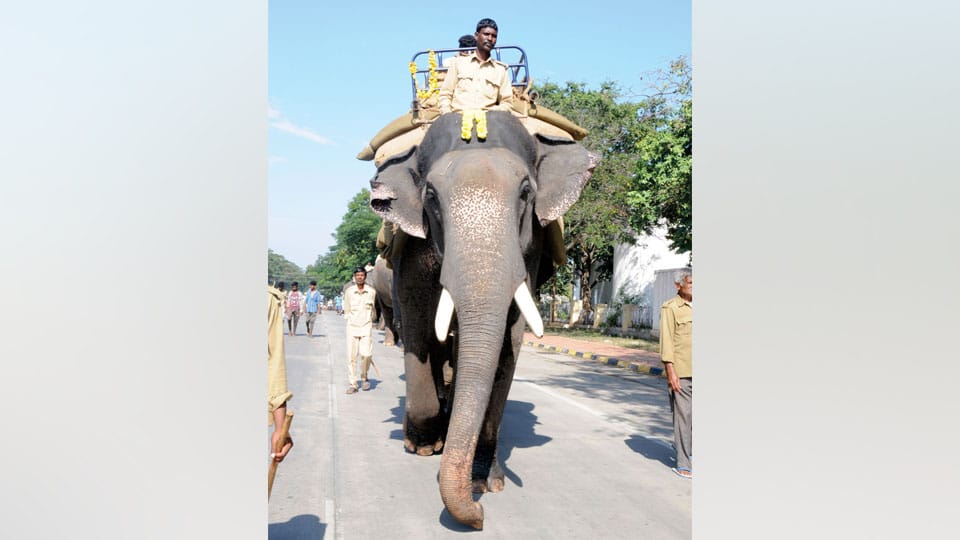 Dhananjaya, who is touted to be the next Howdah Elephant, took it all in its stride and without any hesitation, fear or confusion marched from the Palace to Bannimantap Grounds. It reached the Grounds along with other elephants in 75 minutes.

Speaking to Star of Mysore Deputy Conservator of Forests (Wildlife) Sidaramappa Chalkapure, said that Dhananjaya looked like a competent elephant as he cooperated when the weights were placed on him. He can be groomed for bigger roles in the future, he added.

Meanwhile, for the first time this Dasara season, all the 12 elephants marched in line as part of the walking practice. Since the last one week, it was just the six elephants, led by Ambari elephant Arjuna, who were involved in the practice. During the practice march, people on the route were happy to see all the 12 elephants walking in line. Many were seen offering fruits and jaggery to the elephants and even folding hands in reverence.

The second batch of Dasara elephants led by Balarama, which arrived at the Mysore Palace yesterday were all weighed this morning at Sairam Lorry Weighing Service Centre on Dhanavanthri Road.