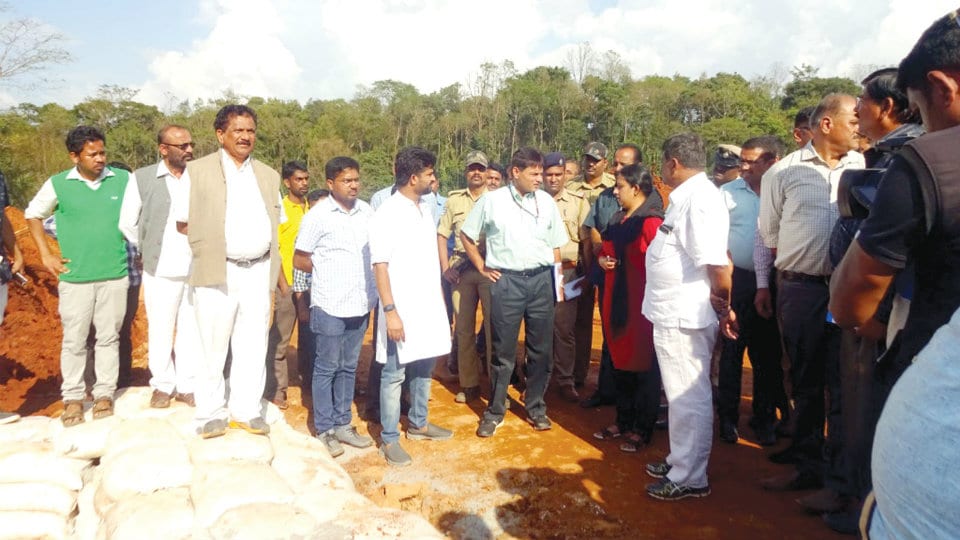 Madikeri: A Central team of the Union Government visited a few rain-affected villages in Kodagu district on Wednesday and Thursday and gathered information about the damages occurred due to the natural calamity last month.

After the first day’s inspection on Wednesday, the team held a meeting with district officials at Harangi Inspection Bungalow near Kushalnagar.

Sreevidya said that a primary survey has been conducted on rain related damages and an estimate has been prepared for compensatory measures.

Pointing out that the survey of the entire district would take at least 15 more days, the DC said that the ongoing survey is being conducted by 100 teams, comprising the staff of various Governmental Department.

The team was apprised about collapsed hills, destruction of roads, damaged houses, coffee estates and loss of paddy, pepper, orange, cardamom and other crops. Details were also provided  on inundated residential layouts, caving in of Madikeri-Mangaluru National Highway and other State Highways.

During inspection, the team instructed the survey officers under them to take note of property loss as per National Disaster Response Force (NDRF)guidelines.

MP Pratap Simha and Virajpet MLA K.G. Bopaiah requested for a change in NDRF guidelines, which at present offers compensation for only two hectares of land, irrespective of how many acres of land a farmer or owner has lost.

The Central team was accompanied by district officials from various State Government Departments including Agriculture and PWD, who have submitted their preliminary survey reports.

The team based on these reports and their own first-hand survey of the devastation, will brief the State Chief Secretary and later submit a full report to the Union Government.

ONE COMMENT ON THIS POST To “Kodagu survey: Central team to brief State Chief Secretary on damages”