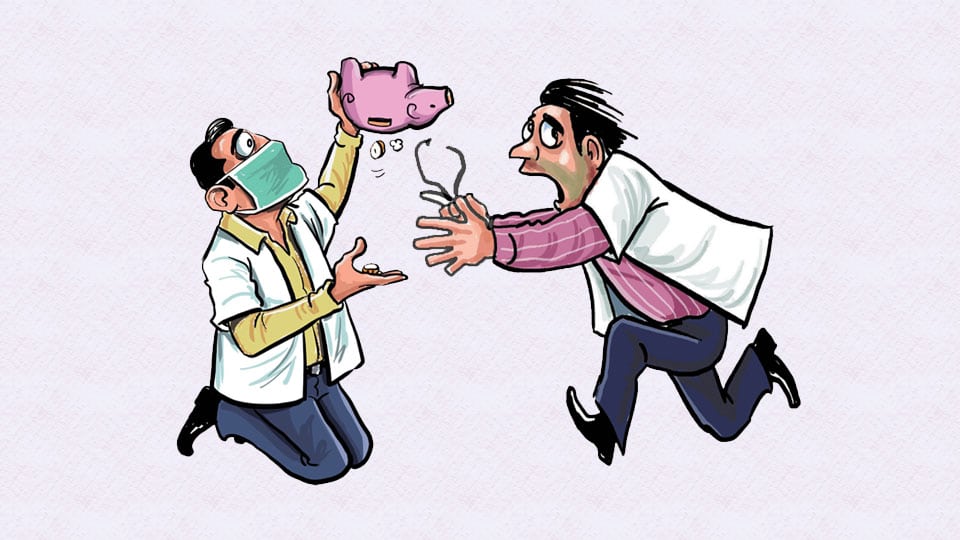 Two days ago on July 1, we observed the National Doctors’ Day. The Prime Minister wished the doctors and thanked them. But more than thanks the doctors need something else — protection.

Indeed, the Government has done the needful by introducing and passing “The Epidemic Diseases (Amendment) Bill, 2020,” which makes acts of violence on health workers treating Covid-19 patients a non-bailable offence with provisions for a hefty fine and a jail term of up to seven years.

Nineteen States have passed the Medical Protection Act (MPA). Under this Act, offenders can get a jail term of up to three years and a fine of Rs. 50,000.

It may sound very protective, but in reality it is not. Because this Act neither features in the Indian Penal Code (IPC) nor in the Criminal Procedure Code (CrPC).

What does this mean? Well, this means that when a doctor is beaten up and he or she rushes to the Police Station to file a complaint, the Police will not know under what Section of the IPC or CrPC to book the offender!

My advice to doctors, along with your stethoscope and ID card, please carry a copy of this Bill at all times to show the Police.

Interestingly, the name of this Act could give even the disease with the longest and the most challenging name to pronounce — Pneumonoultramicroscopicsilicovolcanokoniosis (pronounced Nyoo•muh•noh•uhl•truh•mai•kruh•skaw•puhk•si•luh•koh•vawl•kay•noh•koh•nuh•oh•suhs) — a type of lung disease — a run for its money.

Doctors have long been demanding that a Central Law be put in place instead of a State-wise MPA. But health matters,  which includes protection of doctors,  is a “State subject” — meaning only States have the power to frame and pass laws related to it. And States do not want to give it up as politicians like to control Hospitals and the doctors.

In fact, when the much-needed “Epidemic Diseases (Amendment) Bill, 2020” to protect doctors treating Covid patients was tabled in Rajya Sabha, Derek O’Brien of the Trinamool Congress charged the Union Government of interfering in the functioning of States through the Bill. He said, “There are sinister provisions in the Bill. The States must be authorised to take decisions.”

But the question is, when the “Pre-Conception and Pre-Natal Diagnostic Techniques (PCPNDT) Act, 1994 — making prenatal sex determination illegal” can be a Central Law — why not MPA?

While we thank our doctors on Doctors Day, can we give them the gift of real protection from political goondas and violent relatives of patients?

Now that said, the President of India Ram Nath Kovind said, “We are deeply indebted to these selfless angels who have risked their lives to save ours.” But today not all doctors are angels and over the years there are fewer doctors we can trust or revere.

If one is a discerning newspaper reader, one would have noticed in Mysuru in the last year-and-a-half, there have been three big financial scams, from stock trading to solar scam. In all the three scams, the biggest investors were doctors! And most of them invested in cash !

Interestingly, one Star of Mysore reader called our office and demanded that we publish the names of the investors in these scams because it was a matter of his health! I said explain.

This is what he said, “I have a relative in the Police Department who told me that in all the three scams, it was mostly doctors who lost money, two of them happened to be my doctors. You must publish all these doctors’ names, because I fear these doctors now will unnecessarily write tests we don’t need and prescribe medicines we should not take so they can make up their loss. You must do it, it’s public service.”

I told him we can only publish names of people who have filed a complaint and most people in these scams had paid in cash. All the same, I felt he had a point.

Empathy and kindness are very important traits to be a “true” doctor, only then will one think of the patient’s “suffering.” For that to happen, doctors may need to be administered more than just Hippocratic Oath.

This reminds me of a very harsh suggestion made by Dr. Robert Rudolph at the University of Pennsylvania School of Medicine in USA. According to him, the best way to produce a good, sympathetic and humane doctor is to make it mandatory for student-doctors or residents to become patients!

He says, “I believe every doctor should have a Nasogastric tube inserted once or twice and undergo a thorough Barium Enema. Perhaps, even be made to spend a night or two confined to a Hospital bed, plugged into an intravenous drip and then be subjected to harried and uncaring staff doctors and nurses while bed-ridden. I’ll bet this trenchant exercise will produce far more empathetic, sympathetic and good doctors than multiple lectures on sensitivity and humanism by some medical academic, ethics professor, or member of the cloth. I dare say that I truly believe that my experiences of being a patient as a student sure as hell helped mould me into the caring and sensitive practitioner I am today!”

There is no doubt that medical profession has serious probity issues. But then if you give doctors targets, then they are doctors no more, they become salesmen.

Now, the worry is not how many doctors are indulging in commission and ‘cut practice’ but the perception, credibility and trust. If one can’t trust their doctors, then whom do we trust — in God?  Or another doctor?

Is that why more and more patients are going for second and even third opinions, apart from Google consultation? All this just to make sure their doctor is not cheating them?

According to Dr. Kamal Kumar Mahawar, author of The Ethical Doctor, it is estimated that some 39 million families are pushed into poverty every year in India, simply as a result of mounting healthcare expenses incurred. Doctors’ commissions account for a significant proportion of that cost and the trust deficit further escalates costs as patients go for second and third opinions.

Corruption seems to have crept in aggressively in two professions that people have given an exalted status — Healthcare and Journalism. One is revered as next to God, the other as the Fourth Pillar of Democracy. Guess in the end, conscience is the only system of self-regulation — some have it always, some lose it on the way, but then one can always grow it back.