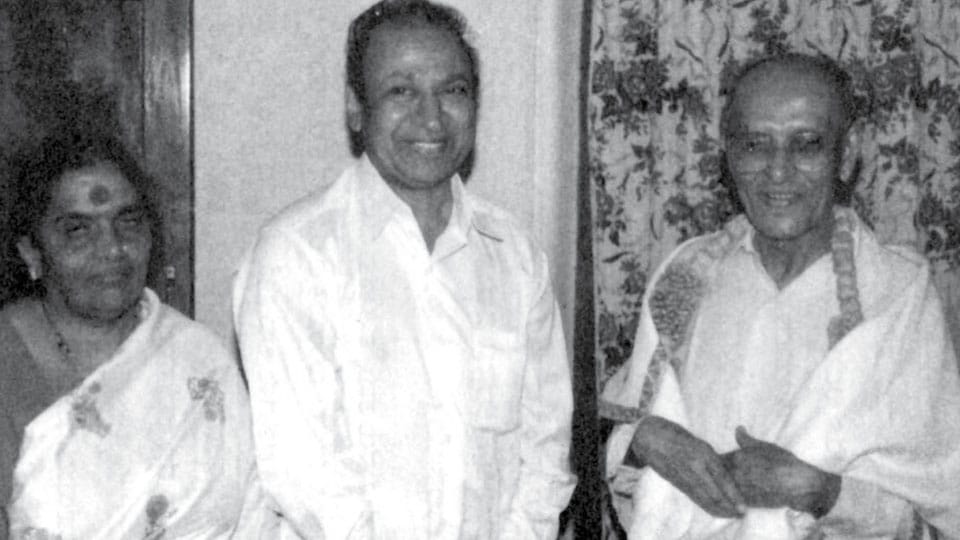 Dr. H.S. Krishnaswamy Iyengar: A master chronicler of our times

An ace biographer, columnist, critic, poet, master essayist, novelist and editor of many works —  H. S. Krishnaswamy Iyengar (HSK) was a gentle giant in the realm of literature and journalism. Always wearing a warm and endearing smile, this affable and humble soul chronicled the life and times of personalities, both at home and abroad in his columns over several decades. His columns were always beautifully laid out, packed with an astonishing amount of information and yet remarkably devoid of any bias or prejudice. This is a small homage to our former columnist whose very last article appeared in SOM almost twelve years back. —Ed

H.S. Krishnaswamy Iyengar or HSK as he was popularly known, was born on 26th August, 1920 in the village of Haleyuru near the picturesque locale of Chunchanakatte in K.R. Nagar taluk of Mysore. His parents were Haleyuru Srinivasa Iyengar and Alamelamma, a devout and traditional couple. His father was a teacher at the local school. HSK had his schooling in Siddapura School at Kempegowda Koppal before moving to Dalavayi and Banumaiah high schools in Mysore. During these formative years, HSK imbibed from his father a taste for books. His voracious reading introduced him to the works of Galaganatha, Masti, Kuvempu and Rajaratnam. He took an active interest in founding the ‘Kannada Sangha’ at K.R. Nagar during these years.

Once, Dewan Sir Mirza Ismail happened to visit Haleyuru, where he had been invited to distribute some prizes at a local event. Among the drove of journalists who had amassed there stood a young boy who caught the Dewan’s attention. The Dewan was further impressed by the fact that this young chap was the official reporter for ‘Tayinadu’ and thus began conversing at length with him. He was so taken aback by the witty conversation that ensued forth, that he invited young HSK to accompany him in his State car for the remainder of his rural sojourn !

In a long line of professions graced by Krishnaswamy Iyengar, journalism was to be the first of many. He also reported for ‘The Hindu’ during these years. Incidentally, before he became a reporter for these big news houses, young HSK began his tryst with the world of journalism by actually distributing newspapers for a living — something he used to remember with a great deal of cherish in his later years. His first desk job was as an accountant at a Silk filature distribution agency. His second salaried tenure was on the editorial board of ‘Mysore Commerce’ magazine.

HSK completed his Intermediate at Mysore. He moved to Bangalore in 1940 whence he started his L. Com education at Central College. This was completed in 1943. Impressive scores during these three years earned him a scholarship of sorts where he was given free boarding and lodging at Ramakrishna Student Home. During these years, he had his first brush with titans of Kannada literature like B.M. Srikantaiah, Rajaratnam and D.V. Gundappa. He passed the Kannada Sahitya Parishat’s “Kannada Jana” exam with flying colours and received the prize personally from B.M. Srikantaiah.  HSK completed his Bachelor’s degree in Commerce in 1948. He was by now contributing with increasing regularity to newspapers like “Deshabandhu”, “Vishwa Karnataka” and “Chaya.”

His first foray into the world of teaching was as a high school teacher at National High School, Bangalore. This was followed by a brief tenure at T.R. Shamanna’s ‘Ranganatha Institute of Commerce’ where he was a member of their faculty. Around this time, B.V. Banumaiah was in the throes of starting a new college at Mysore and invited HSK to be a member of the new faculty. HSK began teaching at Banumaiah’s College in 1949. By 1951, he had earned a Master’s degree in Economics from Benaras Hindu University. Armed with a Master’s degree, HSK rose swiftly through the ranks of Associate Professor, Professor and eventually became the Principal of the Institution. He spent nearly two decades at Banumaiah’s College before a regrettable difference of opinion urged him to resign from the job in 1969.

READ ALSO  Lest we forget their sacrifice-3: The story of Field Marshal K.M. Cariappa

With no job in hand and precious little coming his way in terms of financial remuneration, he had a daunting period ahead of him. Fortunately, Prof. D. Javaregowda (Dejagow) at the behest of Ha.Ma. Nayak and Vice-Chancellor Srimali invited him to University of Mysore to grace the post of Editor of Humanities division of ‘Kannada Encyclopedia’ project. He did exemplary work here and was instrumental in grooming many a young talent. From 1970 – 80, he was additionally Editor-in-Chief of University of Mysore’s “Manavika Karnataka” magazine. For a brief period he taught “Indian Cultural Studies” in the post-graduate and diploma studies wing in the University before retiring in the year 1980.

HSK’s writings span six decades. They are voluminous and cover a wide range of topics. His first columns came about in Kannada Sahitya Parishat’s “Kannada Nudi” newspaper. His subsequent columns were written for newspapers and weekly periodicals like “Prajavani”, “Sudha”, “Samyuktha Karnataka”, “Taranga”, “Star of Mysore” and “Mysooru Mithra.” His “Varada Vyakthi” column where a prominent person was featured every week, ran for nearly two decades in the weekly Kannada periodical “Sudha”. The number of character sketches here total to about 1,167! Personalities featured here included the likes of Tennis star John McEnroe, anti-apartheid leader Nelson Mandela, Economist and Nobel Laureate Amartya Sen, historians like Dr. S. Srikanta Sastri, thespians like Dr. Rajkumar, Theologians like Shankara, Ramanuja and Madhavacharya, Sanskritists like Mathoor Krishnamurthy, Politicians like Jayprakash Narayan and Indira Gandhi, writers like Kuvempu, Bendre and Ta.Ra.Su. and artists like Raja Ravi Varma, a Picasso among others. These were later collected into four big volumes — “Belaku Chellida Baduku” (306 sketches), “Manyaru Samanyaru” (299 character sketches), “Gaganachukki Barachukki” (562 sketches) and lastly “Minchu Gonchalu.” By any stretch of the imagination, this is a prolific output for one individual and yet this was to be the tip of the proverbial ice-berg as far as his literary output was concerned.