Home » Feature Articles » HSK: A master chronicler of our times 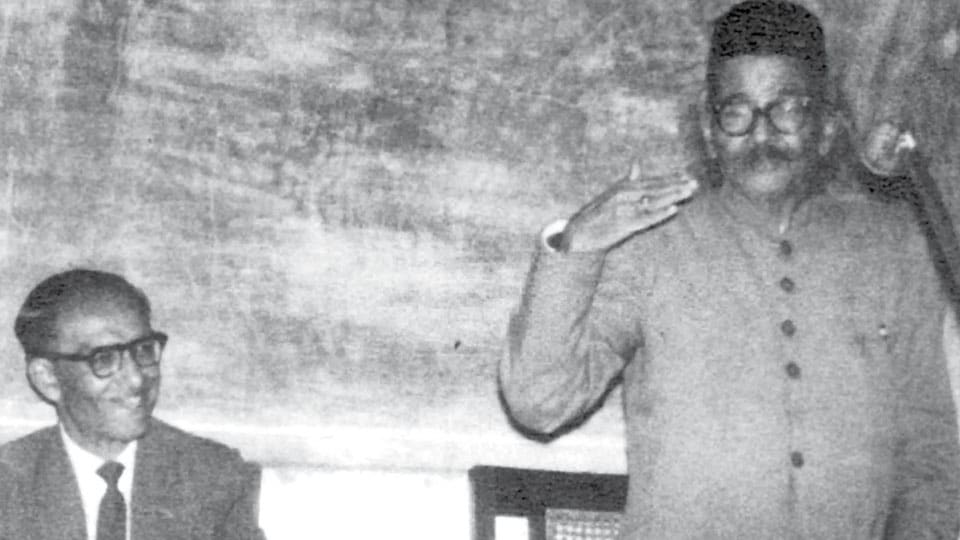 HSK: A master chronicler of our times

HSK’s repertoire was vast and seemingly endless. He seemed to transcend boundaries of different genres of writing with effortless ease. While he was an ace biographer and chronicler of his times, he was also a master essayist, critic, poet, editor and novelist of considerable repute. His five collections of essays bear testament to this. His three novels “Mukti Marga”, “Bayakeye bele” and “Kurukshetra” showcase his narrative skills beautifully. His two collections of short stories “Aa Chitra” and “Muppina Sangathi” were very well received in literary circles. His work “Kannadadalli Vidambana Sahitya” received the Karnataka Sahitya Parishat Award in 1981. His literary perspective on Kuvempu’s writings wherein he saw glimpses of ‘Vishistadvaita’ were indeed novel for his time — this he beautifully encapsulated in “Kuvempu Sahityadalli Vishistadvaita Darshana.”

HSK’s creative streak gleamed forth in his two anthologies of poems titled “Davanada Kone” (1989) and “Tingalurina Tere” (2001). He did not limit his writing to the literary realm. His socio-political views would come forth in his works on economy and linguistics. To name a few are “Namma Abhivruddhi Yojanegalu” (on Five Year plans) and “Vanijyashastra Parichaya” (an introductory book on Economics for students) among others. An eternal proponent of Kannada language, he argued for Kannada being our lingua franca (especially in administrative circles) in his book “Vyavaharika Kannada.” HSK authored about five books in English which were mostly biographies of Bendre, Shivaram Karanth and Masti among others.

Probably D.L. Narasimhachar described HSK’s writing the best when he said thus (translated from Kannada): “Iyengar’s writings embody the use of a simple language, a healthy absence of unnecessary adjectives, a beautiful structuring of sentences, content that is devoid of any ambiguity in its import, highly relatable illustrations, examples drawn from everyday life and most importantly a measured yet generous style of expression — an eclectic mix of qualities that one wishes for in every writer.”   HSK himself described his style of writing in the words of Somerset Maugham as being a “Style-less style.”

His reputation as an extremely sober and balanced writer gained him access to places and people, which were otherwise off limits. He had the rare distinction of being one of the chief participants of a meeting of the “Yojana” Committee chaired by the then PM Jawaharlal Nehru. Also to his credit was the fact that the media shy Kuvempu had agreed to be interviewed by none other than HSK.

Sri Jayachamaraja Wadiyar was interviewed by very few people in his time and HSK was one among this select club. HSK’s last written piece titled “Modern Malls: Turning a new leaf” was published four days after his demise in this very newspaper on Tuesday, 2nd September, 2008 as he used to send the Friday columns — HSK’s moving finger writes… — one week in advance. His penultimate article  “National politics at the crossroads” was published on Friday, 29th August, 2008.

H.S. Krishnaswamy Iyengar passed away at the age of 88 years on the night of 29th August, 2008 due to ill health.

HSK married Champalakshmi in July 1945. They had two children — Parthasarathy and Geetha. Champalakshmi in HSK’s own words deserves a great deal of praise and gratitude, for it was her ‘patience,’ unending ‘love and dedication’ which saw the family through times both difficult and happy. It was she who comforted and offered succour to HSK when he came home after resigning from his vocation of twenty years at Banumaiah’s College — a time when the family literally had no other means of income! Fifty- four-years of married life made Champalakshmi HSK’s most endearing and trusted companion. Sadly, she passed away on November 4,1999.

READ ALSO  Lest we forget their sacrifice-3: The story of Field Marshal K.M. Cariappa

An anecdotal experience often remembered with regard to HSK goes something like this — a young chap who had just then cleared his IAS exams came rushing into the chambers of ‘Sudha’ magazine one day and exclaimed that he was the first person to have cleared the exam having written it in Kannada! A tall claim indeed, but not an unexpected one. But what was to follow this made it a more memorable incident. He added, that for his exam preparation, he seldom ever visited a library or a book store — instead all he apparently did was diligently read HSK’s weekly columns which covered just about everything under the sun! Such was HSK’s sweep.

HSK often remarked that through those years of highs and lows, if there was one thing that held him and his family in good stead, then that was ‘writing’! He referred to ‘writing’ as the raison d’être of his existence and it most certainly was. The one redeeming quality that set HSK apart had to be that his writing was always factual, devoid of bias and never tinged with any particular ideology or view point. The gentleness and warm sentiment, that this man espoused so effortlessly through his wonderful smile and sense of bearing made him all the more affable and endearing to his legion of readers.

This giant of a writer was denied a pension for all of his retirement years and had to struggle to make ends meet! If a society is to be judged based on how it treats its intellectual gems, then it is high time we introspect into the current state of our society and polity and wonder where we are headed to?