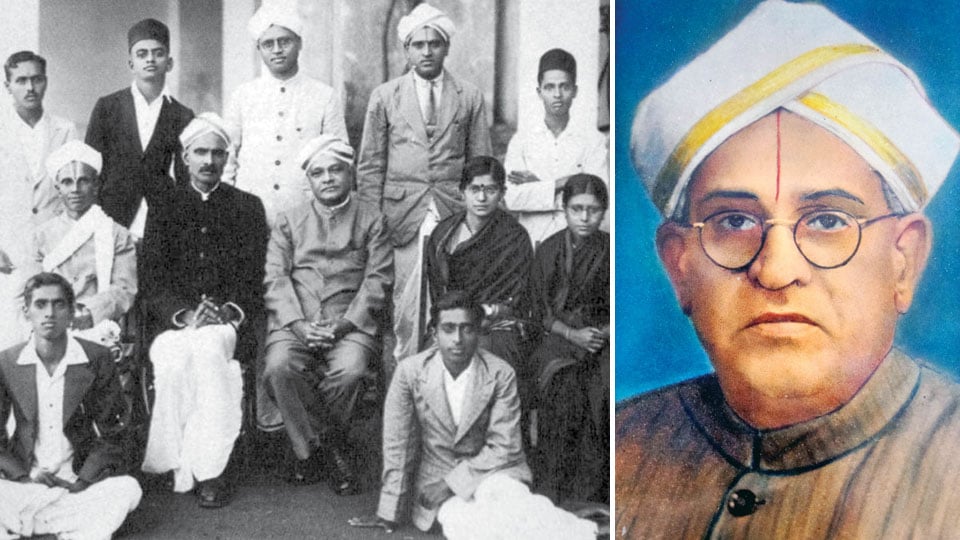 He was an ace linguist, grammarian, lexicographer, editor of numerous volumes, epigraphist and literary critic. He roughly churned out 80 research articles in 40 years in both Kannada and English. Always seen in a close collared coat and dhoti, he was humility personified. The Government of Mysore conferred on him the Kannada Rajyotsava Award. And in recognition of his Lifetime to the world of Kannada Studies, the University of Mysore bestowed on him an Honorary D. Litt in 1969. He is D. L. Narasimhachar, the epitome of scholarship.

Doddabele Lakshmi Narasimhachar was born on 27th October 1906 in Chikkanayakanahalli, Tumkur district. His father Shamayya Iyengar was a clerk in the Sub-Registrar’s Office. His mother Lakshmamma was daughter of Annaswamy Iyengar, known for his rendition of Mahabharata (Bharathavachana). D.L. Narasimhachar (DLN) spent most of his childhood at Annaswamy Iyengar’s house and he had mastered “Jaimini Bharatha” by the age of 12 ! His family had migrated from Salem during the Vijayanagar Empire’s reign.

Narasimhachar had his schooling at Pavagada, then at Madhugiri and Sira. He learnt Sanskrit through private tuition. While in school, he was an avid contributor to the school magazine “School Folk” which was started by Principal Krishnaswamy Iyer. His earliest articles were an English article titled “The Story of a Cotton Seed” and a Kannada article titled “Dodda Manushyaru Yaaru?” In his school years, he had read works of Raghuvamsa and Champunarayana. During these school years, B.M. Srikantaiah once paid a visit to DLN’s school and took a class on “Stories from Aeneid.” This class captured DLN’s attention and fostered an ardent devotion to B.M. Srikantaiah under whose aegis he would later complete his Master’s qualification.

Narasimhachar joined Central College, Bangalore, in 1927 for his Bachelor’s Degree. His chosen subjects here were Chemistry and Physics. As he scored high marks in Kannada, he joined MA Course (in Kannada) at Maharaja’s College, Mysore. Here, his classmates included K.V. Puttappa, K.V. Raghavachar, Anantarangachar and K. Venkataramappa. While at Maharaja’s College, he came under the tutelage of B.M. Srikantaiah, Rallapalli Anatha Krishna Sharma, C.R. Narasimha Sastry, T. S. Venkanayya and A.R. Krishna Shastry. During his free time, he would frequent Oriental Research Library to peruse old Kannada manuscripts. Narasimhachar completed his MA in 1929 and was awarded the H. V. Nanjundaiah Gold Medal.

DLN was among the first to secure a research grant set aside for the Kannada Department. The Research topic was on the period during which Veerashaiva Literature developed in Karnataka. His first job was as a resident lecturer at Oriental Research Library. Concurrently, he was taken in as a part-time lecturer at Maharaja’s College Kannada Department.

DLN married Muthamma, last daughter of Tiruvallur Sreenivasa Raghavachar, who was himself a great Kannada Scholar. Raghavachar’s residence was a treasure house of rare Kannada books. Narasimhachar utilised this veritable library and penned “Pampa Ramayana Sangraha.” The couple’s first issue was a daughter by name Rajalakshmi. Their second child, a boy, died early in his childhood and this was a great loss to the parents. They would have four more children — Prabha, Padmini, Jayashree and Madhavi.

DLN is famously believed to have dissuaded his first daughter from pursuing Kannada Studies for BA degree. He felt that if she happened to secure a first rank in BA degree, then the gossiping tongues would blame him for favouritism and nepotism !

DLN had a penchant for ‘snuff’, something he picked up from his close friend Kuvempu. Interestingly, Kuvempu is believed to have later given up the habit, whereas his friend continued it till his later years.

Narasimhachar was appointed full-time lecturer in Kannada in 1932 at Maharaja’s College. He remained here for the next seven years and was deputed to the Intermediate College in Mysore (present day Yuvaraja College) from 1939 to 1941. His promotion to the post of Assistant Professor saw him being transferred to Bangalore Central College in 1945. By 1948, he was promoted and consequently transferred back to Maharaja’s College, Mysore.

In 1954, he was appointed Chief Editor of the ‘Kannada-Kannada’ Dictionary Project — a role which required him to again relocate back to Bangalore! Two years hence, by 1956, he was promoted to the post of Professor and came back to Maharaja’s College where he would teach for the next six years before retiring in 1962. His teaching tenure spanning thirty years from 1932 – 1962 was divided almost equally between Mysore and Bangalore.

Following his retirement in 1962, he was appointed UGC Research Fellow for the next six years at the University of Mysore — Department of Kannada Studies. On the demise of T.N. Srikantaiah, he took over the position of Chair of ‘Kannada-Kannada’ Dictionary Project. He eventually presided over the official release of the first edition of the Dictionary. During these years, he published his magnum opus on the art of ‘editorship’ titled “Kannada Grantha Sampadane.” This hectic schedule sadly resulted in him suffering his first heart attack in 1965. Between 1959 and 1963, he edited the prestigious academic journal “Prabuddha Karnataka” on behalf of Prasaranga of Mysore University.

Narasimhachar delivered many lectures on Mysore Akashvani (later AIR). His radio address in 1943 on contemporary Kannada poetry dealt with many elements, which critics later considered to be an early foretelling of ‘Navodaya Literature.’ He penned a memorable preface to K.S. Narasimha Swamy’s famous work “Shilalathe.” His love for ‘Halegannada’ saw him evince keen interest in Epigraphical studies — resulting in a close involvement in the publication of successive volumes of ‘Epigraphia Carnatica.’

DLN authored four major works in Kannada, edited about nine comprehensive volumes, penned about eleven prefaces, close to eighty-odd articles across three decades, seven monographs in English and four masterly introductions to various books. His introduction to ‘Vaddaradhane’, ‘Pampa Ramayana Sangraha’ and ‘Sukumara Charitam’ are the best of their kind in Kannada.

Narasimhachar’s scholarship was vast. In fact, it is believed that T.N. Srikantaiah once remarked that “DLN’s name was synonymous with scholarship!”

He was an ace linguist, grammarian, lexicographer, editor of numerous volumes, epigraphist and literary critic. He roughly churned out eighty research articles in forty years in both Kannada and English. Always seen in a close collared coat and dhoti, he was humility personified.

He was honoured on multiple occasions by the Kannada Sahitya Akademi. He presided over the 41st Kannada Sahitya Sammelana at Bidar in 1960. He received two Felicitation Volumes — “Jnanopasaka” (1960) and “Upayana” (1967) with rare articles penned by subject experts and close friends. The Government of Mysore awarded the Kannada Rajyotsava Award. In recognition of his Lifetime contribution to the world of Kannada Studies, the University of Mysore bestowed on him an Honorary D. Litt in 1969.

The relentless pace of work sadly resulted in a second fatal heart attack on the night of 7th May 1971. He was 65-years- old at the time of his death. He is cherished by generations of Kannada scholars (many of them his students) who remember his affable, affectionate bearing which often concealed a mountain of intellect.

The Mysuru City Corporation (MCC) has named the Fifth Cross Road in Saraswathipuram after this great soul.

2 COMMENTS ON THIS POST To “D. L. Narasimhachar: The Epitome of Scholarship”