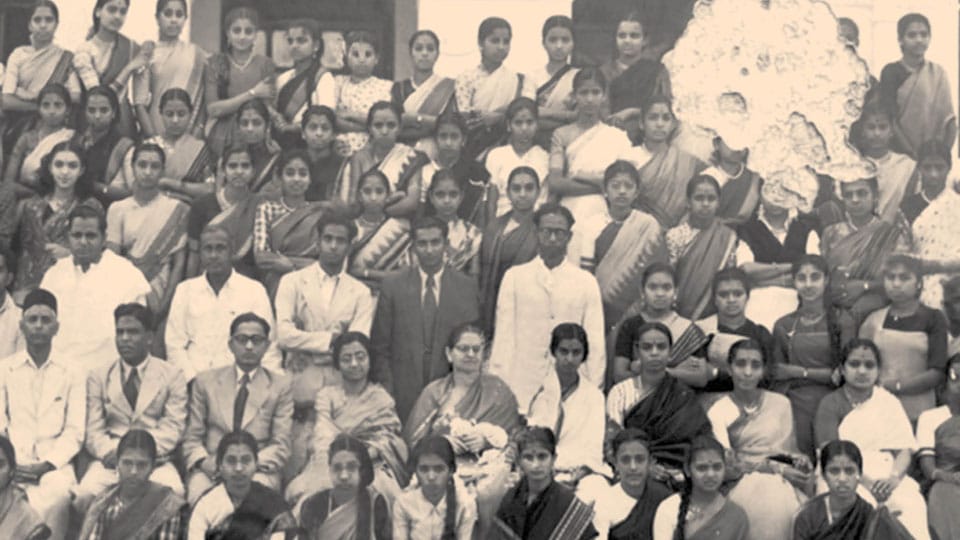 My memories of Maharani’s College, Mysore [now Mysuru], come to life whenever I pass the building where I studied seven decades ago. In the heart of the city, the College is still painted in the classic pale yellow and emerald green of old Mysore buildings. It is surrounded by old rain trees with spreading branches. Students would sit in their shade to chat or eat their lunch.

I had been a lonely, home-schooled girl until I passed the SSLC privately and could join the Intermediate College. I was nervous about interacting with my peers. Most girls in those days, wore saris or “Langa-davani” [half sari]. But I was “sensibly dressed” by my mother Mukta. She kitted me out in what was then called “Punjabi Dress”;  a kurta-pyjama outfit and a “chador” [a Farsi word she had found for chunni or veil]. Naturally, I got teased. “Enu, ninu Mysuru hudugiallava? Punjab inda yavaga bande?” [Are you not a Mysore girl? When did you come from Punjab?]

The College was established by the far-sighted Maharani Kempananjammanni Vani Vilasa Sannidhana in 1917 for women’s education. Broad verandahs with arched pillars encircled the ground and upper floor. A wooden staircase with a wide bannister led upstairs, the steps worn down and polished smooth over the years by the cascading feet of many young  girls. Across the road was the Hostel.

My first friend was Cauveriamma from Coorg [now Kodagu] and she introduced me to two girls  in the Hostel; Bollamma and Dechamma. Bollamma was plump with twinkling eyes and a dimpled smile.

Dechamma was a beauty with a chiselled nose, arched black eyebrows and dark eyes while her cheeks were tinged with pink. They were friendly and generous, hospitably sharing treats that came from their homes in Kodagu.

While Cauveriamma stayed in touch till she passed away some years ago, I sadly lost contact with the others.

READ ALSO  A brief sojourn in a Chinese Villa

The Principal was Jayalakshammanni, an Ursu lady. She was tall with an extremely “fair” complexion. Her natural reserve and imposing personality quelled the pupils without her having to speak at all.

Gangamma, the History Lecturer, presided over the most interesting classes we had. She too was from Kodagu. A slender woman of medium height, she had a remarkable rapport with the class.

Her tasteful sarees were worn with delicate jewellery; a triangular gold pendant on a thin chain or a double tiger-claw charm, glass bangles which tinkled as she gestured during her spirited lectures. The first lesson was about Mohenjo-Daro. She roused our interest describing the bust of the Priest King of Mohenjo-Daro, his head band, the floral design on his robe. She described the famous “naked” statuette of the Dancing Girl, “She wore no clothes girls, only many bangles!” which brought the house down.

We were required to study Greek and Roman history in addition to Indian history. Even the complicated sagas of the Peloponnesian Wars, the Athenians, Spartans and other warring Greeks were enlivened by her lectures.

Logic was taught to us by H.T. Shanta, who is remembered in Mysore University circles for her erudition in philosophy. She lectured us on subjects like the Fallacies in Logic, giving us a break when the lessons became abstruse or hard to follow. With just ten minutes to the bell, she would relate funny stories or ask a good singer in the class to render a “fillum hit.”

Once we discussed superstitions; that it is unlucky to walk under a ladder or have a black cat cross your path. The one that appealed to her most had been taught to me by my mother. It was about crows:

Three for a letter

Four for a boy

Seven for a secret never told.”

The English lecturer was Sharada. Pupils who were not proficient in English were in awe of her. After reading a poem aloud, she would ask the student to explain it line by line. I was asked to paraphrase “On Westminster Bridge” by William Wordsworth. Drilled by my mother, I already knew the poem. However, I slipped up when asked the difference between “riot” and “ryot.”

My second language was Hindi. I was in a class of just a few girls. Our Lecturer, R. Deve Gowda, was a big, swarthy man with crisply curling hair and a strong jaw. He had studied at the Banaras Hindu University. Apart from our serious texts, he  would regale us with Hindi Dohas [couplets] from Kabir, Tulsidas or Rahim [the Sufi Abdul Rahim Khan-i-Khanan, 1556-1627, of Emperor Akbar’s court]. A Doha by Rahim on marriage ran like this:

“Rahimanbiyahbiyadi hai, sakuhu to lehubachai, Paayanbediparat hai dholbajai, bajai.” [Rahim says marriage is like an ailment, to be avoided if possible. Fetters are placed on the feet while drums are played]

Recalling it now, I began to wonder if a Sufi mystic really wrote this! The Doha was found by a helpful friend, just as I remembered it long ago…on an Osho blog !

These first two years in the University were the formative ones in our life; honing our talents, channelling our interests in the best direction. Now I see the splendid new Maharani’s College on Valmiki Road. On the pavement there, under green and white striped awnings, flower shops display ready-made bouquets or tubs of gladioli, gerberas, lilies, roses and chrysanthemums.

Until the pandemic, the  bright faces of the girls going home from class and their colourful attire were a counterpoint to the floral colours. I hope that the hopes and ambitions of these young Indians are realised. Decades hence may they also think back on their days in Maharani’s College with pleasure as I do.