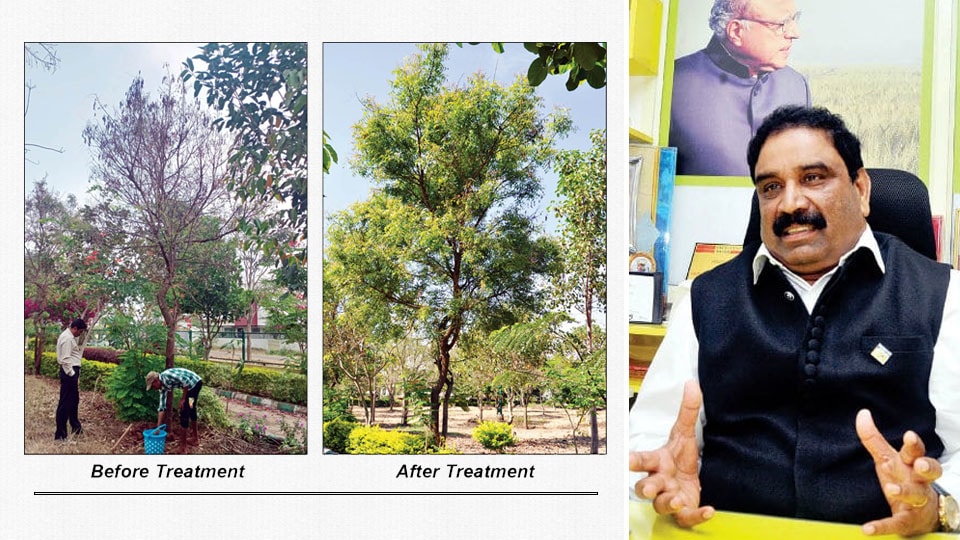 Wilt, canker, rust, decay, burns, pathological and fungal diseases — anything can hit a tree in our locality. What else can we do other than letting it die? No, think twice. Dying trees can be saved as this ‘tree doctor’ from city has proved it by saving Neem trees that are considered as a ‘doctor tree’ thanks to its medicinal properties.

City’s Agri Scientist and avid researcher Dr. Vasanth Kumar Thimakapura, who is popularly known as ‘plant doctor’, has saved ten Neem trees of a Park in Vijayanagar Third Stage. The model adopted by him can save many dying trees at Parks and green areas inside Mysuru city.

“I noticed ten Neem trees during my routine walks and I thought that the trees can be saved. I took up the treatment voluntarily with some of the plant medicines developed by me and within three months the trees have recovered beyond recognition. All the trees I treated have recovered fully and they look much more healthy and vigorous now,” he told Star of Mysore.

Normally, controlling soil-borne root diseases is practically not possible especially in tree species. Root is the most important organ of the plant for its anchoring to the soil and also to get its supply of water and nutrition to the above ground parts.

“Initial stages of any infection of roots go unnoticed until the symptoms of the damage are visible on the leaves and branches of the plant or tree, as roots are underground and invisible. Hence, root infections are noticed only at advanced stage of the infection where the plant starts to wilt. That is the reason why it is difficult to control them as the infection would have crossed manageable levels,” he said.

Further, it is more complicated as the cause of the problem could be multifaceted and it is impossible to take a look at the damaged root for diagnosis and suitable treatment. May be because of these reasons such wilting trees do not get any attention and they are left to die, he added.

“I regularly see many trees wilting at places including Manasagangothri campus, Kukkarahalli Lake and surroundings. These trees are left to die and it is a loss for our city. Unfortunately, we do not have permission to enter the campuses and take up voluntary tree treatment. I am ready to help the authorities if they join hands with me for tree rejuvenation.”

Explaining the process of saving the trees, Dr. Thimakapura said that the medicines were diluted and directly poured onto the roots and gradually the trees came back to life. “We took up the task during dry months where we poured diluted medicines directly to the roots. We poured 10 to 20 litres of the diluted solution per tree depending on the size of the tree,” he said and added that this treatment is similar to the treatment given to the roots of pepper vines.

He said that the same model can be adopted by authorities to save many trees that are dying inside the Parks and green landscapes.

Dr. Thimakapura has many achievements to his credit. He recently published a book titled ‘Plant Doctor’ which is a practical and pictorial manual for diagnosis and management of deficiencies, diseases and insect pests. He has developed a product called ‘Power Plus’ that cures even virus diseases of many crops especially Papaya Ringspot Virus. He can be contacted at: [email protected] for any help regarding plant health.