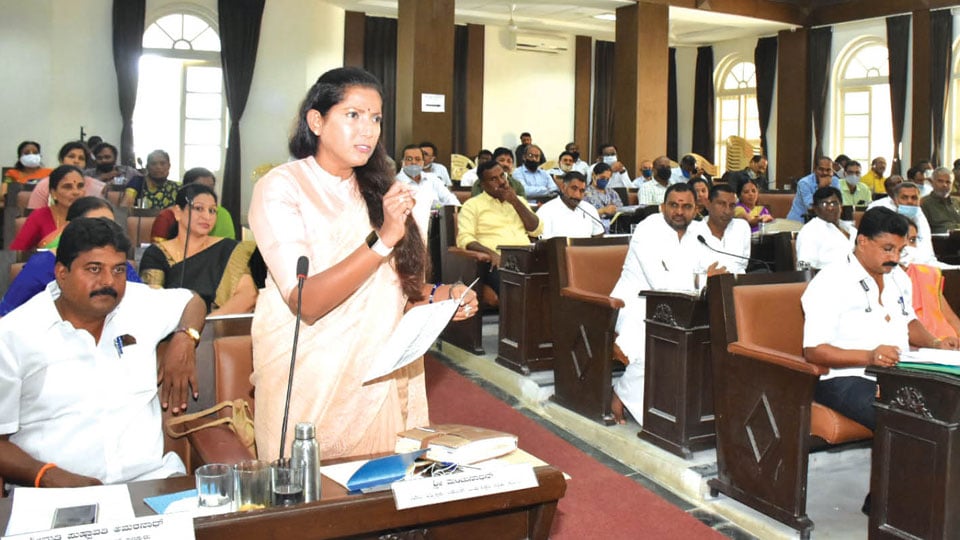 Mysore/Mysuru: With rural areas of Mysuru facing a drinking water crisis, members of Mysuru Zilla Panchayat (ZP) have decided to go on a delegation to Vidhana Soudha, the seat of power, in order to draw the attention of the Government.

The decision was taken at the ZP  General Meeting held  at ZP Hall here Saturday, which was chaired by ZP President Parimala Shyam.

Soon as the meeting began, several members expressed anguish over the working of RO Plants across the district. Alleging that contaminated water containing germs is coming out of RO Plants and other drinking water units, the members questioned over the quality of RO Plants that have been installed in their constituencies.

ZP Members Dr. Pushpa Amarnath, Venkataswamy and Achyutananda alleged that the  funds reserved for setting up RO Plants under Special Component Plan (SCP) and Tribal Sub Plan (TSP) schemes have been misused by officials and sought to know the action taken against errant officials.

ZP CEO B.A. Paramesh said that a fact-finding report has said that pure drinking water units funded by SCP and TSP grants have been set up in areas where SC/ST population do not live. The Government will be sent a report in this regard and disciplinary action will be taken  within two weeks against those officials who are found guilty of wrongdoing.

However, the members not satisfied with the ZP CEO’s reply, wanted registration of an FIR against errant officials for misuse of funds meant for SC/ST schemes.

Some members alleged that the door delivery of nutritious food undertaken by the Women and Child Welfare Department was not going on in an appropriate manner. Admitting that the allegations levelled were true to a large extent, ZP President Parimala Shyam said that a team will be formed to probe the charges. The team will be asked to submit its report in a week, she added.

Dr. Pushpa Amarnath, who  raised the issue of MGNREGA (Mahatma Gandhi National Rural Employment Guarantee Act) grant dues, alleged that Hunsur taluk was yet to get Rs. 7 crore dues under the scheme and wondered what the Government was doing to provide employment to the rural masses.

ZP CEO Paramesh said that the district has set a target of Rs. 137 crore for the execution of MGNREGA scheme, out of which the Government has released Rs. 119 crore, while there is a due of Rs. 34 crore, inclusive of additional works that were carried out under the scheme. The Government will be appealed to release the funds, he added.

ZP Member from Mysuru taluk Chandrika Suresh accused the Asst. Director of Department of Youth Empowerment and Sports (DYES) of hosting a dinner at his office in violation of norms. Claiming that she had proof of hosting the dinner, she also alleged that the official had allowed his wife to distribute sports equipments to beneficiaries.

Responding to the allegations, DYES Assistant Director Omprakash said that he took charge only on Sept. 7 last year and subsequently members of several sports and cultural organisations came to his office to greet him. At the same time, his wife and other members of his family too arrived at the office all of a sudden and cut a cake. This is actually what happened, he said and denied the allegations that he had hosted a dinner party at his office.

Clarifying on the issue of distribution of sports equipment by his wife, Omprakash said that 9 coaches of the Department were distributed sports wear, out of which the last two were distributed by his wife after some of the programme attendants asked him to do so.

There is no corruption or illegality in the purchase or distribution of sports wear and equipment, he maintained and added that he was ready for any probe into the matter.