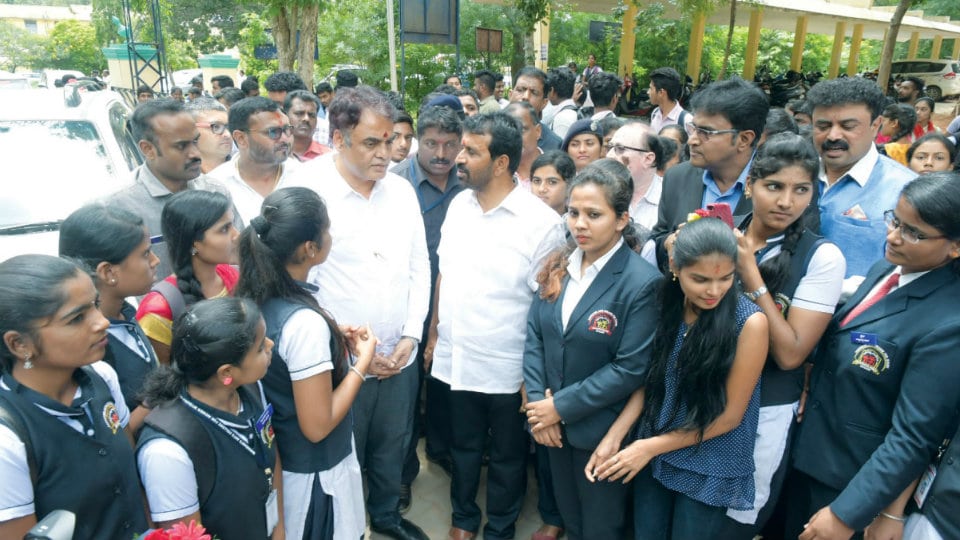 Mysuru:  Deputy Chief Minister Dr. C.N. Ashwath Narayan who is also the Minister for Higher Education, IT and BT has assured to construct a compound wall at the fenced side of Maharani’s College of Arts and Science on JLB Road here.

The Deputy CM who visited the college campus here yesterday as part of his official engagement, was apprised of the problems by student leaders and faculty. The students also demanded laptops to all students, irrespective of the category they belonged to.

When students complained of shut library and wired-fencing which was of no use, Ashwath Narayan assured to construct a compound wall at the fenced side of the college and thus ensure security and safety of students. He also assured to take necessary measures for re-opening of the closed library.

Speaking on the occasion, the Dy.CM said that he has received several complaints on lack of infrastructure in many Government Colleges and he would seriously look into the matter.

Explaining his agenda for better infrastructure in colleges, the Dy.CM said he was working towards linking Educational Institutions with IT and BT companies for projects and internship and the model in this regard was being finalised.

He further said that the Higher Education Department was exploring avenues where students can hone their skills and get employed.

MLA L. Nagendra, who also spoke, said that the Dy.CM has responded to his plea of constructing the college compound wall and also to improve the college infrastructure.

Dr. Ashwath Narayan was felicitated by students and the college faculty on the occasion.