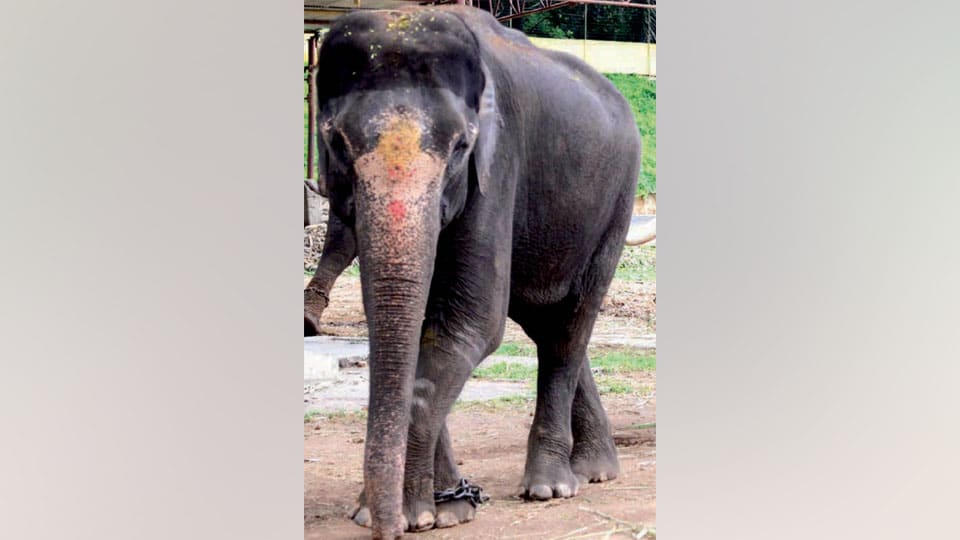 Mysuru: Elephant ‘Varalakshmi’ which had joined the first batch of Dasara elephants to participate in the Jumboo Savari returned to the forest camp reluctantly yesterday.

While it was moving around in the Mysore Palace premises where the elephants, mahouts and kavadis are camping, it was found that Varalakshmi was pregnant and hence it had become inevitable to return it to the forest camp from where it had come.

Yesterday, after the traditional prayer, it was given a tearful send off, back to the Mattigodu camp. When a lorry was brought near it to take it back, Varalakshmi sensed that she was going to be taken away and hence ran away from the spot and joined the other pachyderms, almost telling ‘I will not go back but stay here with my other mates.’ The others who watched this move of the pregnant elephant were also in tears.

Varalakshmi had come to Mysuru on Aug.23 and on Aug.26 along with other mates, camped in the Palace premises. From Aug.28, she started participating in the rehearsals. Meantime, the Veterinary doctors confirmed that she was pregnant during the regular check-up.

In the light of this, she was given special, nutritious food and being taken care of. Because of her condition, she was not allowed to participate in the cannon drill rehearsal. There were many who had objected for bringing a pregnant elephant to participate in Dasara.

Staff become emotional: After a decision was taken to send Varalakshmi, 63, back, a lorry was brought yesterday morning. Mahout J.K. Ravi and Kavadi Madesha and their families were shifting their belongings into the lorry and closely watching this from the spot where she was standing, she looked at the lorry when it was brought near her with a look of disdain.

Varalakshmi refused to climb the lorry and instead went and stood near the other elephants. Seeing the predicament of the pregnant elephant, the other elephants, mahouts and kavadis shed tears. Finally, she was won over and left the Palace premises with a heavy heart.

Elephants are emotional animals. They watch the developments around them very closely. They have a gestation period of 18 months and hence it was thought that Varalakshmi could be kept for some more days and looked after. However, a few had taken strong exception to the presence of the pregnant elephant and hence, it was sent back to the forest camp.

The gentle elephant was captured in the Kakanakote forest in 1977 and was participating in the Jumboo Savari since the last ten years. This would have been its 11th year.