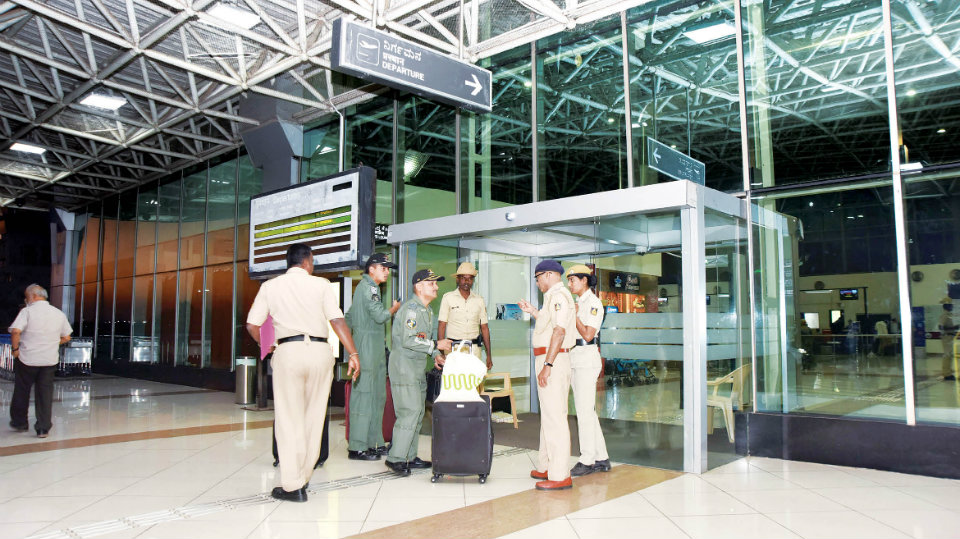 Mysuru/Mysore: The City Police have sounded an alert in Mysuru after a bag containing a live bomb was found near the entrance of Mangaluru Airport on Monday. Sources said that it is a general alert sounded as per standard operating procedure. Following the alert, checking and patrolling has been intensified in the city and all Police wings including Dog Squad, Intelligence Cell and armed battalions have swung into action, the sources added.

Meanwhile, security has been heightened at Mandakalli airport and other public joints such as KSRTC City and Sub-urban bus stands, Railway Station and popular tourist spots. Additional Police personnel and Chamundi Command Force have been stationed at the entrance  and exit gates of Mandakalli airport, Runway, parking lot and entire premises of the airport.

Security personnel are standing guard atop the Airport terminal building, keeping a watch on any suspicious movements. Security has also been beefed up at important tourist destinations such as Palace, Jaganmohan Palace, Karanji Lake and Chamundi Hill and key and sensitive Government establishments like CFTRI, DFRL, RBI, Bank Note Paper Mill and CSRTI. The Police have intensified checks at checkposts on Highways.

City Police Commissioner K.T. Balakrishna has asked all the Police Stations to be on high alert and to intensify patrolling and vehicle checking in their respective jurisdiction.

Security at KRS heightened: With the Bomb scare at Mangaluru Airport on Monday hitting the national headlines, security has been heightened at KRS Dam near Belagola in Srirangapatna taluk. Mandya SP K. Parashuram speaking to Star of Mysore said that following a bag containing an IED found at the entrance of Mangaluru Airport causing a security threat, more than a hundred personnel of Karnataka State Industrial Security Force (KSISF)  have been deployed at vantage points at KRS dam. Also Additional Police Force has been stationed at other important tourist destinations such as Ranganathittu Bird Sanctuary, tourist spots in and around Srirangapatna town and the Market. CCTV Cameras installed at key locations and prominent public joints such as bus-stand and Railway Station are being constantly monitored  for any suspicious and irregular movements. The Dog Squad, Bomb Disposal Squad have been put on alert and the public need not be worried over their safety and security, the SP said.