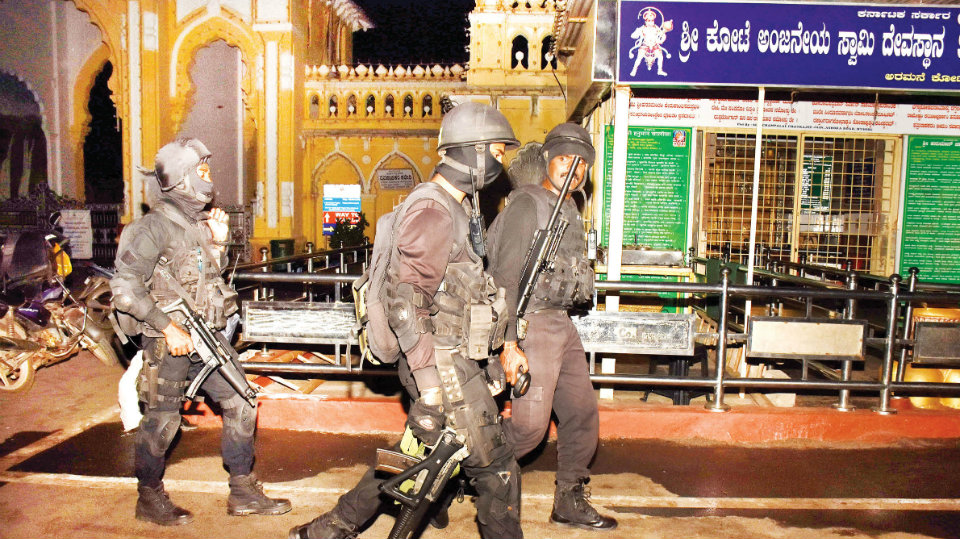 Mock Counter-Terrorism Drill by NSG Commandos at Mysore Palace ends at 2.30 this morning

Mysuru/Mysore:  Continuing their ‘operation’ for the second day on Monday, Commandos of the elite National Security Guard (NSG), a counter-terrorism unit, conducted a ‘Mock Drill’ at Mysore Palace premises last evening. The Mock Drill which commenced at around 5 pm concluded at  2.30 am today.

NSG Commandos from Chennai carried out the Mock Drill to check their preparedness for any eventuality at the Palace.

The ‘exercise’ started with the City Police Control Room and Palace Security Office receiving a ‘mock terror attack call’ at 6 pm, following which DCP M.Muthuraj and other Police personnel, after alerting the Garuda Commando Force at Bengaluru and  NSG Commandos at Chennai, rush to the Palace.

The Police, after closing down all entrances to the Palace, made public announcements asking the people not to move around. Thereafter, the city cops along with 200 trained Armed Commandos, checked every corner of the Palace and stood guard in and around the Palace premises. The forces in action were in communication with the Palace Security Office  and the Police Control Room, updating the Police Officers every moment.

The commandos who began their ‘counter action’ from the Eastern Gate of the Palace, wage a battle with the holed up terrorists for about 45 minutes and finally succeed in cornering the terrorists. The ‘Mock Drill’ ended at 2.30 am this morning with the Commandos declaring that all the terrorists were flushed out of the Palace and there was no security threat.

The Palace was shut for visitors after 2 pm yesterday to facilitate the mock drill, which involved various Government agencies including Health and Revenue Department, the Disaster Management Cell, Airport authorities and Internal Security Wing of the Police.

The aim was to sensitise officers of all the Departments concerned on their role and responsibilities in case of  terror attacks and how they should swiftly respond to the situation.

The drill was conducted in the city keeping in mind the location of famous tourist spots, crowded areas, vital installations and sensitive Government establishments. According to sources, the Commandos analyse the situation if there is a terror attack on the selected target and what procedure should be followed and action taken.

On Sunday, similar drills were conducted in IT establishments like Infosys and Wipro and other key Government installations in and around the city, it is learnt.