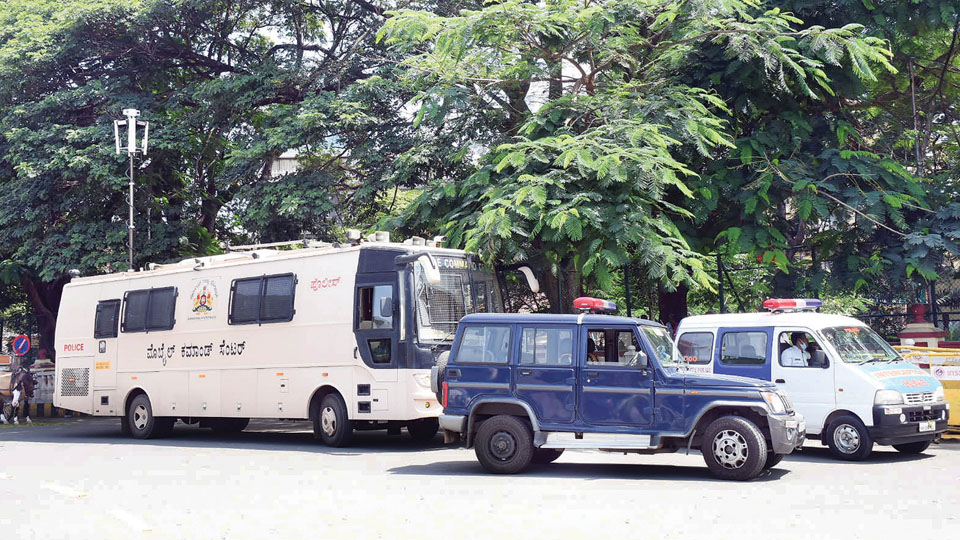 The drive has been initiated after orders by City Police Commissioner Dr. Chandragupta in the wake of recent gang rape at the foot of Chamundi Hill and also the shooting-cum-dacoity incident at a jewellery store in Vidyaranyapuram.

This apart, the entire mobile machinery including the hi-tech Mobile Command Centre has been pressed into service to team up with Garuda and PCR vehicles at isolated places to keep an eye on movements of criminals before they commit the crime and at the plotting stage itself.

The Command Centre vehicle has advanced features including recording of the movements and will act as a deterrent to miscreants. Along with the surveillance of hostels, College campuses and other working women’s hostels, the Command Centre will also patrol secluded spots and the Outer Ring Road, tracking the movements of people along with time, vehicle number and other details.

The database will be used to crack and prevent crimes.

Speaking to Star of Mysore this morning, City Police Commissioner Dr. Chandragupta said that in the wake of brutal crimes and also as Dasara festival is approaching, the surveillance machinery has been stepped up. “Instructions have been passed on to all the Police Stations, especially where a majority of the ladies hostels are situated, to keep an eye on visitors and the inmates. Special Branch Officers have been asked to visit each PG accommodation and hostel and see if adequate security measures are in place,” he said.

Sometimes, criminals in the guise of students and IT-BT employees stay in PGs. As all lodges, hotels and shelter homes insist on production of identity proofs such as Aadhaar Card and have CCTV cameras installed in their premises, anti-social elements take shelter in PGs and secluded homes as many of them do not insist on identity proofs.

“We have found that criminals take shelter by creating fake documents and some PG owners are admitting them without bothering to check their identity, as they get more money. Our staff will ask all PGs to check the background of all the inmates and also ascertain the veracity of the documents produced by the inmates as proof of their identity,” Dr. Chandragupta said.

The Police are instructing the PG owners to affix CCTV cameras both inside and outside the accommodations with a minimum storage capacity of visuals for three months and regularly update information about the inmates to the jurisdictional Police Station. Apart from carrying out checks, the Police are keeping a close watch on suspicious movements in lodges, hotels, restaurants and secluded houses and serviced apartments as part of the security measures taken to ensure the safety and security of the citizens.

Till now, the Mobile Command Centre was only used during Dasara and also during lockdowns to enforce rules.

“The vehicle has 18 cameras including six inside the vehicle and the rest outside that can capture images in one kilometre radius and we are using it for surveillance of secluded spots. All the recorded information is transmitted live to the Command Centre at the City Police Commissioner’s Office,” Dr. Chandragupta added.

ONE COMMENT ON THIS POST To “Echo of gang rape at Chamundi foothill: Ladies PGs, hostels under Police scanner”