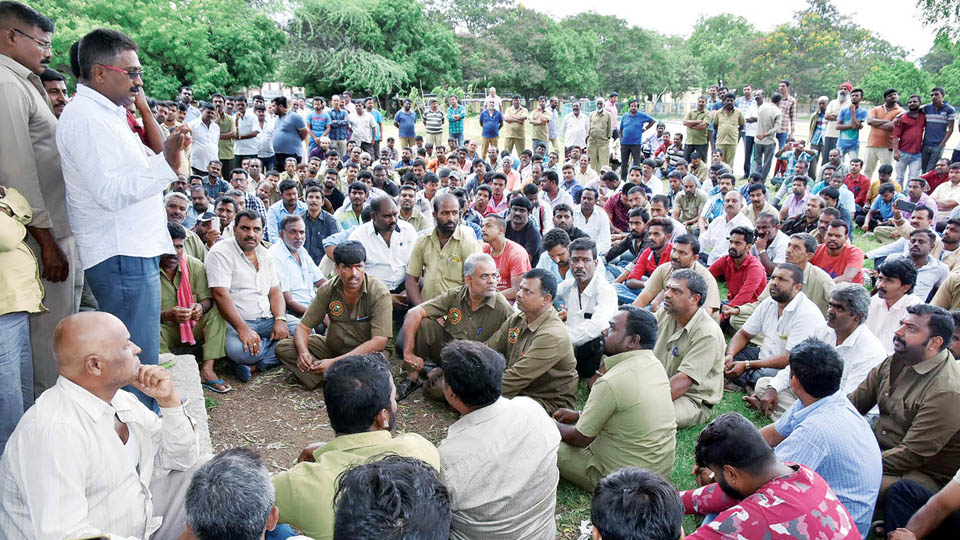 Mysuru: Over 500 auto drivers, who ferry school children in their vehicles from various areas in city, staged a protest at Oval Grounds this morning against the Police action on them for carrying extra school children (more than the capacity of the vehicle).

It may be recalled here that on June 22, the City Police launched a crackdown on auto drivers, van drivers and owners for overloading children in vehicles and driving in break-neck speed through the city’s streets risking the lives of children and their own lives.

On that day, the Police booked over 100 cases against erring drivers who refused to comply with Supreme Court guidelines on the number of children to be ferried in a vehicle. The drive was launched to check seating capacity, condition of vehicles, driver details and other norms.

The auto drivers assembled at the Oval Grounds soon after their morning duty of dropping children and raised their voice against what they called “Police excesses” in booking cases against them. The protest was held under the banner of Mysuru City School Auto Drivers and Owners Welfare Cooperative Society and was spearheaded by Society President Lakshminarayana.

Opposing the Police move, the auto drivers demanded that they must be allowed to carry eight children in an auto and 12 children in an Omni van. Going by the guidelines, an autorickshaw can carry only four children over the age of 12 and five if the children are below 12. In Mysuru, an auto carries six to nine children with their bags along. An Omni vehicle is allowed to carry six or seven children but instead the vehicle carries more than 15 children.

Auto drivers demanded a full stop to the Police action and allow them to ferry children. “We don’t risk the lives of children. It is our livelihood and we too have children. Why on earth we would risk our own safety,” questioned an auto driver.