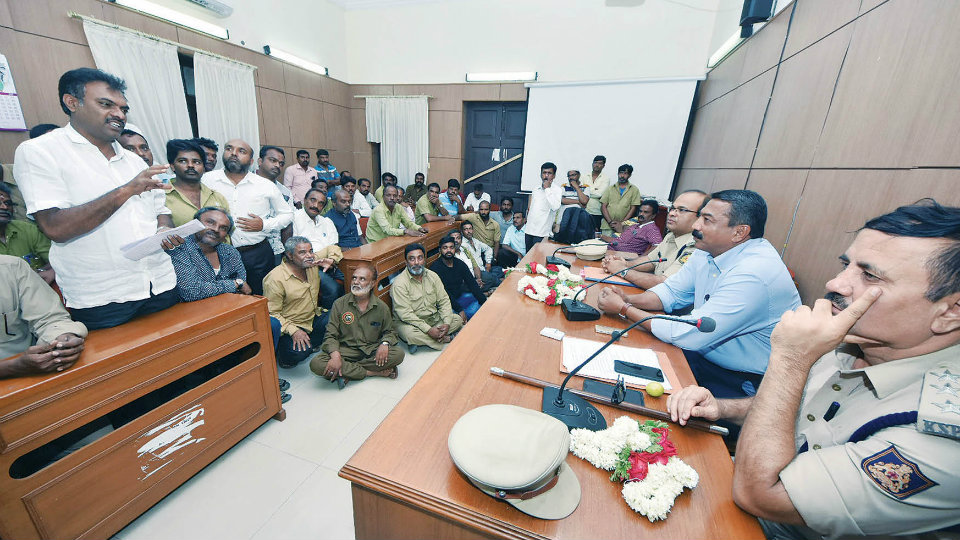 Mysuru: Soon after autorickshaws ferrying children to schools staged a protest at Oval Grounds this morning against the penalties levied by the Police for overloading their vehicles with children, the City Police held a meeting at City Police Commissioner’s Office to educate these drivers on the Department’s and Supreme Court guidelines.

Over 300 auto drivers attended the meeting.

The Police told the auto drivers to start complying with the Supreme Court guidelines that are in force. There was resistance to the new guidelines owing to economic factors as the auto drivers argued that they will not get good returns by transporting schoolchildren by adhering to these guidelines. The Police, however, told the drivers that the Supreme Court guidelines and the Motor Vehicle Act cannot be violated and cases will be booked against all drivers who continue violating norms and their licences will be impounded.

The drivers were told that in an auto, three plus one adults (including driver) can travel. When it comes to children, five children (below 12 years) can be accommodated. While the drivers demanded that they must be allowed to ferry six children, the Police rejected their demand.

They were told not to alter seats and make children dangerously sit on side bars. Drivers were asked not to hang school bags on the side mirrors as heavy bags will tilt the balance of the vehicle leading to accidents. Further, drivers who have been booked more than twice in a calendar year for traffic violations like overtaking, jumping red light or violating parking regulations, would also lose their right to carry children.

They would also be required to wear a proper uniform of Khaki trousers and Khaki shirt. All school autos and vans would be required to prominently display that they are being used for the purpose of schools. They would have to be golden yellow in colour and bear an iconographic representation of two schoolchildren, the Police told auto drivers.

All drivers must mandatorily have driving licences, RC and FC for their vehicles and must have the pollution certificates. All autos must have first aid kits and must always carry the details of the schools, students, their parents, home address and telephone numbers to reach out to parents or school authorities in case of emergencies. They were asked to obtain insurances from recognised insurance companies and not to obtain insurances from unauthorised or unrecognised companies.