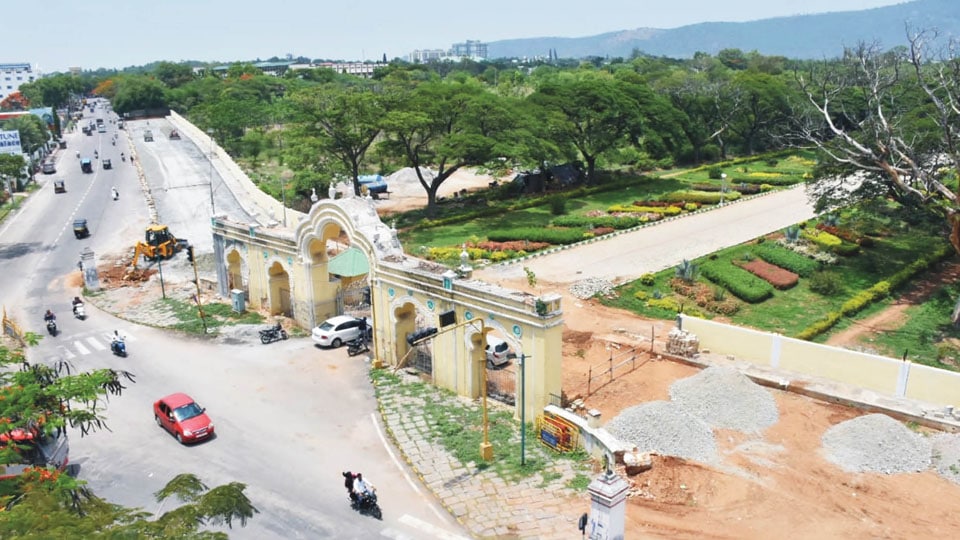 Mysuru: The road widening and development is very important in the city as the vehicle density is increasing. However, the public in the city are upset because crores of rupees are being spent for the development of one particular road.

With the grant from the State Finance Commission (SFC) the Mysuru City Corporation (MCC) has taken up the widening and development work of Abba Road from Five Lights Circle to Hyder Ali Road. MCC has taken permission from the Government to use the land in the Government Guest House premises for development. However, the work from Five Lights Circle to Karnataka Police Academy (KPA) only has been taken up.

There are a few hotels on this stretch and it looks like crores of rupees are being spent for this development which will benefit only the customers of the hotels for the parking of their vehicles. But it will not help the public in any way, the public felt and expressed their ire.

Any project that is taken up for the benefit of the people will be useful only if it is completed at a stretch. However, when one looks at the work on the Abba Road, it looks like more than being beneficial to the people, it is dangerous.

It is more than six months since the road-widening work on Abba Road into a six-lane road began. Even then it is not being done in a systematic way. The road is being laid only till KPA compound. The road now stretches even behind the Government Guest House heritage north gate arch entrance.

The vehicles coming from Dr. B.R. Ambedkar Cirlce  (FTS Circle) side to the Five Light Circle cannot go around the north gate arch entrance. Hence, the vehicles must use the old road itself.

Since the heritage north gate arch entrance cannot be shifted, there is no use of the road widening or its development as it does not help in reducing traffic jams, but instead it creates more problems.

The rulers of the past who had a vision had long ago built roads scientifically. But the Abba Road work, in short is a disaster. The authorities concerned must see how best they can retrieve the situation, feel the public.

The aim was to develop Abba Road from Five Light Circle to Hyder Ali Road into a six-lane stretch. After obtaining permission from the government to utilise the space inside the Government Guest House, the work was taken up from the government grant of nearly Rs. 3.5 crore and the road development work is going on in this 420-metre stretch widening it by 30 metres on either side. The work will be completed shortly.  The work on the damaged historical arch as per the heritage building protection norms without demolishing and damaging its originality as per the guidelines laid down by Department of Archaeology, Museums and Heritage will be taken up by the department itself. After the estimate is provided the necessary grants will be sanctioned. As there is a delay in acquiring a portion of land in KPA premises, the work will be completed till there. A letter to the KPA had been written but they had said that they need permission from their central office. If any land has to be purchased then the Deputy Commissioner has to give permission. Hence, a letter has also been written to the DC in this regard, said the officials of MCC Zone7.

2 COMMENTS ON THIS POST To “Public outcry against Abba Road development near Govt. Guest House”