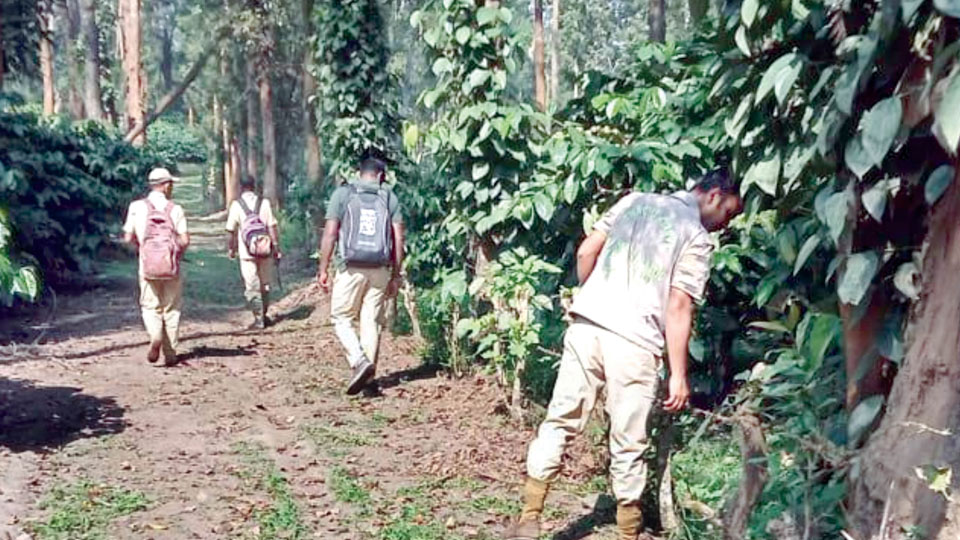 Echo of tigress falling victim to a snare: Anti-snare operation underway at Nagarahole

Hanagodu: An anti-snare operation is underway on the fringes of Nagarahole Tiger Reserve to remove snares laid by poachers to capture wild animals.

Hunting of wildlife using wire snares is one of the major threats to the wildlife and only recently, a tigress, famous as Nayanjikatte Female, fell victim to a snare that was laid to capture wild boars near the Taraka Dam in the Antharasanthe Range of Nagarahole on Nov. 12.

Snaring is one of the simplest and most effective hunting techniques and they are made of loop (noose) of cordage, sharp metal pieces that pierce through the skin of the trapped animal causing severe pain and are placed by hunters and poachers, camouflaged with vegetation across an animal trail or other place where an animal is likely to walk through.

Ever since the carcass of the tigress was recovered, over 300 Forest Department staff including teams of guards and watchers and personnel from the Special Tiger Task Force are combing the boundary line of the Tiger Reserve, hunting for snares that have been placed clandestinely amidst green vegetation.

Their focus areas are the forest fringes that share boundaries with villages or human settlements where the number of snares is usually high as the people do not want animals to venture into their settlements and farmlands.

Snares come cheap and easy to procure and even wires from discarded electric poles and vehicle clutch wires can be converted into death traps. The moment an animal steps through the snare, the noose tightens and most of the animals caught in snares die a slow and painful death. Those animals who manage to break loose are left with serious injuries that get infected later, causing death.

Only a single snare recovered

However, the month-long anti-snare drive at Nagarahole has produced surprising results as so far only one snare has been recovered from the forest fringes. Even after searching hundreds of kilometres, teams could not find any other snares.

Following the snare killing of Nayanjikatte Female at about a distance of 500 metres from the forest towards a human habitation area, the search along the fringes of Antharasanthe Range was intensified but with little success. This has in a way brought smiles on the faces of Forest staff, officers and environment activists.

However, during the anti-snare drive that was conducted at Nagarahole in 2017, 121 snares were recovered from the fences. The discovery of only one snare this time has surprised the officers. However, sources said that soon after the news spread about the death of Nayanjikatte Female, people, who had set up snares, would have quietly removed them to escape detection by the Department staff.

According to Nagarahole Tiger Reserve Director C. Harshakumar, the field staff have been given training on the detection of snares and practical training on anti-snare walk. “We normally adopt a practice to check snares not only in forest areas but also in adjacent agricultural fields as farmers place them to protect the crops from wild herbivores, but these can also trap wild carnivores such as leopards and tigers,” he said.

It is a good thing that only a single snare has been found so far but the drive will continue for some more time, he said.

Apart from increased anti-poaching patrols and snare removals early morning and evenings, the Department also takes up conservation education where people living on the forest fringes and tribal communities are sensitised on cruelty of wire snares and the punishment under Wildlife Act if anyone is caught laying snares, he added.