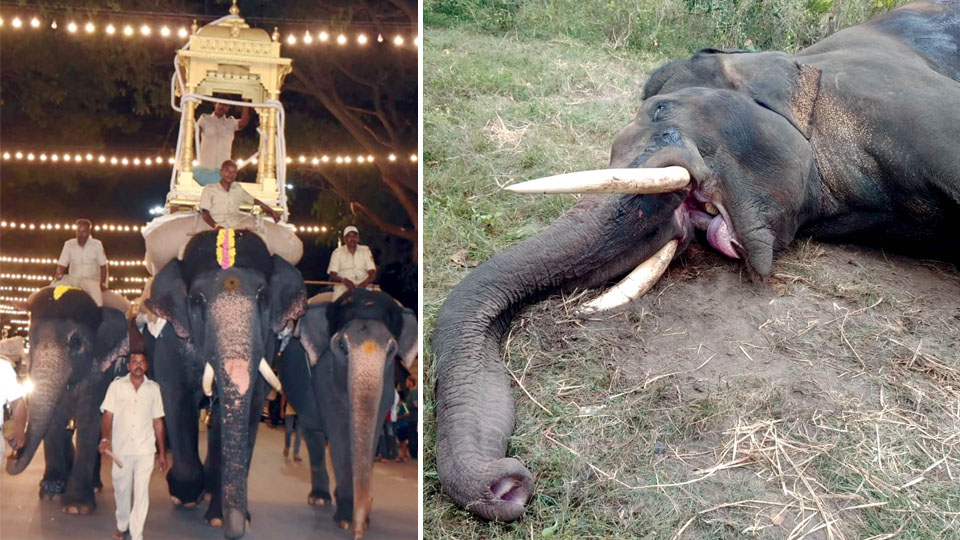 He was touted as the next-in-line Howdah Elephant

Mysore/Mysuru: Dasara elephant Gopalaswami, touted as the next-in-line Howdah Elephant, died at Koluvige Elephant Camp in Veeranahosahalli Range of the Nagarahole Tiger Reserve on Wednesday afternoon. The tusker, aged 39, sustained grievous injuries in a fight with a wild elephant.

Gopalaswami had participated in Dasara and the last Dasara was his 9th. He was mauled by wild tusker, suspected to be Aiyappa, a rogue elephant who was recently captured and radio-collared and sent back into the woods. Aiyappa had created havoc in the area by attacking other tamed jumbos and also was continuously raiding the villages, damaging standing crops.

Forest officials said, the elephants housed in jungle camps are normally allowed to wander in jungles and Gopalaswami was taken from Mathigodu Camp to the nearby Koluvige Camp. The attack on Gopalaswami took place on Monday night.

Gopalaswami had recently participated in a wild tusker capturing operation in Chikkamagaluru and was housed in Koluvige Camp as he was in the state of musth. As a precaution, Gopalaswami was chained and officers said that he would have been attacked by wild tuskers as a couple of wild jumbos were found roaming in the vicinity of Koluvige Camp. Gopalaswami was badly mauled in the fight and its internal organs were lacerated. So severe was the attack that its right hind-leg was broken and flesh with bones was protruding from the gash. This resulted in severe bleeding. Though a team of veterinarians, led by the famed Dr. Chittiappa, treated Gopalaswami, the jumbo succumbed to injuries late yesterday afternoon, officers said.

Gopalaswami was captured in Hetturu in Sakleshpur in 2009 as he was a terror in the region. He was captured and tamed at Mathigodu Elephant Camp. Gopalaswamy weighed 5,460 kgs during the last Dasara and is one of the more majestic elephants who measured 2.85 metres in height. He was second only to the mighty Arjuna who stood 2.95 metres tall. Apart from successfully participating in Dasara, Gopalaswami had earned accolades as he was part of many elephant and tiger capture operations along with the present Howdah Elephant Abhimanyu. Gopalaswami had abilities to withstand stress and hence was a regular in combing operations to capture tigers and wild elephants.

“He had a good height and was mighty too and due to these factors, Gopalaswami was projected as the future Howdah elephant. Also, he had experience of participating in 9 Dasaras. He was a gentle giant and had all the qualities to play the role of the Howdah Elephant. Among all the Dasara elephants, he was composed and performed any role assigned to him without throwing tantrums,” said officers.

Chief Minister Basavaraj Bommai, Mysuru District Minister S.T. Somashekar and MLA S.A. Ramdas have condoled Gopalaswami’s death and said that it would be a difficult task to replace a good tusker like him.