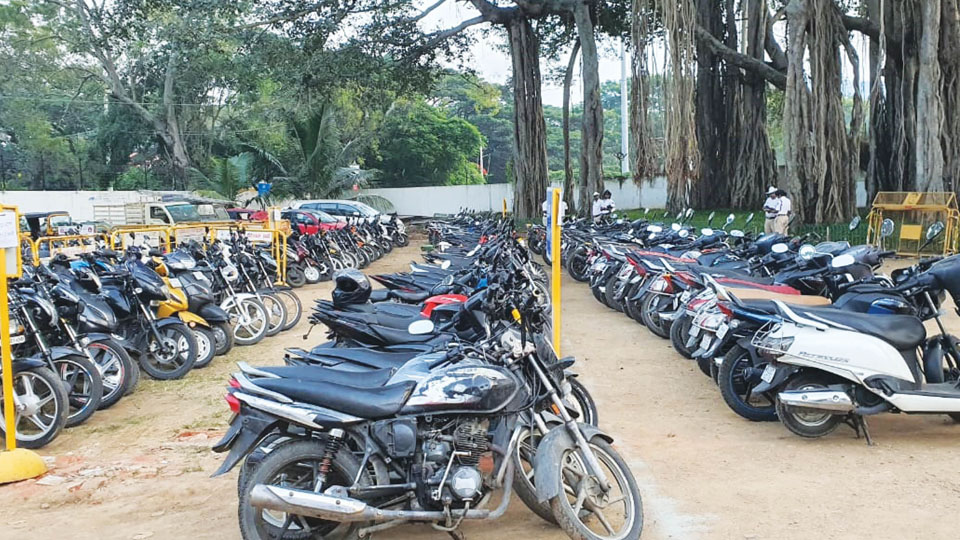 A few college students, those without work and roaming around city and youths doing stunts on their two-wheelers are indulging in triple riding putting themselves and other motorists at risk. Most of the times, the riders lose control over their two-wheelers and hit other vehicles resulting in innocent motorists suffering serious injuries. As the Traffic Police have received numerous complaints from the public in this regard, Traffic Cops have launched this special operation to put brakes on triple riding.

Deputy Commissioner of Police (DCP), Crime and Traffic, M.S. Geetha Prasanna, speaking to Star of Mysore, said that all 145 two-wheelers, that were seized in three days are parked in Siddarthanagar Traffic Police Station premises.

The owners of these seized vehicles should go to their respective Traffic Police Station with all relevant documents, pay all pending fines completely and it is only then the vehicle would be released, the DCP added.

Pointing out that 100 percent fines should be paid for traffic offences such as triple riding, helmetless riding, signal jumping, rash and negligent riding among other traffic offences, the DCP said that after paying the fines at the respective Traffic Police Station, the owner of the seized vehicle should produce the fine paid receipt at Siddarthanagar Traffic Police Station and take their vehicle.

“The registration numbers of all the seized two-wheelers have been noted down and if the vehicle is again caught for triple riding, the two-wheeler will be seized and will not be released at any cost. Criminal case will be registered against the owner of the two-wheeler and also on the person riding it. Drive against triple riding will continue in city,” DCP Geetha Prasanna said.

The DCP and Assistant Commissioner of Police (Traffic) Parashuramappa, who visited Siddarthanagar Traffic Police Station on Wednesday, where all the seized two-wheelers are parked, instructed Inspectors and Sub-Inspectors of all Traffic Police Stations to continue the special drive and also see that the offenders pay all traffic related fines in full and then release the seized vehicles.