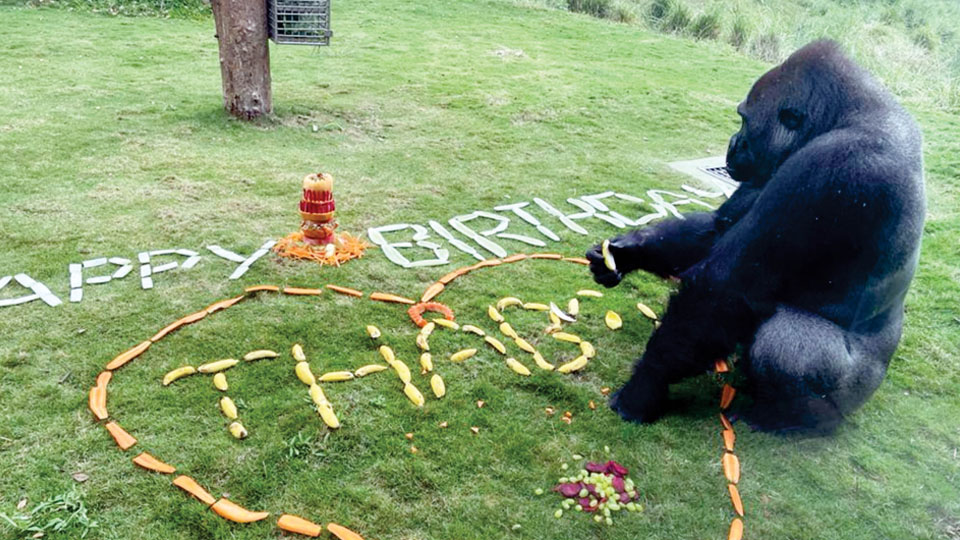 Mysore/Mysuru: Thabo, a Gorilla at the Mysuru Zoo, celebrated its 15th birthday yesterday and the primate was offered its favourite fruits. Zoo authorities have released photos and videos of the celebrations and visuals show the primate walking out from its enclosure to eat the fruits arranged neatly to form its name and patterns.

Thabo was brought from Germany after the COVID-19 pandemic along with another Gorilla named Demba. In January this year, Demba celebrated its 9th birthday.

Following the tradition, the Zoo management had arranged a fruity treat to make it special for the primate and fruits and vegetables like carrot, pineapple, orange, dates, cashew nuts, watermelon, radish, beetroot and cucumber were arranged inside the open area in his enclosure to write ‘Happy Birthday Thabo’.

The primate slowly ventured out of the cage and enjoyed the fruits and vegetables picking them up with both hands while visitors clicked photos on their mobile phones and wished a happy birthday to the primate.

The Mysuru Zoo is the only Zoo in India to house Gorillas — Demba and Thabo — that were brought from Germany through EAZA (European Association of Zoos and Aquaria) under EEP (European Endangered Species Programme).

They were brought to the Zoo seven years after India’s only Gorilla Polo — 41-year-old Western Lowland Gorilla — died in 2014 at the Zoo. Polo was brought to Mysuru Zoo in 1995 from Dublin Zoo and after its death, the gorilla enclosure was vacant until Demba and Thabo were brought from Germany.