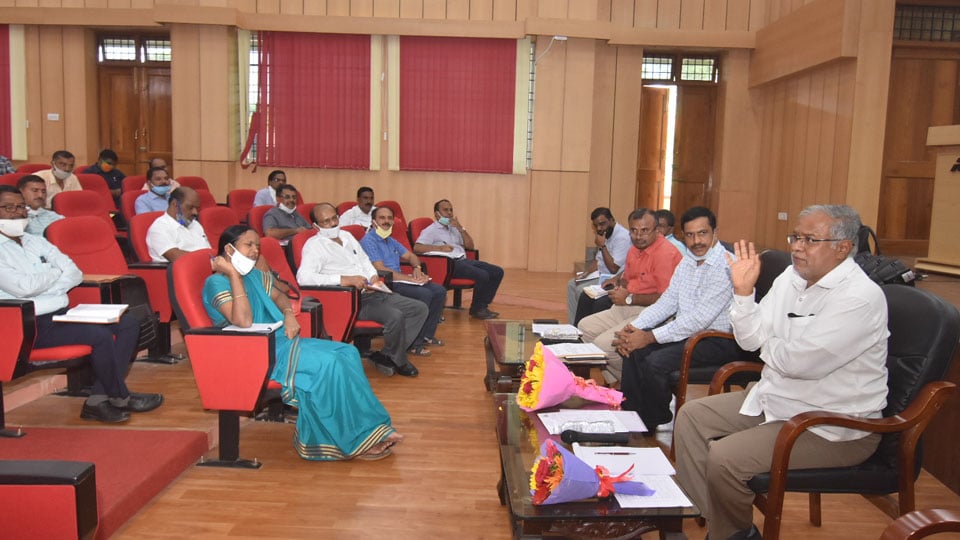 Mysore/Mysuru:  With the rescheduled SSLC exam (2019-20) set to begin from June 25, Primary and Secondary Education Minister S. Suresh Kumar held a meeting with DDPIs and BEOs of Mysuru, Mandya and Kodagu districts to discuss the preparations, at Hemavathi Auditorium in ATI (Administrative Training Institute) premises here on Friday.

Later speaking to presspersons, Suresh Kumar said that the exam scheduled to take place from Mar.27 was postponed due to the COVID-19 lockdown. Now the Government has come up with a new time-table, according to which the exam will be held from June 25 to July 4 and the results will be announced by the end of July.

Stating that the High Court has dismissed a petition by some individuals and organisations who sought cancellation of the exams due to pandemic, he said that the exam will be held as announced in more than 4,000 centres across the State with 8,48,500 students appearing for the exam. “A total of 68,231 students from Mysuru, Kodagu and Mandya districts will appear for the exam in 248 centres, out of which 139 centres (39,882 students) are in Mysuru district, 82 in Mandya district (21,260 students) and 27 in Kodagu district (7,149 students),” he said.

Noting that there are no Containment Zones at present in the three districts, he said that all students appearing for the exam are compulsorily required to wear face masks, undergo thermal screening and use hand sanitisers at the centres.

READ ALSO  Government has failed to protect law and order

Pointing out that each student will be given two face masks for free, he said that Bengaluru’s Shivanahalli Ramakrishna Ashram will be donating 2 lakh face masks.

Referring to the idea of holding preparatory classes ahead of the exams, Suresh Kumar said that the Government is awaiting guidelines to be issued by the Centre regarding opening of Schools and Colleges and as such it is doubtful as of now that the preparatory classes will be conducted. He further said that the revision classes being broadcast in Doordarshan’s Chandana Channel has been a hit among students.

Maintaining that preparations are in full swing in all the 34 educational districts of the State, the Minister said that In-charge persons have been appointed for all the four divisions to oversee the preparations.

Continuing, Suresh Kumar said that migrant students who have returned home along with their parents will be allowed to appear at the exam centre nearest to their place of stay. Also there will be no exam centres in declared COVID-19 Containment Zones and students from these Zones will be shifted to other centres, he added.

Referring to the transport problems that the students, especially those from rural areas, may have to face to reach their exam centres, the Minister said that the Transport Minister will be appealed to consider the Hall tickets as pass and allow students to travel in KSRTC buses.

Pointing out that the evaluation of II PUC answer scripts has already begun in full swing, the Minister said that the results will most likely be declared in July first week. The pending English paper exam will be held on June 18 as announced earlier, he said and added that the SSLC results will be declared by the end of July.