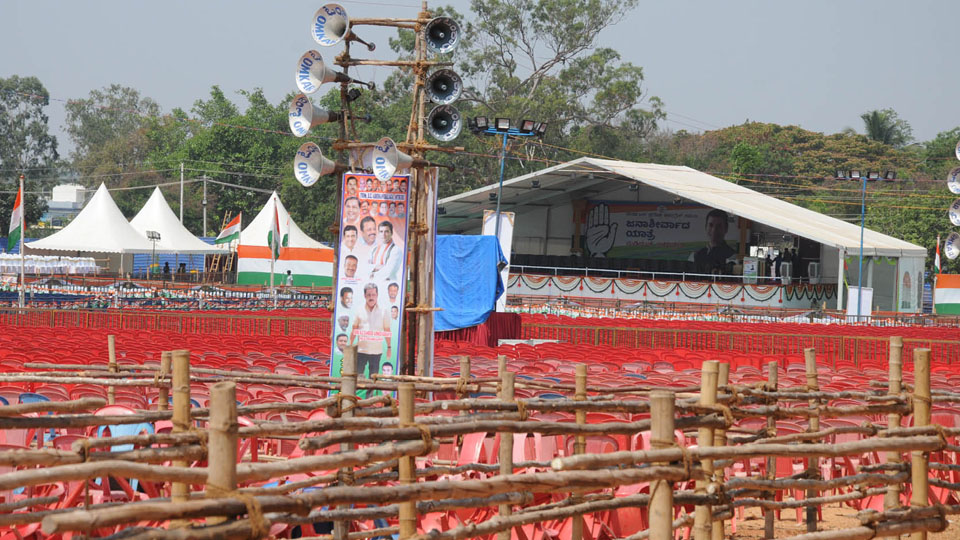 Nanjangud: A senior citizen from Nanjangud, who was ferried from his village to attend Congress President Rahul Gandhi’s rally in Mysuru on Mar.25, has not returned home till now. After running from pillar to post and even approaching political bigwigs, his desperate family members have now lodged a Police complaint.

The missing senior citizen is 65-year-old Rangadasaiah from Konanuru village in Nanjangud taluk and he is a voter from Varuna, the constituency represented by Chief Minister Siddharamaiah.

As part of his ‘Janashirvad’ Rally, Rahul Gandhi held a massive rally at the Maharaja’s College Grounds and thousands of people from villages were ferried in buses and trucks by the Congress party to mobilise crowd. Rangadasaiah was in the private bus that took over 40 people from Konanuru on the morning of Mar.25.

The Congress rally concluded by 8.30 pm and as per plan, the villagers were carried back to Konanuru in the same bus and the vehicle returned at around 9.30 pm. But Rangadasaiah did not return. His son Kumar then spoke to a couple of villagers who told him that there was a massive crowd and they had waited for Rangadasaiah before heading home.

Kumar then searched for his father at the houses of his relatives and approached the Lakshmipuram Police in city where he was issued an NCR for his complaint. Kumar continued his search and lodged a complaint at Kavalande Police Station on Apr.1 and a missing person complaint was registered. Konanuru comes under Kavalande limits.

In the complaint, Kumar has named Puttarangaiah, Lingaraju, Naga and Sodaiah, local Congress leaders and has stated that they had taken the responsibility of ferrying back his father safely from the rally but failed to do so. The Police, on their part, had passed on the missing person’s information to all Police Stations but so far, Rangadasaiah has not been traced. Family members have blamed the Congress leaders from Konanuru. Kumar is a daily wager and since Mar.26, he has been searching for his father in Mysuru and Mandya and he has not gone to work since then. Family members said that while taking Rangadasaiah to the rally, he was offered Rs.2,200, the amount fixed per person (along with food) to attend Rahul’s rally.

The family members also met the Personal Assistant (PA) to CM Siddharamaiah who telephoned the jurisdictional Police. Investigating the case, the Police have questioned all those who had accompanied Rangadasaiah from Konanuru. They, however, claimed ignorance about seeing Rangadasaiah at the rally.