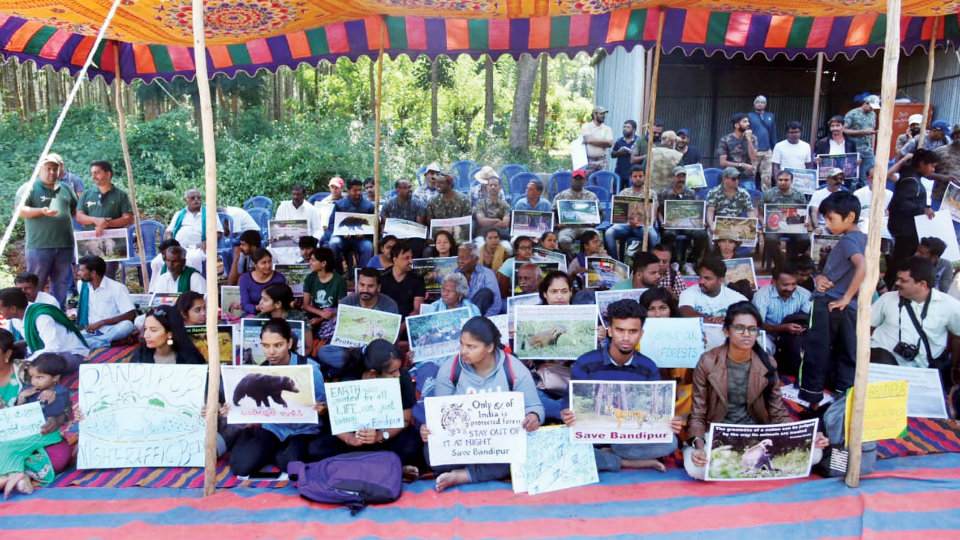 Mysuru: Hundreds of wildlife enthusiasts, activists and conservationists from diverse backgrounds came together this morning at the entrance of Bandipur Tiger Reserve near Maddur Range Check Post to raise their voice against the government’s proposed elevated corridor that cuts through Bandipur Tiger Reserve. The venue of the protest was between Gundlupet (Chamarajanagar) and Sultan Bathery (Kerala).

Holding placards and squatting on the ground under tents, they staged a silent protest and the crowd consisted of techies, businessmen and other professionals who are concerned about environment. This is the third such protest held in a fortnight against the destruction of forests.

It may be recalled here that on Oct. 11, protesters gathered in front of Deputy Commissioner’s Office in Mysuru and urged the government to drop the elevated road plan. On Oct. 21, nature lovers, wildlife enthusiasts and environmental activists staged a protest at Melukamanahalli Arch, the entry gate to Bandipur Tiger Reserve against the elevated roads via the forests that will cause widespread destruction of flora and fauna.

According to protesters, they have been networking with #nighttrafficbeda, #bandipurforever, #noelevatedhighway and #peopleforbandipur on the social media and the protest is being held without an umbrella organisation and without naming any particular organisation in view of garnering widespread support.

Activists said that a campaign to save Bandipur, to protect and preserve our flora and fauna has been initiated through a series of protests. “The move to lift the ban on night traffic on Bandipur Highway and to construct elevated Highways to facilitate traffic will be detrimental to our forests and wildlife.”

“Traffic-related accidents have killed innumerable wild animals in this region. The numbers saw considerable reduction after the night traffic ban was initiated. Lifting the ban will pose grave danger and increase the possibility of accident related deaths of wild animals, especially the endangered tiger,” they said.

“In Karnataka we have only 6 percent of its land mass under wildlife habitats. If caution is not exercised to preserve them, soon we will be left with no wildlife in our forests. Without wildlife species, our forests will disappear. If the forests are eroded, our rivers will be filled with silt. Without water we will die,” they cautioned.

Several techies from Mysuru and Bengaluru who pooled in money for transport and other expenses to participate in the protest said, “We are here to save Bandipur. We are for night-traffic ban and against the elevated roads inside the tiger reserve.”

Apart from Bengaluru, wildlife lovers, activists and farmer groups from Mysuru and parts of Kerala and Tamil Nadu are part of the protest. In fact, this is the first time that so many people from diverse backgrounds are coming together for a wildlife cause,” said one of the coordinators for the protest.