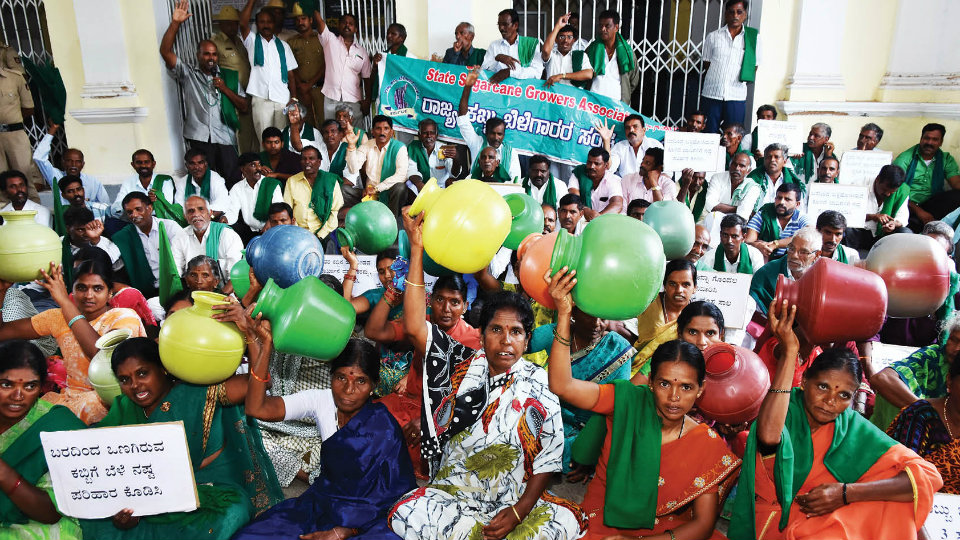 Mysuru: Seeking fulfilment of their various demands, more than 200 farmers, under the banner of Karnataka State Sugarcane Growers Association and Federations of State Farmer Associations, staged an empty pot demonstration in front of the Deputy Commissioner’s (DC) office here yesterday.

The demands included drinking water in all villages, starting of sugarcane crushing in factories, redressal of hassles in the State Government’s farm loan waiver scheme, execution of lift irrigation projects, introduction of open auction at all APMCs in order to end middlemen menace, solution for Aadhaar Registration and correction problems, hiking of financial benefit from Rs.6,000 to Rs.12,000 under the Kisan Samman Yojana, covering all crops under Pradhan Mantri Fasal Bima Yojana (PMFBY) and filling up of water bodies and release of water in canals, among others.

Addressing the farmers, Association President Kurubur Shantakumar hit out at the ongoing political drama in the State.

Seeking the Governor’s intervention to end the political crisis triggered by the resignation of MLAs, Shantakumar alleged that politicians were playing dirty games when the State was reeling under severe drought and the farming community was in deep distress due to crop   loss and debts.

Asking the Government to come to the rescue of the farmers, Shantakumar warned of a severe agitation if their demands were not met.

DC to hold meeting on July 15

Deputy Commissioner Abhiram G. Sankar has convened a meeting at the Zilla Panchayat (ZP) auditorium on July 15 to discuss problems faced by farmers of the district.

The meeting will be attended by district-level officials of various Departments and farmer representatives. The DC’s assurance came after farmers staged a demo in front of his office yesterday urging for redressal of their grievances.