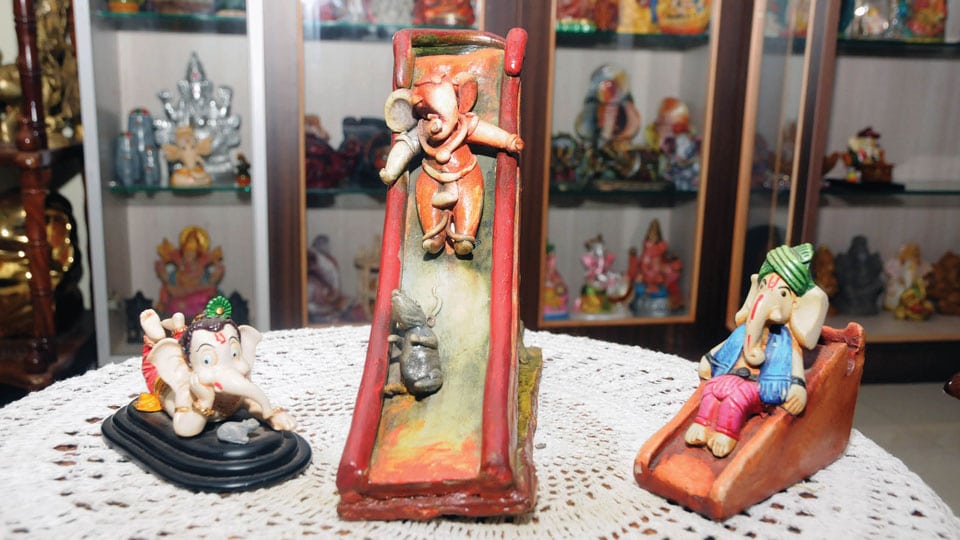 From key chains to massive idols, miniatures to murals… a nine-faced one to the one sitting on a Swan and in Gowri attire, the elephant-headed God can be seen in over 2,000 forms at these two passionate couples’ abode in city

Creativity, it is said, consists largely of rearranging what we know in order to find out what we do not know. Hence, to think creatively, we must be able to look afresh at what we normally take for granted.

For the couple T.V. Venkatram and Pushpa, residents of Vijayanagar 3rd Stage, rearranging their massive collection of Ganesha idols every year is not just another routine! It’s creativity at its best, a time to re-look at different aspects of life. And the new themes they come up with, in their arrangement every year, is ample proof to this.

Ganesha, widely revered as the God of intellect and wisdom and a patron of art, has always lent Himself to be depicted in different ways! Ganeshas of all shapes and sizes, all forms and stances, from key chains to massive idols, miniatures to murals find a pride of place and are impeccably arranged here. 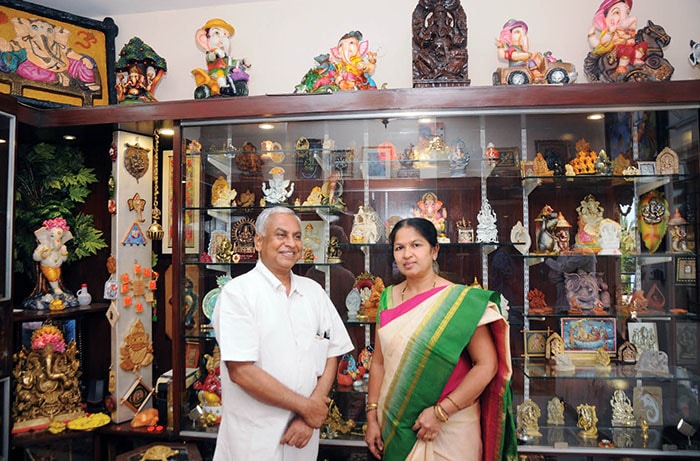 The couple have been ardent devotees of Lord Ganesha and what started off as a simple drawing of 108 Ganeshas by Venkatram and embossed by Pushpa turned into a hobby of collecting Ganeshas. Venkatram, who was in a Central Government job (he currently works as Administrative Head for Kaynes Technologies) was posted in several places, which gave the couple ample opportunity to add to their collection of Ganeshas from all over the country. When Pushpa resigned from her job as HR Assistant way back in 2007, her colleagues from different departments who knew about her liking for Ganeshas, gave her 16 different kinds of Ganeshas as a parting gift. This rekindled her interest in collecting more, and today they have 989 Ganeshas in all forms.

As the collection grew, they did not want to lock up Ganesha in some trunk and bring Him out only during festival. Hence, they decided to build an exclusive floor to display Him in all his grandeur and divinity, all through the year.

Today, more than 950 Ganeshas are aesthetically arranged in a huge room and the rest arranged thematically in the adjoining balcony. As you enter, you will find a big glass enclosure, with a huge mural depicting the wedding scene of Lord Venkateshwara. Sitting below is a musical ensemble of Ganeshas. The wall in the balcony houses replicas of popular Ganeshas in the State, including Saasivekalu Ganesha of Hampi, Dodda Ganesha of Bengaluru, Idugunji Ganesha and Gokarna Ganesha. An India map on the wall has small replicas of Ganeshas of the respective States where the elephant-headed Lord is worshipped. 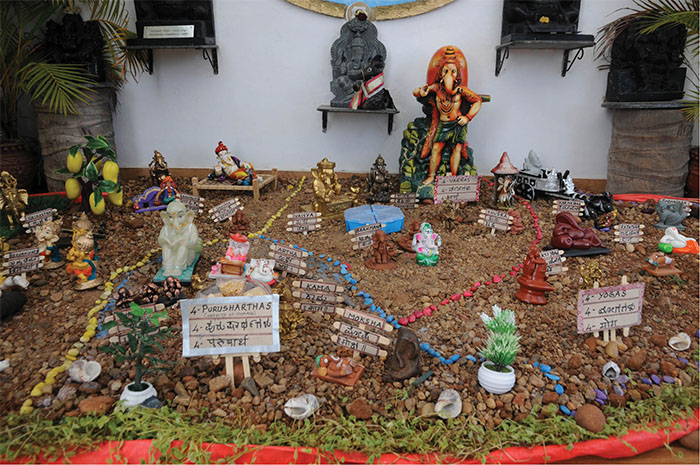 The crystal Ganeshas find space in between terracotta figurines, a huge Patchitra Ganesha from Orissa sits majestically on the wall looking up at Bal Ganeshas perched atop the opposite wall, riding a scooter, a cycle and even a horse ! Ganeshas made of bamboo, jute, coconut shells, sola wood, paper mache and even painted with coffee are displayed. A huge intricately made brass Ganesha finds a pride of place here, as another enchanting luminous one, playing the flute under a tree, stands above this.

Two Ganeshas painted on rice grains have been gifted to the couple by an artiste from Bengaluru and this creation finds a place in Guinness Book of Records. A big black stone Ganesha sits majestically across the balcony in a thatched hut and seems to monitor the others in the room.

Apart from this display throughout the year, Venkatram and Pushpa have a new theme displayed every year for 15 days during Ganesha festival. This year an outline of an elephant’s trunk depicted different stages of life according to Hindu Dharma — Brahmacharya, Gruhasthashrama, Vanaprastha and Sanyasa and the Varnashrama, the divisional structure of the Indian society. The four Vedas were also depicted and finally the journey towards the Paramathma. Different forms of Ganeshas are used in these depictions.

The display is open to public throughout the year and during Ganesha fest the guests are treated to prasadam, soulful music and melodious bhajans. 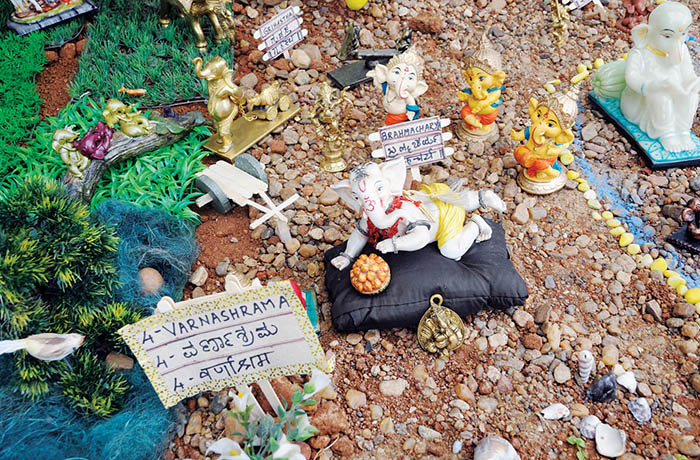 Friends who know about the couple’s passion for Vinayaka bring in some more to add to their collection. With the collection, their faith in Ganesha too has grown and they owe everything to Him. The Lord, who is believed to be a remover of obstacles, has been their guiding light.

Ganesha is beyond all castes and is the most endearing personality for millions around the world. No wonder He is created in every possible style and He reflects almost every character we meet in life…He lives with us in all His forms…”

For T.R. Santhanam and his wife Vijaya Santhanam, who have a collection of over 1,500 Ganeshas at their residence in JP Nagar, Ganesha is a dear family member who resides with them in all shapes and forms. 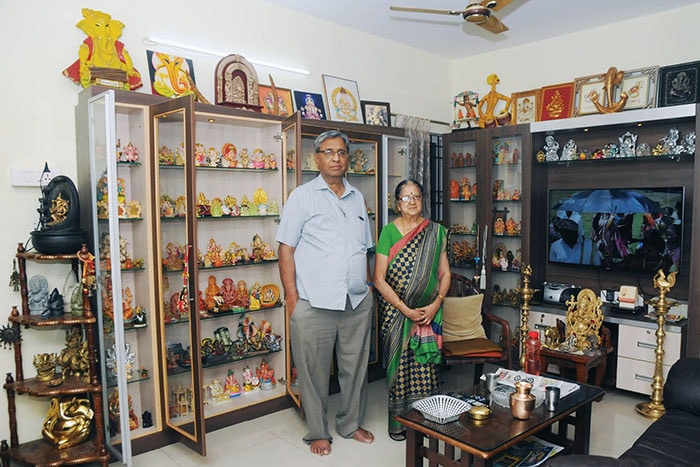 Santhanam, who works as the Director of Accounts and Audits at JSS  Mahavidyapeetha, retired as the Deputy Director of Indian Audit and Accounts Service. When he was on deputation at the Vidhana Soudha 25 years ago, he was gifted with an ivory Ganesha which was so attractive that the couple decided to start collecting more. That set the passion rolling and from Jabalpur to Dubai, America to Orissa, Bahrein to Mumbai, Ganesha came into their house from all over. 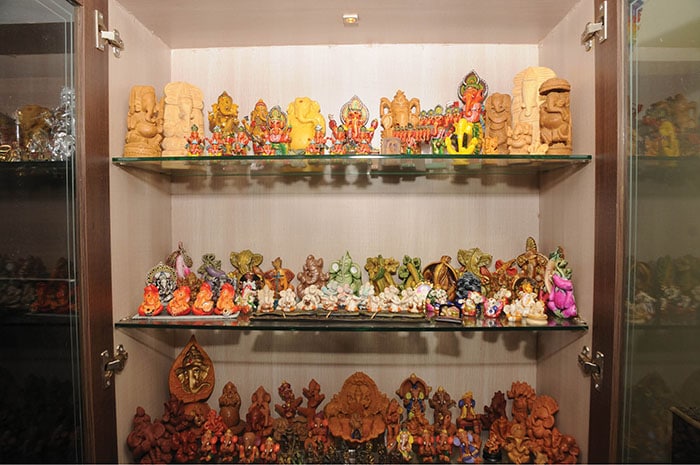 A two-faced Ganesha, a nine-faced one, Ganesha sitting on a Garuda, on a Swan and an Elephant, Ganesha in Gowri attire, in the form of Nataraja, in Dashavatara, on a Yacht are some very rare pieces in their fabulous collection. Another strikingly beautiful idol is a Ganesha dressed in a lawyer’s attire, which was gifted to the couple 46 years ago as a wedding gift. Ganeshas on the slippery slide, on a park bench, in the library, playing drums, inside a crystal bell, carved in vegetable shapes, in sandalwood and ceramic, bamboo and another made from the Calotropis Gigantea plant (known as ekkada gida in Kannada), Kinnala art Ganeshas are so intricately made and displayed equally well. The speciality of the collection is that not a single figure is duplicated !

Vijaya Santhanam, a versatile musician and a very talented artiste, has sketched and painted several Ganeshas. Her sketching of Ganeshas for every Zodiac star, with details of what each one stands for, its significance and where these idols of Ganeshas are located has earned her a lot of appreciation. Santhanam also has a huge collection of Ganeshas cut carefully from the several invitation cards he gets ! For the couple in their early 70s, age isn’t a deterrent at all! Their patience and skill in collecting and arranging the Ganeshas has only grown with every new addition, as they so affectionately connect with every single Ganesha around.